Under increasing pressure from his own party and his own terrible campaign, CDU candidate Armin Laschet decided to include more faces in his campaign and present a “team for the future”. Not surprisingly, the execution wasn’t great.

The mise en scéne left him standing alone on stage for long, awkward gaps between each one, the status of the team is completely unclear, and its composition included an odd combination of apparently promising second line politicians from the states and, ah, Friedrich Merz. This points to deeper, structural issues. For a start, if the idea was to show that the CDU has a deep bench of talent, what was 66-year old Merz who’s been a politician since Dad was a lad doing there? Is it just that his notoriously enormous ego won’t let him pass up publicity of any kind? If so, is it just that Laschet is too weak to say no to him?

If they’re meant to be a shadow cabinet, there are other problems. For a start, Laschet is only going to make it as part of a coalition, and probably a three-party coalition, so he can’t really promise individual jobs. And there are, of course, perfectly good CDU federal ministers currently in office. Promoting anyone for a specific job that’s already held by a CDU minister amounts to promising to fire the incumbent and disavow everything they did.

Here’s the rub. The biggest issue for the CDU at this election has been whether to own the Merkel legacy or distance the party from it. The choice of candidate revolved around whether to go with a wholehearted candidate of continuity (Norbert Röttgen, or perhaps the post-2017 version of Markus Söder) or a clean break (Merz). The party of compromise decided to compromise and that’s how we got here.

The problem, really, is that Merkel created a new political coalition, on which her success is founded.

This coalition runs diagonally, as the Germans say, across politics including a chunk of the SPD’s traditional voting bloc and mobilizing women, immigrants, and non-Catholics, groups with whom the CDU usually struggles. I wrote about this here, arguing among other things that the coalition’s organizing principle was that it set its own European or global outlook against nationalists or even local particularists. Diagonal coalitions in Germany go back to Bismarck, and the importance of particularism much earlier, but despite this transformation of the CDU electorate, there was no such transformation of the CDU as a party. The three candidates for the succession, all men, all Catholics, and all lawyers, all came from a 90km triangle in in the northern Rheinland.

Keeping this coalition together requires owning the Merkel legacy, which shouldn’t be that hard. Albert Funk writes that the team showed the CDU as Merkel left it – more liberal, more diverse, and more open to the world. The problem, though, is that the party is unwilling to fully own this even though it remains popular. To take the limiting case and the one Merkel initiative everyone asks you about, 62% of Germans think the country will cope just fine with another wave of refugees: 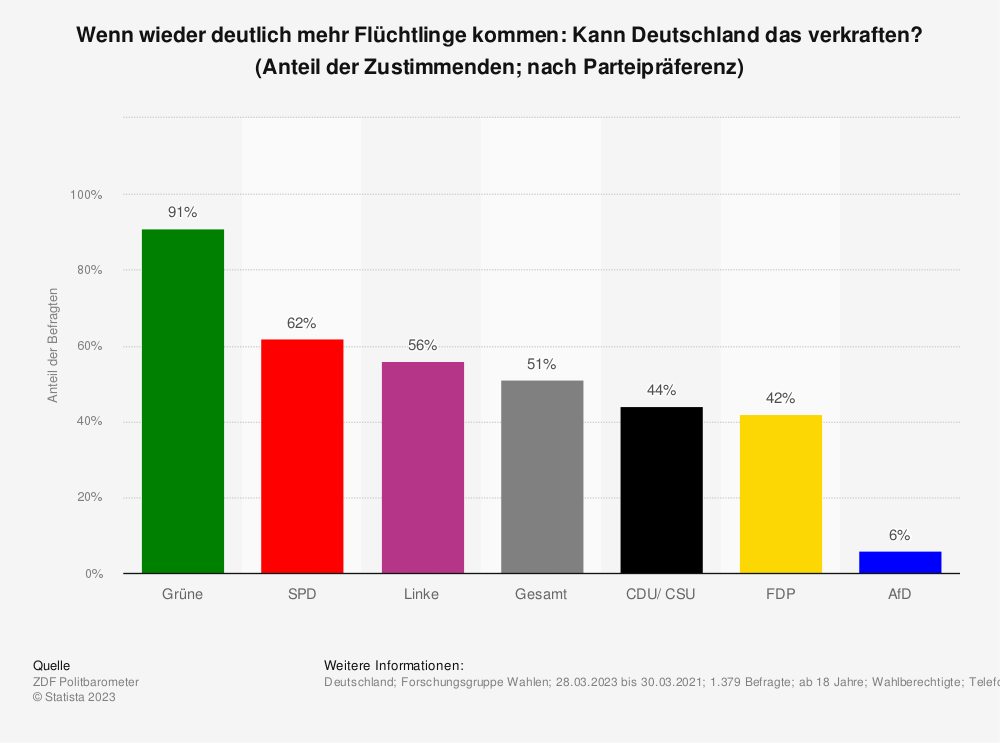 And if you’re in the Merkel coalition, there’s an obvious choice. The SPD was often criticised for being too close to the coalition, but with Merkel gone and the CDU unclear about whether it really believes in what it’s been doing since 2005, that logic now cuts both ways. The coalition exists, and you can run towards it!

1 thought on “Zukunftsteam: the future of the Merkel coalition”