If you’re really good at making a pigs ear of things, why not join the EU? Of course, this is not meant as a piece of solid advice, rather it is a cry of frustration at being impotently forced to watch so many things done so badly, each in turn, and one after the other. Southern Europe’s problem is essentially a competitiveness problem, and not a fiscal one, and if many states have been having growing difficulty with their negative fiscal balances, this is a symptom of the problem, and not its cause. Even in the worst of cases – countries like Greece and Portugal – the rising recourse to fiscal outlays has been a response to lack of “healthy” growth, and the root cause of this continuing difficulty in generating real growth has been the underlying lack of competitiveness, and the inability to export your way out of trouble once the burden of debt starts to rise, so simply pruning the fiscal side isn’t going to cure the problem, and by now that simple point should be obvious, I would have thought.

Naturally a lot of financial markets attention has been focusing recently on whether or not the Euro is about to unravel. Even the ever-so-prudent Ralph Atkins winds up his mamoth “Defiant Berlin” review with a quote from JÃ¶rg KrÃ¤mer, chief economist at Commerzbank in Frankfurt who says the next few years may see the eurozone becoming more of a â€œtransfer unionâ€, one in which better performing countries have to help out weaker members. â€œThat” – he argues – “could mean Germany says, â€˜we are no longer willing to support the weaker parts of the EUâ€™, while the Greeks say that they are not prepared to have policy dictated by the Germans,” Thus: â€œThe risk cannot be totally excluded of a eurozone break-up within 10 to 15 years â€“ and this is a consequence of widening eurozone divergences.â€ To which Atkins adds “If that risk rose, Europe would be facing a very different ballgame”. You bet it would!

To some extent I cannot help feeling that a congenital inability to take bite-the-bullet type decisions is resulting in an ongoing process of passing the buck ever onwards and upwards. The latest exemple here is the issue of IMF involvement in the Greek adjustment process. Now, as with any issue, there are good reasons and there are bad reasons why IMF involvemnet might be considered desireable. Among the good reasons are the vast experience and technical expertise of the fund, or the fact that representatives of the IMF might find it easier to say “no”, given that the underlying sovereignty issues are not exactly identical when posed in terms of the IMF as they are in terms of the EU.

But among the bad reasons would be the idea that the IMF could fund any eventual Greek loan more cheaply. As far as I can see, a lot of the EU interest in having an IMF loan to Greece stems from the need to make the rate of interest applied cheap enough to bring the spread down. This is an important concern, since it is not obvious why a country which is making its best effort to put things straight should need to be paying an exorbitant charge for the money it borrows while it does this. Earlier this week European Central Bank President Jean-Claude Trichet spoke out strongly against offering the kind of low-interest loans for which the Greek government has been pressing – â€œThere shouldnâ€™t be any subsidy element, no concessionary elementâ€ in any eventual loan to Greece, he told members of the Economic and Monetary Affairs Committee of the European Parliament. And maybe this is the only reasonable position the ECB can take (given its Charter), but evidently the Eurogroup of countries are not bound by the same constraints and they themselves could do this (via recourse to Group-backed EuroGroup bonds, or whatever), which raises the obvious question: why don’t they?

Well, one of the reasons lying behind all the reluctance we are currently seeing may not be the issue of the German constitution, or even the question of changes to the Lisbon Treaty, or any of the major issues of principal which arise and would require lengthy and onerous debate. Maybe the question is a much more simple one: perhaps Europe’s leaders are simply worried that if they make a cheap loan to Greece, then Spain, Portugal, Ireland, Italy, Austria, Slovenia and Slovakia may all soon argue they also need one.

My view is that this is an issue where the EU itself needs to bite the bullet, and make large changes, ones which lead, as Wolfgang Munchau has been arguing, to much closer political union. If we need the IMF in Greece, and I think we do, it is for its proven capacity to implement programmes, and its extensive technical resources, NOT for the money.

Indeed the Indian economist Subroto Roy just raised a very important issue in this regard on my Facebook. If IMF funds are used to bailout Greece, wouldn’t that be a bit like the poor pampering the rich. Shouldn’t IMF money be being used for other things? Shouldn’t the IMF have other priorities? Evidently stabilising Europe is important, but shouldn’t the EU be doing that (and not just as a matter of pride, as a matter of international solidarity)? As Roy asks, what happens if…

“the US, Britain, ANZ and everyone else in the IMF who is not in the Eurozone…. (decide to)… legitimately ask why the effective subsidy of Greece by its Eurozone partners should be transferred to the rest of the world … (after all) …. the Europeans have enough clout in the IMF to, say, insist some of their own IMF-directed resources be directed towards Greece specifically, which would spell the unravelling of the IMF if it became a general habit.”

On a slightly different, but somewhat related topic, I basically agree with a lot of what Martin Wolf wrote in his Excessive Virtue piece in the FT yesterday. As Martin points out, in saying “nein” to those who suggest that its economy should become a little less competitive what the German government is effectively saying is that the eurozone must become some kind of greater Germany – a huge export machine which generates a massive surplus with the rest of the world, a surplus which enables all those highly indebted member countries to pay down their debts. But, as Wolf argues, this policy would have profoundly negative implications for the entire world economy.

He cites the German secretary of state Ulrich Wilhelm, who, in a letter to the FT, argues that:

â€œThe key to correcting imbalances in the eurozone and restoring fiscal stability lies in raising the competitiveness of Europe as a whole. The more countries with current account deficits are able to increase their competitiveness, the easier they will find it to decrease their public and foreign trade deficits. A less stability-oriented policy in Germany would damage the eurozone as a whole.â€

This worries Wolf, who argues that Mr Wilhelm is inviting everybody to join a zero-sum world of beggar-my-neighbour policies in which every country tries to grab market share from the rest (strange how all of this sounds very similar to the way things wound up back in the 1930’s, now isn’t it?). As he suggests, at a time of generalised global weakness, this is a self-defeating recommendation for both the eurozone and the world. If we take a look at Japanese exports, which after an initial surge, are basically now near enough to being stationary, it is obvious that deficient aggregate demand in Europe is now part of the problem: 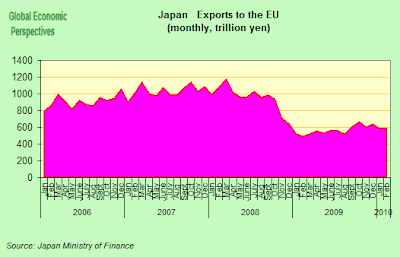 And obviously with all the fiscal pruning and “good housekeeping” we are now about to see, this problem is set to get worse, not better. Being well apprised of the problem Wolf then goes on to put forward an alternative:

“An alternative solution might be to help the world absorb larger export surpluses from the eurozone, the US, Japan and the UK. True, no sustainable exit from the present quagmire can be envisaged without increased net capital flows into emerging countries. It also seems evident that this is where the worldâ€™s surplus savings ought to end up. But it is going to take time and much reform to make this happen.”

Really, I entirely agree, but a quantum leap in thinking is necessary here. If the books are to balance – and if we want growth and pensions in the OECD then they have to – what we need to do is help cheaper finance reach those countries with capacities to grow and absorb others exports, while the EU takes on in-house responsibility for sorting out the financing (but not necessarily the disciplining) of its own members. That is, if cheap loans need to be provided to anybody it is to those in need in the Emerging Countries, and not to Europeans who have happily spent their own way into difficulty.

In fact, in my New Year questions to Paul Krugman I raised some sort of similar point, but unfortunately his response was not exactly positive.

E.H.: One of the standard pieces of economic observation about countries recovering from financial crises is that their recoveries are export driven. This has now almost attained the status of a stylised fact. But as you starkly ask, at a time when the financial crisis is generalised across all developed economies – whether because those who borrowed the money now have difficulty paying back, or those who leant it now struggle to recover the money owed them – to which new planet are we all going to export? Maybe we donâ€™t need to look so far afield. Many developing economies badly need cheap and responsible credit lines, and access to state-of-the-art technologies. Do you think there is room for some sort of New Marshall Plan initiative, to generate a win-win dynamic for all of us?

P.K.: Um, no. Not realistically as a political matter. Weâ€™ll be lucky if we can get the surplus developing countries to spend on themselves. My guess is that our best hope for recovery lies in environmental investment: taking on climate change could, in terms of the macroeconomic impact, be the functional equivalent of a major new technology.

So the solution to our problems is not politically realistic. And meantime we keep trying to play around with policies which simply won’t work. It is now pretty clear to me at least just how so much valuable time was lost back in the 1930s, thrashing around playing with solutions which didn’t, and wouldn’t, work. As Krugman himself likes to say, “history has a habit of repeating itself, the first time as tragedy, and the second time as yet another tragedy”.

23 thoughts on “Why Not Unravel The IMF Too While We’re At It?”