Spain’s troubled banking sector is back in the news again. Despite the apparently succesful stress tests carried out over the summer problems persist, and don’t seem likely to go away soon. Foremost among these is the steady rise in problem loans which have now risen to an all-time high, potentially endangering the credit rating of the country’s financial institutions, according to a recent report from the credit ratings agency Moody’s.

In fact distressed loans in Spain’s banking system reached 102.5 billion euros as of August, according to the latest Bank of Spain data. At 5.6% of the total this is the highest proportion of overall loans since 1996. “The performance of the commercial real estate sector has been the main driver of overall asset quality deterioration,” Moody’s said in their report. Evidently asset quality deterioration in Spain’s banking system is likely to continue both this year and next, driven by oversupply in the property market, the impact of the real estate crisis on the larger economy, and the continuing high unemployment levels.

The warning about the potential impact of the continuing rise of so called â€œnon-performingâ€ loans has also been reiterated by the Bank of Spain itself, who draw attention, in their latest Financial Stability Report, to the fact that the banking system is very likely to face a further increase in problem loan ratios in coming quarters, an admission which effectively constitutes a revision of last Aprilâ€™s IMF forecast that such loans would peak in the third quarter of 2010. Unfortunately the number of distressed loans continues to rise, and the end of the problem is not yet in sight.

Indeed the latest Moodyâ€™s report comes at a time of growing uncertainty for the sector, with Spain’s two largest banks – Banco Santander and Banco Bilbao Vizcaya Argentaria – both releasing earnings results which disappointed the markets and gave evidence of the significant pressure they have on their margins. A further indication of the pressure they are under can be found in the fact that they have publicly attacked the slow pace of reform among the savings banks, arguing that these are using the billions of euros from the public restructuring funds to compete unfairly by offering uncompetitive rates to attract deposits. Cajas are offering rates of up to 4.75% in order to build their deposit base, which they urgently need to do given the difficulties they have attracting finance in the wholesale money markets. The large banks argue that such campaigns are bound to generate losses in the longer term and that such behaviour is unacceptable for institutions receiving public aid.

Emilio BotÃ­n, Santander’s chairman, was first out of the box with a speech to business leaders which criticised the â€œinadequateâ€ speed of restructuring at the cajas and called for more concrete plans to cut capacity and improve margins. Then Angel Cano, chief executive of BBVA, added his voice calling for a speedy completion of the restructuring process so that bankers could begin 2011 â€œwith equal conditions and on a level playing fieldâ€.

In another sign of the pressure they are under Spain’s banks are starting to sell-off some off their most valuable branches. One popular way of doing this is to sell them and then lease them back again, a move which allows them to record a short-term transaction gain, one which can then be used to absorb and conceal losses sustained in their mortgage loan book.

According to an analysis carried out by the Wall Street Journal BBVA is about to register a gain of â‚¬233 million on a sale and leaseback of offices and buildings to a real-estate investment consortium led by Deutsche Bank AG’s RREEF. The proceeds will then surely go directly toward into the bank’s provisions against bad loans. Banco Sabadell also completed a similar â‚¬403 million deal in May, in which it sold and rented back 378 offices and other properties. And Caja Madrid, one of the country’s largest savings banks, is reportedly looking at similar deals, following its own branch sales last year and a separate â‚¬108 million, 30-year sale-and-leaseback agreement with a unit of the German fund S.E.B. Asset Management AG in May. According to the WSJ Caja Madrid is currently in talks with investors to sell a somewhat larger package of branches, valued at â‚¬300 million, according to a spokesman for the savings bank.

And a further sign that all is not well – the banks are still having difficulty issuing covered bonds, with Spain’s domestic banks currently paying a full two percentage points above the bank borrowing benchmark, as compared with a mere 0.20 percentage points before the European sovereign debt crisis erupted, according to Barclays Capital analysts Carlos Cobo Catena and Tom Rayner.

This difficulty is underlined by the evident fact that Spanish banks are falling behind their counterparts across Europe in reducing their dependence on emergency central bank funding. While Euro Area banks cut their collective borrowing in September to 514.1 billion euros, the least since the Lehman Brothers collapse in September 2008, Spainâ€™s banks continued to borrow 97.7 billion euros, still well above the 85.6 billion euros they borrowed in May this year, just before the debt crisis broke out. 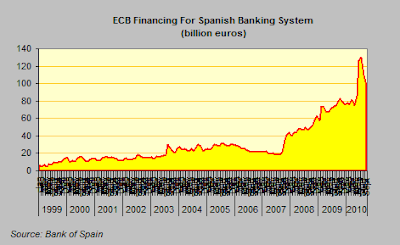 With the Bank of Spain pressuring them to increase their provisioning for properties held on their books, the banks have been vigorously attempting to move it off them, often promoting attractive property deals on their websites, and in some cases even offering 100% financing and other deals on mortgages in an effort to sell their growing mountain of real estate, which normally comes to them through debt for asset swaps or foreclosure. But, with the sales market sluggish to virtually non-existent, banks are increasingly looking towards renting a part of their empty stock, on occassion transferring the targeted property directly from the developer to one of their off-balance-sheet subsidiaries. Banks aren’t required to set aside as many provisions for assets which carry a rental stream, and none at all for assets they do not formally own.

The absence of a liquid market in Spanish housing is causing more and more problems. Before the crisis set in, homeowners who found themselves in financial difficulties had, for example, been able to sell their houses relatively easily, repay their outstanding debts, and start all over again. However, times have now changed, selling the property at a price which lets them clear the mortgage is increasingly difficult, and the banks, under pressure from their bottom line, are increasingly resorting to mortgage foreclosure. “Although lenders have historically not particularly liked extra judicial enforcement, it has become a solution among Spanish lenders in areas where the courts are saturated by cases and the foreclosure of a property may prove more speedy than the traditional enforcement procedure” says Alberto Barbachano, a Moody’s Vice President and author of a recent report on the subject.

In fact Moody’s argue that the very high reported number of foreclosed mortgages that have been taken to court in Spain since 2007 underestimates the actual number of properties that have been repossessed by Spanish financial entities for two reasons. First, because more than one property may have been involved per individual foreclosure process. And second, because Spanish mortgage lenders have generally become more willing to sign up to voluntary agreements, accepting the property as payment in kind and then releasing the debtor from the debt.

At the present time the consumer protection organisation Adicae estimate that 1.4 million Spaniards are facing potential foreclosure proceedings, and the number is likely to continue to rise in the months to come. A recent Standard & Poorâ€™s report found that 8 percent of Spainâ€™s housing is now worth less than the value of the mortgage, and with prices continuing to fall, and some experts believe that figure could rise to 20 percent before the price contraction is over. So with unemployment, problem loans, and property foreclosures all rising, the only thing that seems to be falling steadily towards earth is the level of bank profitability. It is only to be hoped that with their untimely descent Spain’s banks donâ€™t bring the whole edifice of Spanish economic activity (and with it the institutional structure of the Eurozone) crashing down behind them.