According to the 2009 budget Barack Obama is sending to congress today, the United States will have a $1.75 trillion deficit this year. The figure represents 12.3 percent of estimated gross domestic product, double the previous post-war record of 6 percent in 1983, and the highest level since the deficit totaled 21.5 percent of GDP in 1945, at the end of World War II. It seems the numbers are about to start getting let out of the bag, and it will be interesting to see how the markets react. You can find many more details here.

Now if you look at the chart below (prepared by Lazard for a presentation on consumer deleveraging) you will see that this is not the first time something like this has happened. The earlier peak in US indeptedness occured (of course) between 1930 and 1933, when total debt peaked at 299% of GDP. In fact total debt expanded quite rapidly between 1930 (211% GDP) and 1933, largely as a result of GDP contraction and price deflation (which is why it would be preferable not to see extensive price deflation this time round). As a result, while private sector debt contracted between 1930 and 1933, public sector debt held steady, and rose from 34% of GDP to 72% of GDP (for better viewing click on image, and try zooming in a bit. Sorry, that’s the best I can do/suggest). 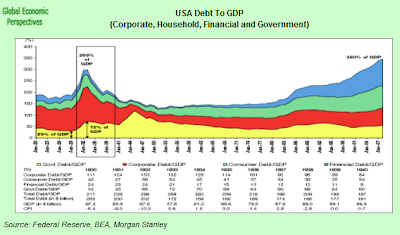 This is the phenomenon we are seeing now. If the stimulus programme is successful then we might see US debt to GDP stabilising around 2013, since the deficit is expected to remain around $1 trillion for the next two years before starting to decline to $533 billion in 2013, according to budget projections.

So what is likely to happen to prices? Well, if we look at the chart below, we can see that US consumer price inflation was pretty lacklustre right the way through from 1920 to 1940 (that’s why I called the whole interwar epoch a deflationary one in my last post), so I guess, if we’re lucky, we might get to see some serious inflation around 2020. If history is any guide that is, which ain’t necessarily the case, but still. 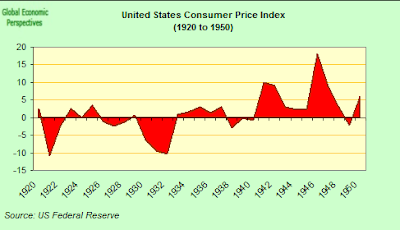