Well, Paul Krugman certainly got it right on this one, the Great Depression may now reasonably be considered to have arrived in Ukraine. Ukraine’s GDP declined 20 percent in January year-on-year, according to Valeriy Lytvytsky chief advisor to the chairman of the National Bank of Ukraine. “The decline in GDP in January was about 20 percent according to my reckoning. It’s the biggest drop ever. It’s a bad start,” he said. According to Lytvytsky the construction and industry sectors have been the hardest hit by the economic crisis.

The Statistics Office don’t produce detailed information on the month by month movements in GDP, but using the raw data they do provide I have calculated the monthly growth rates, and have produced the chart below, which gives a pretty clear idea of what has been happening. 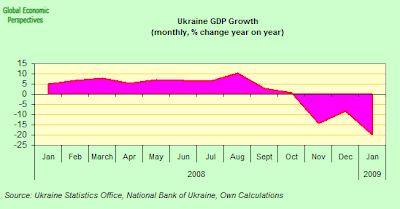 Industrial output fell in January for the sixth month in a row, with a 16.1 percent decline between January and December 2008. This was the biggest decrease since January 1994, when there was an 18.6 percent drop. Industrial production in January was 34.1 percent down on January 2008. The year-on-year decline in construction also increased ten-fold, hitting 57.6 percent, Lytvytsky said. 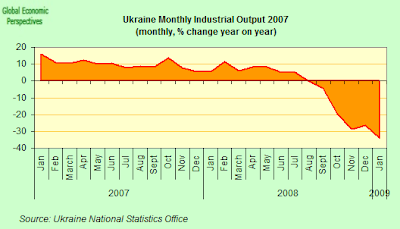 “At the start of last year there was one sector in recession – construction. All the rest were in positive territory. Now only one economic sector is growing – agriculture – with growth of 0.5 percent, within the margin of error. All the other basic industries, which account for about 80 percent of GDP, are contracting.”
Valeriy Lytvytsky

Unfortunately this may well be the last month for which I can do this kind of calculation and comparison, since the State Statistics Committee will not be publishing monthly GDP results (as in the past), starting this January and (ironically) as a result of the move to harmonise Ukraine methodology with international-standard, quarterly reporting. I say ironically, since in this case we will be trading short term insight for longer term precision. However, the office will continue publishing monthly results for individual economic sectors like agriculture, industry, construction and transportation, so we maywell be able to invent some kind of “proxy”, just to keep an eye on what is happening in more or less real time.