According to an article which appeared in the Spanish newspaper Expansion this morning, one in five Spanish mortgages is now considered as being high risk and liable to become “non performing”.

The mortgages at greatest risk are naturally those contracted after 2005 where the loan to valuation was over 80% of the total. In 2006 and 2007, according to data from the bank of Spain, LtVs were over 80% in 17.7% of the mortgages granted, since prices are now heading back towards the 2005 level, we can easily conclude that something in the region of one in five Spanish mortgages are now high risk.

Prior to 2006, the main source of data comes from a study by Genworth Financial, who show that loans with +80% LtV rose from 12.2% in 1996 to 26.4% in 2005 (see chart below which comes from Expansion). These loans were especially popular between 2003 and 2006, but then started to decline as the decision of the ECB to raise interest rates made the likelihood of a price correction rise sharply. 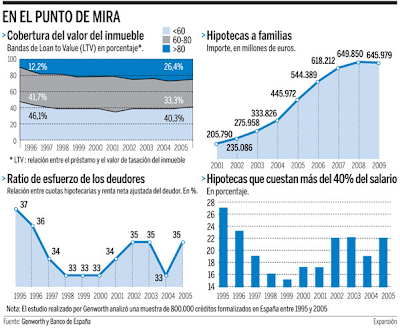 The other key indicator for risk of mortgage default is, of course, the proportion of income devoted to servicing the loan. This has risen, according to Bank of Spain data for the second quarter of 2009 to an average of 38.6% of disposable income.

This figure is down sharply from the 46% reached between 2006 and 2008 largely as a result of the drop in interest rates. This is the plus side of over 90% of Spanish mortgages being variable interest. The boost to families with mortgages has been significant, and this is evident in the consumer confidence surveys.

But there is a downside here. Spanish households are now extraordinarily vulnerable to any rise in interest rates.

Secondly, people feel better because of the improved cash flow situation, but are probably not looking at the capital account side of their personal balance sheet. People with large mortgages and very high LtVs may well be better off by a few hundred euros a month, but the capital value of their investment may be sinking like a stone. In other words they are bleeding out money through the rear window. One day they will wake up to this, and find they are paying interest on a loan which is worth far more than the property they hold. Then, if there is no change in the bankruptcy law it is off to Australia, Canada or Brazil for many highly educated but heaviliy indebted young people, since as the Spanish law stands there is simply no way out from underneath this for them, ever. That is what those awkward little words “full recovery” mean.

Thirdly, Spain is now in deflation. This means that incomes will go down (over several year probably, if there is not one dramatic year of fall), and property values (which will remember correct against the general price index, that is they will also be further sucked down by the general level of prices) will also continue to fall. So the LtV will rise even as the proportion of income which needs to be paid to service a debt of which so many people were once so proud, but which they now find the be a millstone round their necks, will go up and up an up.

Meanwhile Bad loans as a proportion of total credit at Spanish lenders fell the first time in two years in June as savings banks reported a decline in defaults. The ratio fell to 4.6 percent from 4.66 percent in May and compared with a rate of 1.7 percent a year ago, the Bank of Spain said today on its Web site. Bad loans at Spain’s banks slipped to 85.6 billion euros in June from 86.7 billion euros in May and 31.2 billion euros a year earlier.

But to put this in perspective, the ratio of bad loans to the total has still tripled to 4.6% over the past 12 months. And the situation is worse than it seems, since according to a study by UBS Spanish commercial banks have clawed back about â‚¬10 billion in debt-for-property swaps. And this number does not include Spainâ€™s savings banks who do not disclose the relevant figure. If the position is similar to their commercial peers and we reclassify all these property purchases as bad loans, then the non-performing loan ratio would be 5.7% (before making any further adjustments for the loan restructuring which has been going on thanks to the availability of generous government and ECB funding).

In addition the central bank recently circulated new guidance relaxing the provisioning rules on risky mortgages. Until now, banks had to make provision for the full value of high-risk loans – those above 80% of the propertyâ€™s valueâ€”after two years of arrears. That was obviously far too demanding, since property values rarely fall to zero. However the timing of the change was far from inpeccable, and the new rules, which mean banks only have to allow for the difference between the value of the loan and 70% of the propertyâ€™s market value, give the impression of massaging rend results.

IÃ±igo Vega, an analyst at Iberian Equities, estimates that the new rules would relieve banks of the need to make provisions of about â‚¬22 billion in coming months (assuming non-performing loans only reach 8% by the end of 2010). To put that into context, Spainâ€™s savings banks, which are heavily exposed to developers, are expected to make profits of only â‚¬16 billion before provisions this year.

As the Economist said, deferring losses to maÃ±ana doesn’t change the extent of the difficulties facing Spainâ€™s financial system.

And just to confirm that Spain really is different, surreal almost, this article (in Catalan) explains that the majority of the long term unemployed who have gone to the employment offices to claim the 420 euro monthly payment they thought they had been promised have discovered …… that they are not in fact entitled. Apparently, according to the small print, you need to have run out of benefit and been declared unemployed AFTER 1 August 2009. This is Monty Python stuff, isn’t it?