We seem to be witnessing the arrival of some kind of new financial orthodoxy. The IMF put it like this in the Hungary Standby Loan Report (which by chance I was reading last night):

In emerging market countries with debt overhangs, the â€œKeynesianâ€ effect of fiscal adjustment is likely to be outweighed by â€œnon-Keynesianâ€ effects related to expectations and credibility. Non- Keynesian effects have to do with the offsetting response of private saving to policy-related changes in public saving. In particular, if fiscal adjustment credibly signals improved public sector solvency, a fiscal contraction could turn out to be expansionary, as private consumption rises based on the view that future tax hikes will be smaller than previously envisaged.
IMF – Hungary, Request for Stand-By Arrangement, November 4, 2008

So from Tallinin, to Riga, to Budapest, to Bucharest, the same sonata on a single note is being played, and the message is cut spending and you will expand. Funny how people are not very convinced about this idea in Berlin, London, or Washington.

Sounds like they haven’t heard about the paradox of thrift either.

Consumers are pulling back because theyâ€™ve realized that theyâ€™re too far in debt. The economy is shrinking in large part because consumers are pulling back. And the result, almost surely, is to leave household balance sheets worse than ever. I canâ€™t do this accurately until the Federal Reserveâ€™s flow of funds data have been updated, but almost without question the ratio of household debt to personal income has been rising, not falling, as consumers try to save more.

And today we learn that Dmitry Medevdevis is getting the gospel (via the evangelist Alexei Kudrin)and planning his own package of “expansionary” fiscal cuts for 2010.

Dmitry Medevdev, Russiaâ€™s president, on Monday ordered the government to prepare for a continuation of the economic crisis into 2010, delivering a markedly pessimistic view of the countryâ€™s economy and mandating wide-ranging budget cuts until now put on hold.

In an address to top government officials on the budget priorities until 2012, the president sided with the fiscal conservatives in an economic debate that has been raging within the Russian government since last autumn, over how much to cut spending in the face of the crisis.

One of the 10 priorities he announced was â€œtransfer to a strict regime of saving budget resourcesâ€. This year Russia will run its first budget deficit in the decade, projected at 7.4 per cent of GDP, which is to be funded almost entirely out of official reserves. Mondayâ€™s forecasts, which assume a price of oil of $50 per barrel in 2010, put the budget deficit of 5 per cent of GDP in 2010, falling to 3 per cent in 2011.

Mr Medvedevâ€™s remarks indicate the consensus view on the economy has been getting more bearish, in line with that of Alexei Kudrin, finance minister, who sees the crisis lasting longer than initial forecasts, which saw growth returning by the end of 2009.

Mr Kudrin said lower budgets deficits could only be achieved if the whole system of budget spending was reviewed. â€œA review of spending, a transition to targeted spending and saving â€“ these are the key words in the next three years,â€ he said.

Aleksander Auzan, an economist and director of the Social Contract Institute in Moscow, said the projections delivered by Mr Medvedev meant that the fiscal conservatives such as Mr Kudrin had won the debate for now.

Of course, as Krugman points out, the paradox of thrift normally operates in circumstances where monetary policy has been eased so far that interest rates are starting to get stuck around the zero bound, while Bank Rossii has been busy promoting ruble liquidity by pushing interest rates steadily up, although they have been eased slightly of late to 12%, still offering a yield which is very attractive in comparative terms and drawing in a growing crowd of carry traders who are systematically pushing the ruble to ever higher levels and weakening the export potential of Russia’s non-oil manufacturing sector in the process. 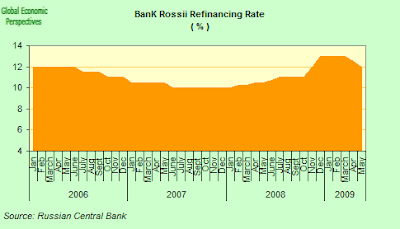 Russiaâ€™s ruble climbed to a four- month high against the dollar, headed for its longest run of weekly gains in almost two years, as surging oil prices and higher interest rates lured investors to the country.

The ruble jumped to as strong as 31.1607 per dollar today, the most since Jan. 14, and is poised for a 2.8 percent gain in the week, its sixth weekly advance and the longest rally since September 2007. The central bank bought the most foreign currency on the market in almost a year this week as it sought to control the advance, said Mikhail Galkin, head of fixed- income and credit research at Moscowâ€™s MDM Bank.

The ruble has climbed 16 percent since the end of January amid a 39 percent jump in Urals crude, the countryâ€™s chief export blend, and central bank efforts to deter bets against the managed currency. The ruble depreciated 35 percent in the six months to Jan. 31, spurred by Urals crudeâ€™s more than $100 slump from a record high and the worst global financial crisis since the Great Depression.

Bank Rossii, has been buying foreign currency on the market in a bid to limit the rubleâ€™s volatility, the central bankâ€™s First Deputy Chairman Alexei Ulyukayev said in an interview last week.

Deustche Bank last week specifically recommended buying Hungarian forint denominated assets – according to the bank the Russian ruble, the Hungarian forint and the Turkish lira are among the most interesting trades at present. At the start of April Goldman Sachs also recommended investors to take advantage of the unique opportunity and use euros, dollars and yen to buy Mexican pesos, real, rupiah, rand and Russia rubles.

But we need to be careful here. Kudrin is undoubtedly right, Russia does need to dig herself in for a longish winter. There may well be no global ‘V’ shaped recovery, and the Russian economy may well have to learn to cut its coat according to its cloth in order to live with oil at prices below the critical levels for Russian stability. But please, oh please, don’t let’s start fooling ourselves into thinking that applying fiscal and monetary tightening is expansionary!

As for those part of Eastern Europe who are EU members, we need EU Bonds and we need them now. We are all one family, and this policy of sitting back and watching one government after another feeding their voracious contraction by desperately cutting spending is simply shameful – not to mention counterproductive, as one west european company after another readies the lay-off slips, and the banks prepare more bailout applications. Of course we need longer term structural reforms in countries like Hungary. But they will not work miracles in the short term. The condition for expectations and credibility support should be longer term and deep structural reform, not short term budgetary pressure. The kind of support we are seeing now is only a venture in moral hazard, as it underwrites short term financial stability, and thus guarantess short carry trade bets, while locking the government in so tight it will have trouble carrying the population with it over the longer haul. This is why Keynes said that, you know, in the long run we are all dead thing, since we need policies that work in the long run, while in the short run we also need palliatives to make sure there is a long run.

4 thoughts on “The New Orthodoxy Is Upon Us”