Well, it isn’t only my German economy Q4 call, or my Japanese economy one which look OK right now, this Italian one also now seems very much to the point.

In fact, as I suspected it might, the Italian economy went back into contraction mode in the last three months of 2009. 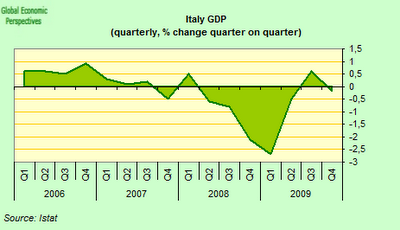 Italy’s GDP shrank by 4.9 percent in the 2009, a result which was slightly worse than than the 4.8 percent contraction the Italian government had predicted. The fourth quarter figure was worse than had been expected by economists who had forecast a 0.1 percent growth, according to a consensus polled by Dow Jones Newswires. Istat blamed the decrease on a fall in the value added by Italian industry. In January, the Italian government revised its economic growth forecast for 2010 upward – from 0.7 percent to 1.1 percent. 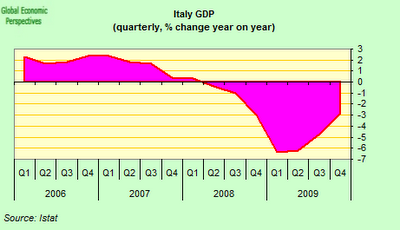 Perhaps the best way of putting the seriousness of Italy’s situation in some kind of perspective is to say that GDP levels are still below those of early 2003. My opinion is that even in the best of cases Italian trend GDP growth is now below 0.5% per annum, and indeed it may well be approaching zero. 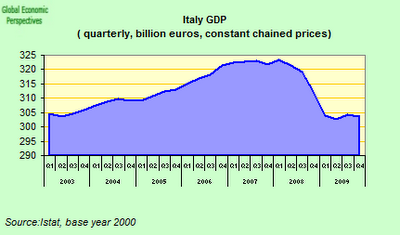 8 thoughts on “The Italian Economy Contracts Again in Q4 2009”