With every passing day Portugal has less and less economy left, while fewer and fewer people remain to try to pay down the debt.

As Portuguese President Aníbal Cavaco Silva once put it, “A country without children is a nation without a future.” He was, of course, referring to his country’s ultra-low birth rate, which is just over 1.3 (Tfr) and has been below replacement level (2.1Tfr) since the early 1980s. In 2012 only just over 90,000 children were born in the country, the lowest number in more than a century – you need to go back to the nineteenth century to find numbers like the ones we have been seeing since the crisis really took hold. 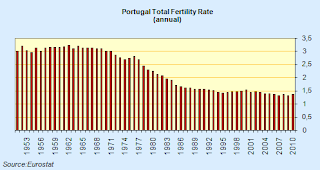 But added to this longstanding, yet unaddressed, problem there is now another, just as dangerous, one. High unemployment levels and the lack of job opportunities are leading an ever increasing number of young Portuguese to emigrate. The numbers are large, possibly a million over the last decade, victims of the country’s ridiculously low growth rate – under 1% a year. And the departures are accelerating. Jose Cesario, secretary of state for emigrant communities, estimated recently that up to 240,000 people may have left since the start of 2011. 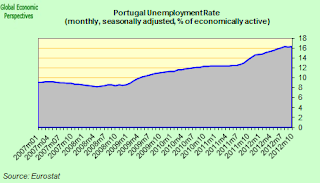 Naturally this is one of the reasons why Portuguese unemployment numbers haven’t hit the Spanish or Greek heights. According to data from the Portuguese Institute of Employment and Professional Training, during the first nine months of last year 24,689 people cancelled their unemployment registration due to a decision to emigrate. This compares with 16,977 in the first nine months of 2011. In September alone, 2,766 people signed off for the same reason, a 49% increase on September of 2011. Yet between January and September Portugal’s EU harmonized unemployment rate rose from 14.7% to 16.3%, suggesting that without so many people packing their bags and leaving the figure would have been significantly higher, and offering some explanation as to why government officials don’t do more to try and stop the flow.

Nobel economist Paul Krugman recently suggested that among the ailments Japan was suffering from was a shortage of Japanese. Or put another way Japan’s slow growth is partly a by-product of the country’s ageing and shrinking workforce. Looking at the country’s population dynamics Portugal certainly looks a likely candidate to catch this most modern of modern diseases. Not only does Portugal have the key ingredient behind the Japanese workforce shrinkage – long term ultra-low fertility – it has some added issues to boot. Japan may be immigration averse, but its inhabitants aren’t fleeing in droves.

Of course, a shortage is always relative to something. Many hold that the planet is overpopulated, and that energy constraints mean fewer people would be better. So shouldn’t we be celebrating all these children who aren’t getting born?
Well, no, at least not if you want sustainable pension and health system, and that is what the developed world sovereign debt crisis is all about, how to meet implicit liabilities for an ever older population. One thing Portugal won’t have a shortage of is old people, since the over 65 age group is projected to grow and grow, even as the working population shrinks and shrinks. No wonder the young are leaving, even if the youth unemployment rate wasn’t 38.3%, just think of all the taxes and social security contributions the remaining young people are going to have to pay just to keep the welfare ship afloat. Patriotism at the end of the day has its limits. 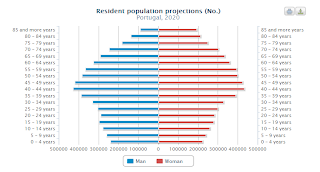 Unfortunately population flight and steadily rising unemployment aren’t the only problems the country is facing. The economy is also tanking, and getting smaller by the day. 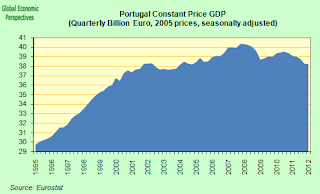 Far from the recession getting milder as last year progressed it actually accelerated, and there was a 3.8% output drop in the three months to December in comparison with a year earlier.
Naturally, it isn’t all bad news. Exports are doing extremely well. They were up by 5.8% during the course of 2012, and the really good news was an increase of almost 20% in shipments outside Europe – exports to countries outside the EU jumped 19.8% to13.1 billion euros. These now constitute nearly 30% of total exports, up from just over 25% in 2011. In contrast exports to other EU countries – where domestic demand is contracting rather than expanding – were up a mere 1%.
In contrast retail sales were down nearly 10% on the year, construction output 15%, and industrial output 5%.

This is a familiar picture across Europe’s southern periphery, where positive export performance does not compensate for shrinking domestic demand due to the smallish size of the export sector, generating a negative environment which ongoing reductions in government spending do nothing to assuage.

And next year it looks set to get worse. The Bank of Portugal is now forecasting a GDP drop of 1.9% in 2013, compared with earlier expectations for a much softer fall. As recently as last October the IMF was expecting only a 1% drop. In any event it will be the third consecutive year of decline, making for five out of the last six years where the Portuguese economy has gone backwards following the best part of a decade where it scarcely moved forwards.

But if there is a shortage of both growth and young people, there is no shortage of debt. Gross government debt as a percentage of GDP hit the 120% of GDP level last year. And it isn’t only public sector debt, the Portuguese private sector owed some 250% of GDP at the end of last year, according to Eurostat records, one of the highest levels in the EU. 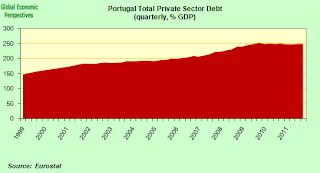 Worse still the country’s net international investment position had a negative balance of nearly 110% of GDP, the worst in the EU. 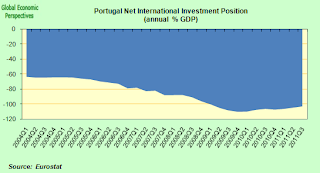 This last detail is important, since according to conventional economic theory it is by drawing down on overseas assets (which have been acquired by pensions and other saving) that elderly societies can help meet their pension and health liabilities (the Japan case). But in Portugal far from reaping returns on this account, paying down these debts, or interest on them, will be a drain on public resources for many years to come.

So with less people working and paying into the welfare system, less GDP, and huge debts the numbers simply don’t add up. This year we will see GDP levels last seen in 2000. Yet in their latest Article IV consultation report the IMF Executive Directors actually “welcomed the [Portuguese] authorities’ impressive policy effort to gradually reverse the accumulated imbalances and prevent future crises”. How they can say this and keep a straight face when talking about a country which is actually travelling backwards in time is hard to understand. It looks increasingly like the Fund is suffering from “integrity flight” and relegating itself to the role of a public relations body for a group of fumbling European politicians.

The depth of ignorance which exists on the challenges the country faces was revealed last year when Prime Minister Pedro Passos Coelho actually said that the best solution to youth unemployment problem was for young people to emigrate. We are increasingly handling the new and complex problems presented by the 21st century with the aid of simplistic formulas derived from 20thcentury textbook economics. It’s time for someone somewhere to wake up to the fact that the old models don’t work, because there are growing number of key factors they simply don’t capture. The poor performance of economists using these models is increasingly getting the profession a bad name among the public at large. Mr Draghi’s outright monetary transactions programme may well be doing a marvelous job of addressing the issue of financial capital flight but it offers few solutions to the human capital one. In the absence of policies which acknowledge these issues exist and then address them none of the sustainability analyses – debt, financial sector, whatever – are worth the paper they have been written on.

I have established a dedicated Facebook page to campaign for the EU to take this issue more seriously, in particular by insisting member states measure the problem more adequately and having Eurostat incorporate population migrations as an indicator in the Macroeconomic Imbalance Procedure Scoreboard in just the same way current account balances are. If you agree with me that this is a significant problem that needs to be given more importance then please take the time to click “like” on the page. I realize it is a tiny initiative in the face of what could become a huge problem, but sometime great things from little seeds to grow.

This is a revised version of an article which originally appeared on the Iberosphere website.

40 thoughts on “The Great Portuguese Hollowing Out”