Two weeks ago I drew attention to a revealing press conference given by IMF First Deputy Managing Director John Lipsky and European Central Bank governing council member Christian Noyer where it seemed a rather different posture was being taken on the Latvian question than that which is being transmitted from Brussels. Then P O’Neill found a message on Twitter which suggested the topic of the Latvian budget had been unexpectedly added to the EcoFin agenda.

Today Bloomberg report that Barclays Capitalâ€™s chief economist for emerging Europe Christian Keller thinks that the IMF’s posture of continuing to withhold funds even after the approval of the spending cuts â€œsignaled that the rift between the IMF and EU has widenedâ€ .

Now I don’t want to see connections were there are none, but it is a coincidence that Christian Keller works for the same Barclays capital whose Head of Emerging Markets Strategy Eduardo Levy-Yeyati recently published a lengthy analysis on the influential Voxeu – entitled Is Latvia the new Argentina? – where he argued that: “The strategy of engineering an â€œinternalâ€ depreciation under a peg in Latvia (via contractionary fiscal policy, wage cuts and price deflation) implicit in the IMF program is proving too painful, if not self-defeating as in the 2001 collapse of Argentinaâ€™s currency board”

Now the publication of this article was interesting since Eduardo Levy-Yayati is not just any old economist. Previous to joining Barclays Capital, as his Voxeu biography informs us, he was

“a Senior Financial Sector Advisor for Latin America & the Caribbean at The World Bank. Previously, a Senior Research Associate at the Inter-American Development Bank, the Director of Monetary and Financial Policies and Chief Economist for the Central Bank of Argentina, and the Director of the Center for Financial Research and Professor of Economics and Finance at Universidad Torcuato Di Tella. He has also worked as consultant for the IMF, the World Bank, the Inter-American Development Bank, the Japan Bank for International Cooperation, among many public and private institutions. His research on emerging markets banking and finance has been published extensively in top international economic journals. “

That is, SeÃ±or Levy-Yayati is an extremely experienced economist, an old Argentina hand, and enjoys some considerable influence over emerging markets issues in Washington. So was the appearance of the article in Voxeu at the end of June totally coincidental? He certainly is experienced enough to know what he is doing in these matters. And was it also a coincidence that only a week later former chief economist at the International Monetary Fund Ken Rogoff – surely another person who knows perfectly well what he is doing – gave an interview where he said that “Latvia should devalue the lats to avoid a worsening of its economic crisis” and that “the IMF made the wrong decision when it allowed Latvia to keep its currency peg”?

The IMF cannot say what it really thinks for obvious reasons, but could we construe Levy-Yayati and Rogoff as thinking out loud on the funds behalf?

The clash between the two institutions (should such a clash exist) derives from â€œideological differencesâ€ according to Keller. “The IMF is focused on economic questions such as the sustainability of the currency peg, the use of economic stimulus or the idea of fast-track euro adoption……The EUâ€™s main concern is political, such as euro-adoption rules and the implementation of convergence programs”.

This all rings pretty true, and it rings even truer when you note that the Latvian Prime Minister Valdis Dombrovskis said only last week that the country “may not need the IMF share of the financing”. As Keller says, â€œThe Latvia program has become a headache for the IMF.â€ 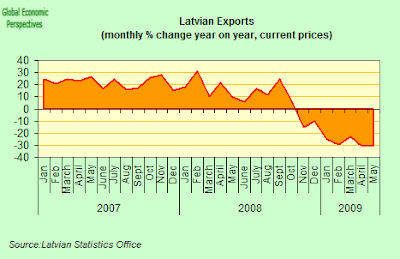 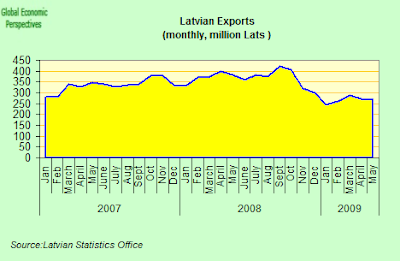 Industrial output fell back again in May over April, by 0.4% on a seasonally adjusted basis according to the statistics office. Year on year it was down 19.3%. 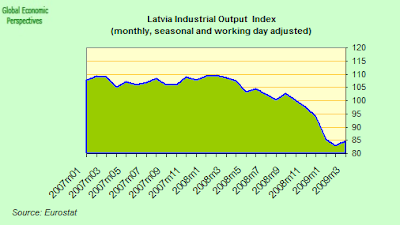 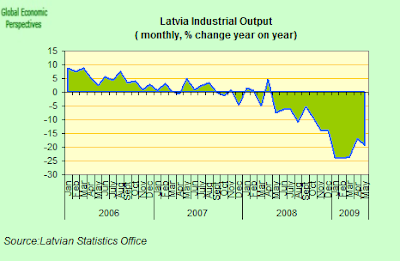 And domestic demand continues to weaken. Retail sales were down 0.48% in May over April, and 24.14% year on year, according to Eurostat data. 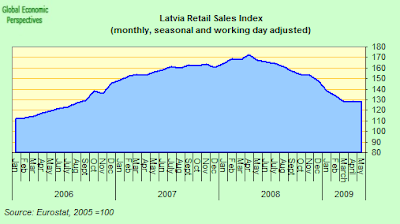 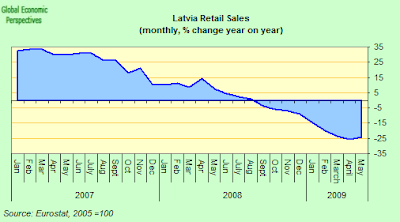 Latviaâ€™s inflation rate fell to 3.4 percent in June, the lowest annual rate since October 2003, from 4.7 percent in May. Prices were down 0.5% on the month, but this is way too slow for the kind of internal devaluation process which is underway. At this rate the loss of GDP will be truly massive before the internal currency correction has taken place.

There were 206,000 people unemployed in Latvia in May, or 16.3 percent of the labour force, according to the latest Eurostat data. This is slightly down on earlier data, but since these results are survey based, and such rapid changes make it difficult to apply such methodologies, I don’t think we need suspect any kind of “foul play”. The rise is dramatic enough as it is, as can be seen in the chart below. This makes me wonder were we will be by mid 2010. 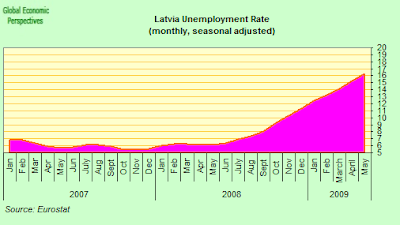 One area where the central bank has had some success has been in getting overnight interbank lending rates down again, and the overnight Rigibor is now back around 3% (13 July), but the 12 month rates are still very high (20.2% 13 July) which does suggest that while market participants are fairly sure the peg is safe in the short term, they are not at all convinced about what is going to happen in the longer term. And in this they seem to be making a valid judgement, since this is the situation at the time of writing. 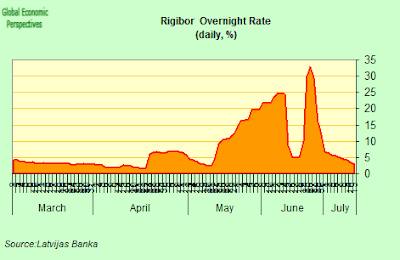 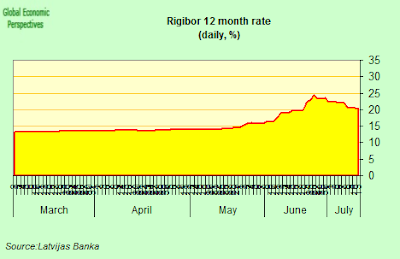 Meatime Latvia’s natality continues to suffer under the weight of the crisis, there were 1750 live births in May, down 15.3% on May 2008. Thus, not only are we playing with the countries short term future here, we are also putting the possibility of having a long term one at risk. 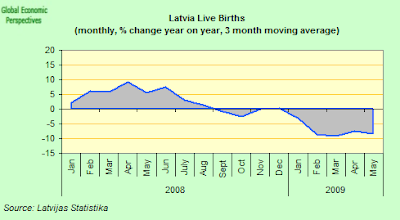 Where Is The Endgame?

When it comes to the short term dynamics of the looming currency crisis in Emerging Europe, one of the Baltic Three, probably Latvia, will most likely be the first to concede its peg, as Eduardo Levy-Yeyati says this is just too painful, and the loss of GDP which is taking place while the politicians are dithering is fearful.

But when Latvia does leave its peg, then others are almost bound to follow. Everything depends on whether the EU Commission and the IMF are proactive or limit themselves to a mere reactive, problem-containment role. If the Latvian currency realignment is done in an organised and systematic fashion, then it may, even at this late date, be a containable process. For this to happen the EU Commission have to stop playing with the politics of the situation, realise that the Maastricht criteria were not written in tablets of stone, and start to formulate a reasonable exit stratgey for all the Eastern members of the EU. They need, that is, to start thinking practical economics, the way the IMF now seem to be doing. The macro economics of this was always clear and straightforward.

But if the Latvian situation is simply left to fester, and the country falls into the grip of a growing political anarchy, then containment will be much more difficult, since panic will more than likely set in.

A similar situation pertains in Bulgaria (see my latest post on Bulgaria, since the similatities are evident). Absent a Latvian devaluation, it is not unthinkable that the Lev peg may be maintained in Bulgaria for another year or so. But if the Bulgarian authorities do go down this road, then we face the severe risk of a a further raggedy ending, since the problem is not one of sustaining the peg, but of restoring competitiveness and economic growth, and this is much more difficult without a formal devaluation. And if Bulgaria does go hurtling off that cliff on which it is currently perched, then just be damn careful it doesn’t drag half of South Eastern Europe careering after it. The EU Commission need to begin to resolve this mess, and the need to begin now!