OK, just for a change let’s start with some math. The increase in a countrys sovereign debt stock to GDP ratio is given by the following formula:

where D is the total debt level, Y is nominal GDP, PD is the primary deficit, i is the average (nominal) interest paid on government debt, y is the nominal GDP growth rate and SF is the stock-flow adjustment.

Now, if like me, you don’t especially love maths, you may want to ask “what the hell does this rigmarole mean?”.

Well, in simple plain English the above equation – which in fact comes from the recent Danske Bank report on EU Sovereign Debt– means that movements in the critical debt to GDP level depend both on the level of the annual fiscal deficit (the primary deficit, on which so much attention is currently focused in the Greek case) and on changes in the ratio between the value of the stock of debt and the value GDP. The key term is the one in brackets, and it is often referred to as the snow-ball
effect on debt – the self-reinforcing effect of debt accumulation (or de-cumulation) arising from the difference between the interest rate paid on public debt and the nominal growth rate of the national economy.

Debt and bad credit are barriers that can prevent you from moving on with your life, with the online debt consolidation you can often combine all those smaller debts into one monthly payment, which gives you less to keep track of and worry about every month.

Nominal here means GDP values before adjustment for inflation (what is known as current price GDP). So what we can say is that the trajectory of (for example) Greek debt to GDP going forward (and thus the effectiveness of the adjustment programme) depends critically on only three main variables – the rate of deflation/inflation, the rate of GDP growth, and the interest spread charged on Greek bonds. Ideally, Greece needs solid GDP growth, inflation, and a low spread on Greek bonds vis-a-vis German ones. The problem is the Greek Stability Programme may achieve none of these.

In the first place, the attempt to reduce the primary deficit will involve withdrawing some 10% of GDP in government demand from the economy in the space of three years (to go from an annual fiscal deficit of 12.7% a year in 2009 to one of 2.8% in 2012). The Greek government plan projects the economy to shrink by 0.3 per cent this year before rebounding with growth of 1.5 per cent in 2011 and 1.9 per cent in 2012. Most analysts are very sceptical about this forecast, since sustaining any kind of GDP growth under the present circumstances will be hard, and I think the most realistic expectation is that the Greek economy will see some sort of annual contraction during each of the three relevant programme years.

Secondly, to keep the debt GDP level from snowballing Greece needs inflation. But to get GDP growth Greeec needs to restore competitiveness, and this means (given they have no currency of their own) price and wage reductions (ie the so called internal devaluation) so they will have deflation not inflation, or they will not “correct” and move towards GDP growth.

Thirdly, and this one is easier: Greece needs to reduce the bond spread to keep interest rates on the debt as low as possible. This is doable, should Greece be able to convince market participants a viable correction plan is being operated. The ECB could also play a role here. But Monsieur Trichet, in his wisdom, said two things which were relevant in the post-monthly-meeting press conference yesterday. In the first place he said, quite correctly “we are here to help” – which I read as meaning that he is saying to the Greek government that “you take the steps you need to take, and we will help with liquidity”, but on the other hand he also said “we will make no exception for individual countries” in setting our collateral rule, which effectively means that (from 1 January 2011) should Greece lose it’s A2 status from Moodys (by two notches), the ECB will not be able to accept Greek bonds.

The first statement clearly offers support to the Greek spread, but the second (which might lead people to think they should start to steadily remove Greek sovereign debt from their portfolio) obviously wasn’t. 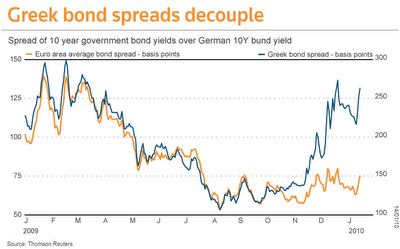 So basically, to make Greek debt to GDP dynamics sustainable, and avoid the snowball effect, my guess is you need two things:

a) to convince investors that Moody’s will not downgrade, or some that some other form of support will be offered to the country.

b) some solution to the restoration of competitiveness dilemma. Basically, at the moment the Greek government has no interest in carrying out an internal devaluation, since the deflation impact on the debt formula would simply precipitate the snowball. But if they don’t carry it out the economy will not return to growth, and investors will lose confidence and the bond spreads widen again, effectively setting off the snowball via another route.

So there needs to be a quid-pro-quo here, where the EU authorities undertake to restructure Greek debt in some way via the use of (eg) EU bonds (the famous bail-out) should Greece comply with a certain number of specified conditions first. Now many will scream at this point, “well they got themselves into this mess, now let them get themselves out of it”. But matters are never that simple. Greek sovereign debt is in part a by-product of the eurosystem experiment, which made the accumulation of such debts at apparently cheap rates of interest possible (although none of those responsible for overseeing the system seem willing to recognise this). The Greek people have to accept their share of responsibility for the mess, and for the behaviour of their elected representatives. But there should be a limit to the “financial penalty” imposed. As Martin Wolf says in the Iceland context:

The final and, in truth, most important question is whether these demands are reasonable. After all, in every civilised country it has long been accepted that there is a limit to the pursuit of any debts. That is why we have introduced limited liability and abolished debtorsâ€™ prisons. Asking a people to transfer as much as 50 per cent of GDP, plus interest, via a sustained current account surplus is extraordinarily onerous.

In fact, asked in a Reuters poll carried out between January 11-14 what they felt was the the probability of Greece actually seeking a bailout this year, the median response from around 30 analysts that they would was 20 percent, with the same likelihood being expressed that it would be necessary at some point in the next five years.

This is not a very high probability at this point, but then when the same sample of analysts was asked about future ratings decisions, some 16 of the 27 analysts involved said they thought Moody’s Ratings Service would downgrade its rating from A2 to a below-A rating by the end of the year. This is a much more significant result.

As it happens, I personally don’t agree with either verdict, since in the first place Moody’s are concerned with long term sustainability, so I doubt they will change their view on that one this year if the Greek government follow an agreed EU programme, while I do think (for the reasons expressed above) that some sort of Greek “bail-out” will be necessary over the next five years (to stop the snowball) if the government does what it has to do.

But all of this only serves to highlight juest how precarious the Greek situation actually is, in particular since the government still haven’t accepted the need for internal devaluation, which is the only policy which will really restore growth. With a majority of analysts thinking Moody’s will move to a below-A rating by the end of the year, and Monsieur Trichet saying that as of 1 January 2011 the ECB will not accept such bonds as collateral for lending, something, somewhere is likely to give, which is why I think the Greek government should at this very moment be throwing itself into the welcoming arms of the IMF before matters reach the point of no return on the spreads and the debt snowball. To do otherwise would be to risk far greater problems in a future which will not be that far away.

18 thoughts on “The Debt Snowball Problem”