The Swiss central bank cut its interest rate close to zero today and started buying foreign currencies to stem the francâ€™s appreciation in the face of a deepening recession and a looming deflation threat (Hat Tip`MacroMan). The result was pretty predictable, the franc plunged the most against the euro since the single currency was introduced, dropping as much as 3.2 percent after the announcement, and hitting 1.5304 per euro at one point. Heady days ahead folks, fasten up your safety belts for what is now bound to be a bumpy ride. Central banking has never been so interesting. 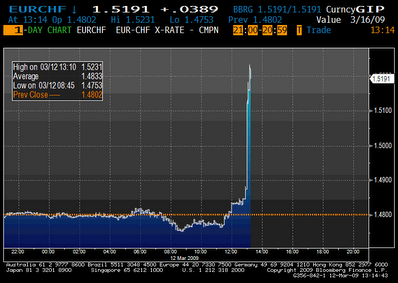 With Switzerlandâ€™s economy set to shrink between 2.5 percent and 3 percent this year, according to SNB forecasts, and prices about to decline by at least 0.5 percent this year (with inflation â€œvery close to zeroâ€ in 2010 and 2011) the bank is obviously very worried about following Japan into the deflation hole, and is determined to at least go down fighting. Dropping your currency violently is one of the best know remedies to fight deflation (see Lars Svensson – various, and now Deputy Governor of the Riksbank – if you have any doubt), that and pumping liquidity hard and fast into the system. But what if the UK, the US, the Eurozone and Japan all want to “ward off deflation” in the same way? Won’t we be back to the 1930s. Exactly. So someone has to play the part of the “big man” here, and take deflation firmly on the cheek. I don’t exactly see the candidates lining themselves up right now, although China is stepping up to the plate at the moment (more out of fear of what would happen if they devalue I think, than out of conviction it is a good policy for them). Will the eurozone be next? Watch Jean Claude Trichet’s after-the-rate-meeting April comments for the next episode in this thrilling story.

The economic situation has deteriorated sharply since last December, and there is a risk of negative inflation over the next three years. Decisive action is thus called for, to forcefully relax monetary conditions. Against this background, the Swiss National Bank (SNB) is making another interest rate cut and acting to prevent any further appreciation of the Swiss franc against the euro. To this end, it will increase liquidity substantially by engaging in additional repo operations, buying Swiss franc bonds issued by private sector borrowers and purchasing foreign currency on the foreign exchange markets. The SNB is lowering the target range for the three-month Libor by 25 basis points, narrowing it to 0â€“0.75%, with immediate effect. It will use all means at its disposal to gradually bring the Libor down to the lower end of the new target range, i.e. to approximately 0.25%. Thus, the Libor now has a narrower target range of 75 basis points, compared with 100 previously.
SNB Statement

It seems over at the Financial Times they broadly agree with the above interpretation, since in an article in today’s edition headed “Swiss action sparks talk of â€˜currency warâ€™” by Peter Garnham you can find the following:

Analysts said the move was likely to increase talk that countries were set to engage in a bout of competitive devaluation.

Countries around the world faced with the constraint of zero interest rate levels might feel it was acceptable to intervene to weaken their currencies in order to ease monetary conditions, he said, adding that other export-dependent economies such as Japan would â€œprobably be at the head of the queueâ€.

â€œMarket intervention by a major central bank such as the SNB opens up the door for other central banks, namely the Bank of Japan, to follow suit,â€ he said. â€œThe yen is widely perceived in Japan to be overvalued.â€