Animated by yesterday’s export driven PMI result, Sweden takes poll position in quantitative easing and commits to keeping 0.25% rates on hold till the end of 2010. Mind you, they are lucky enough to have Princeton economist and avid deflation fighter Lars Svensson in there on the board to steer them through all this. Good for Swedish growth, Krona negative, great for exports. Let’s go, let’s go, let’s go.

Sweden’s central bank cut its key interest rate by 25 basis points to a new record low of 0.25 percent in a surprise move on Thursday, and said it would offer one-year loans to banks to foster lending. The Riksbank said it expected interest rates to remain at that level until late 2010. Deputy Governor Lars Svensson disagreed with the decision and advocated a cut to zero. Nearly all economists in a Reuters poll had expected the Riksbank to keep rates on hold at 0.5 percent, in line with a previous central bank forecast that suggested rates would stay around that level at least until early next year.

“The repo rate is expected to remain at this low level until autumn 2010,” the central bank said in a statement. “The Riksbank’s assessment is that after cutting the repo rate to 0.25 percent it will have reached its lower limit in practice, and that the situation on the financial markets is still not completely normal. “Supplementary measures are necessary to ensure that monetary policy has the intended effect.” Those measures entailed offering 100 billion crowns’ worth of loans to the banks at a fixed interest rate and a maturity of 12 months. “This should contribute to lower funding costs for the banks and lower interest rates for companies and households,” the Riksbank said.

The reaction on the Krona front was swift:

The Swedish krona fell against the euro after the countryâ€™s central bank unexpectedly cut its main interest rate. The krona weakened 0.6 percent to 10.7868 per euro as of 9:32 a.m. in Stockholm. The Swedish currency depreciated 0.9 percent to 7.6527 against the dollar. The Riksbank lowered its main rate by a quarter of a percentage point to 0.25 percent. All but one of 17 economists surveyed by Bloomberg forecast no change.

Some people have been saying in response to warnings that this recovery will be export lead, “exports what exports”? What a load of tripe! Without exports there will be no recovery. The next lesson in abc economics: in times of crisis relative currency values matter more. And to prove it, Swedens PMI just poked into the growth zone, 50.5, following 43.7 last month. The 17% odd devaluation with the euro would have nothing to do with this, would it? Welcome Sweden, the worlds fourth 50+ PMI. 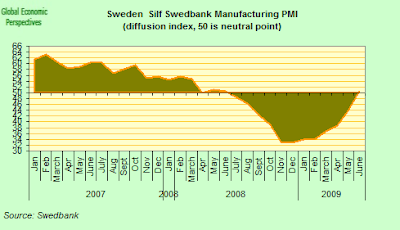 8 thoughts on “State of the Art Monetary Policy In Sweden”