Spanish unemployment shot up again in February to 3.48 million in February, whilst consumer confidence took another knock amidst fears Spain’s jobless would now hit 4 million as early this summer, and maybe 4.5 million, or nearly 20% of the workforce. Right, this the latest in my monthly reports on Spain, but before I go further, a quick joke. How do you know when there is an economic crisis in a country? When everyone around you in the metro is busy reading the economics page in the newspaper.

The latest unemployment data released yestreday (Tuesday) show that the number of unemployment benefit claimants rose by 154,058 in February, down from last months increase of 198,838, but still nearly four times the 40,000 increase in Germany which has almost twice the population, and where the economy is apparently contracting at an even more rapid rate. Could we conclude that one stimulus package is working rather better than the other, at least in preserving employment. 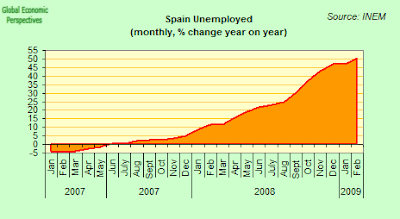 This month’s jump in the jobless number took the Spanish total to its highest since records began in 1996. 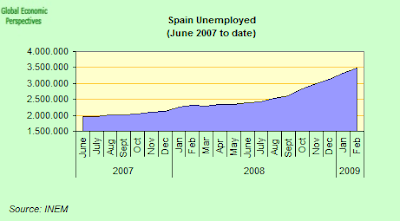 According to Eurostat, Spain’s harmonised unemployment rate rose to 14.8% in January, and has obviously passed the 15% level in February. This is the highest rate anywhere in the EU, and makes it hard to makes sense of all those rapid response comments which shot from the hip against Central Bank Governor Fernandez OrdoÃ±ez’s suggestion that Spain needs urgent labour market reform. Frankly such an Ostrich mentality makes Spain look simply ridiculous, and will make it very hard to ask for the much needed aid in fighting the crisis from the rest of the European Union. 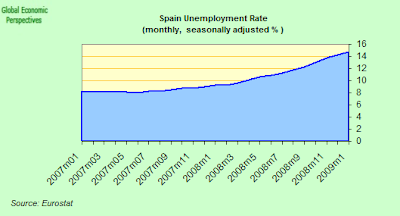 Employment, measured in terms of full-time equivalent job posts, decreased 3.1% in the fourth quarter of 2008, that is, 2.2 points below that from the previous quarter. This result indicated a decrease of almost 602 thousand net full-time job posts in a year. As with the previous quarter, the services branches were the only branches that, on an aggregated level, generated an increase of employment in the economy (almost 140 thousand). 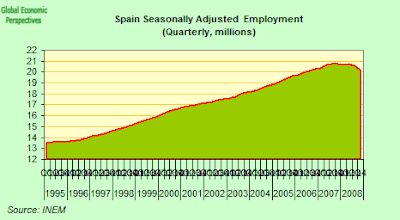 The data is simply piling pressure on more pressure for Prime Minister Zapatero to come out of his bunker and begin to urgently look for economic substitutes to the credit-fuelled construction and consumer spending boom which drove Spain’s recent 15 year growth “miracle”. It is clear that the measures introduced to date simply aren’t working, nor were they ever goping to.

We are seeing stimulus measure after stimulus measure, but all these projects seem to be doing is retaining labour in the construction sector (labour which needs to be shed) while the factories close, and the service sector steadily shrinks. Perhaps the latest piece of depressing data on the stimulus front was the news that car sales in Spain fell by 49 percent in February compared with February 2008.

Contsruction activity has now been falling in Spain since the start of 2007.

On a quarterly basis we can see that the rate of decrease is increasing, from 4.6% in Q3 to 8.0% in Q4 2008. Also construction activity is now begining to fall back as a percentage of GDP. although the rate of decline is still comparatively slow, since GDP itself is falling. As we cab see from the chart below, simply to return to normality we need to get back to around 5% or 6% of GDP, but given the large housing surplus that now exists in Spain it would not be surprising if activity fell to significantly belwo this level, and remained there for a number of years. 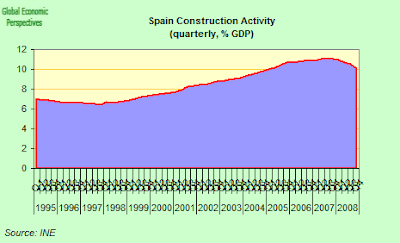 “Although the headline PMI ticked up again in February, operating conditions remained extremely tough. It is still too early to start talking of a recovery in the Spanish manufacturing sector,” said Markit economist Andrew Harker.

Over half of those surveyed reported lower orders in February due to falling demand and noted particularly sharp declines in demand from abroad, especially Europe. Both output and input prices slipped to record lows as the economic environment deteriorated, with raw material prices easing and producers cutting prices to stimulate demand.

“The series record falls in both input prices and output charges signal that deflationary pressures are set to intensify, with consumer price deflation possible in the near future,” said Harker. 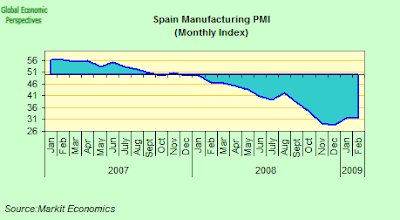 Perhaps the long and steady decline in Spain’s industrial sector is clearest in the output index chart (below). 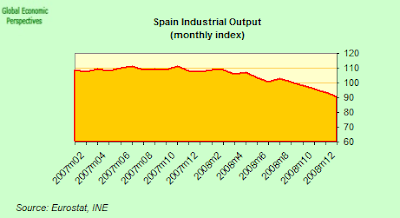 Spanish service sector activity fell steeply in February, prompting the deepest jobs cuts on record and deepening pessimism over how long the country’s recession will last, PMI survey data showed. The pace of decline among firms fell to 31.7, way below the 50 level where growth starts, compared with 31.8 in January and a series low 28.2 in November, according to the Markit Economics Purchasing Managers’ Index published on Wednesday. 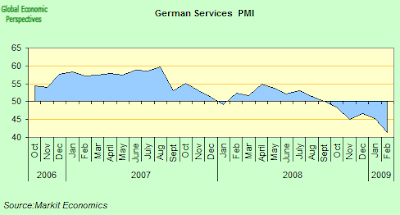 Spanish mortgage lending fell rapidly again in January, with loans to housebuyers running at almost half the level of January 2007, according to Bank of Spain data.4.24 billion euros were lent in new mortgages during the month, the lowest level of mortgage lending since the financial crisis began, and a drop of 49 percent from January 2008. The figure revealed a marked decline in borrowing by Spanish families, following a 42.7 percent drop in December. Over 2008 as a whole, the value of mortgage loans to families fell by 40 percent. The Bank of Spain also reported this week that the volume of consumer credit fell 36 percent year-on-year to 2.45 billion euros in January. In fact lending to households fell 4.3 billion euros between November and December (see chart below) only the second time that this has happened in the course of this crisis. 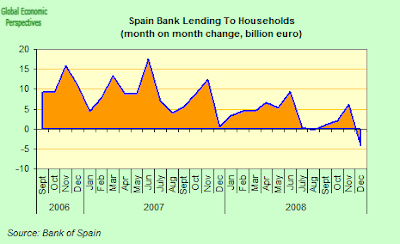 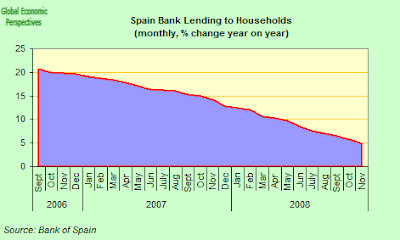 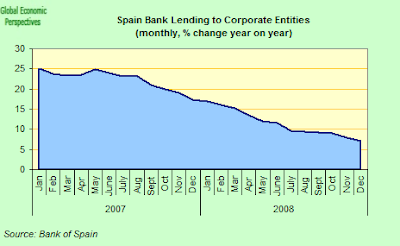 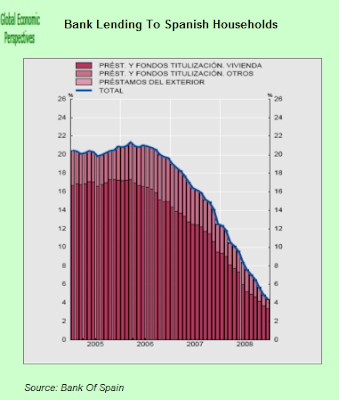 Spain’s trade deficit fell 29.5 percent in December to 6.93 billion euros but the main factor responsible was the very strong fall in imports, which were down by 16.5 percent from December 2007, while exports fell by 7.4 percent, according to the Spanish Industry Ministry. The steep fall in Spain’s trade deficit has reduced negative contribution to gross domestic product coming from external trade, and this means that GDP, which fell by 1 percent in quarterly terms in the fourth quarter of 2008, is not contracting as fast as indicators of domestic demand, such as retail sales, would imply. A big contribution to the smaller deficit came from lower oil prices, which helped to reduce energy imports by 19 percent. Capital goods imports fell sharply (by 18 percent), while imports of manufactured consumer goods, on the other hand, were up by 7.5 percent. This is not good news, since it indicates the fundamental lack of competitiveness of Spanish industry, for a recovery to occur the relation would have to be the other one, with capital goods rising, and manufactured imports falling.

Spain’s trade deficit is the main contributor to Spain’s current account deficit which was still running at about 10 percent of GDP over the year as a whole. This deficit has been funded by credit from abroad, a factor which is heavily responsible for the the large accumulation of private sector debt which now weighs so heavily on the Spanish economy. 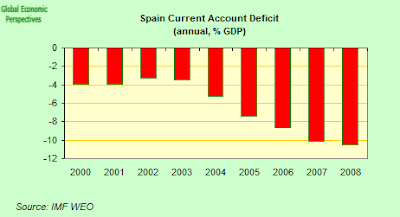 While The Fiscal Deficit Grows

Spain recently reported a higher-than-anticipated deficit of 3.8 percent of GDP for 2008, but the government committed itself to bringing the shortfall back close to the European ceiling of 3 percent by 2011. Spain’s Economy Ministry had forecast a deficit equal to 3.4 percent of gross domestic product (GDP) in 2008 following a record 2.2 percent surplus in 2007 that was the second largest in the euro zone. The government currently expected the deficit to peak at 5.8 percent of GDP this year, but most observes consider this a highly optimistic forecast, especially since the economy is almost certainly going to contract more than the current government estimate of a 1.6 percent contraction (on which the budget is based).

The European Commission also remains unconvinced, and has initiated an excess deficit procedure, as indicated below:

Spain is undergoing a sharp contraction of economic activity as a result of the global economic and financial crisis and a severe correction in the housing sector, both taking their toll on public finances and on employment. Since the first half of 2008, the Spanish authorities have also adopted various discretionary measures to stimulate economic activity, in line with the EU Recovery Plan, including tax cuts and investment projects, amounting to 2Â¼% of GDP in 2009, as well as a series of structural reforms.

In 2008, for the first time in several years, Spain is estimated by the Commission and in its Stability Programme sent mid January to have recorded a budget deficit estimated at 3.4% of GDP. The programme puts the figure this year at -5.8% before a gradual fall to below 4% in 2011. However, the favourable macroeconomic assumptions may imply a lower contribution of economic growth to fiscal consolidation than envisaged and the adjustment path is not fully backed up with concrete measures, except for the discontinuation of the 2009 stimulus package. In this context, a careful assessment of the budgetary impact of discretionary measures will be crucial to ensure the improvement of the medium-term budgetary position, as well as of the long-term sustainability of public finances.

Based on this evaluation, the Commission proposes three policy invitations for Spain, which focus on: (i) Implement the measures in line with the EERP as planned, while avoiding a further deterioration of public finances in 2009, and carry out with determination the planned structural adjustment in 2010 and beyond, backing it up with measures, and strengthening the pace of budgetary consolidation if cyclical conditions are better than projected, (ii)

In view of the ongoing fiscal deterioration and of the projected impact of ageing on government expenditure, iImprove the long-term sustainability of public finances by implementing the adopted measures aimed at curbing the increase in age-related expenditure; (iii) Ensure that fiscal consolidation measures are also geared towards enhancing the quality of the public finances as planned in the light of the needed adjustment of the economy to address existing imbalances.

In parallel with its assessment of the programme, the Commission is adopting a report under Article 104.3 of the Treaty â€“ on the basis of the breach of the 3% of GDP reference value in 2008. While the deficit remained close to the 3% reference value, the deficit cannot be said to be the result of a severe economic downturn as GDP growth was still positive (over 1%). The excess over the 3% is also not temporary as, according to the programme, it will remain above that level until 2011.

Meanwhile, Spain’s Instituto de CrÃ©dito Oficial (ICO) reported this week that consumer confidence declined in February after showing some slight recent improvement. The ICO consumer sentiment indicator dropped to 48.6 in February from 50.1 in January and 76.8 recorded in February 2008. The decline in the headline index was mainly due to a fall in the sub index for current economic conditions, which dropped to 26.3 in February from 29.1 in January. The index is now starting to hover dangerously near the July’s historic low. 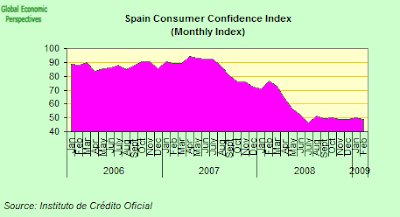 As can be seen from the chart for the sub-components, the only factor holding the whole index up at the moment is the expectations component, when that shoe falls the index could well see another sharp drop. 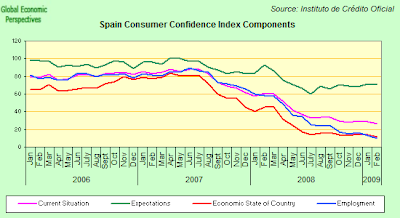 The consequence of all the rising unemployment and declining confidence is obvious, retail sales have entered a long and sustained decline. 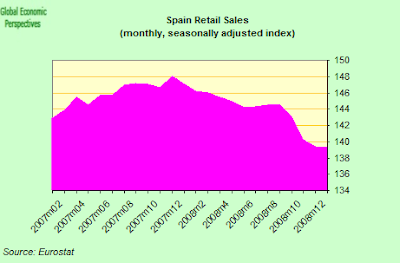 “The valuation levels of the domestic banks do not appropriately reflect the
credit risk embedded in these businesses and we remain cautious on these,”
Goldman said in a note to clients.

Goldman cut its price targets on several Spanish banks, saying that the capacity to withstand credit losses would be a key differentiator among the banks. Goldman said they considered Banco Santander and BBVA to be the best in this respect, while Banco De Sabadell, Banco Popular Espanol and Banco Pastor all seemed weaker.

Finally to close with the news my fellow passengers were all so busy reading this morning on their way to work, Spain’s second largest bank BBVA have forecast that the Spanish economy will shrink by 2.8 percent in 2009 and 0.3 percent in 2010, and that unemployment will rise to 19.7 percent. That is still below my expectation for a 5 percent contraction, but it is significantly below the government forecast of a 1.6 percent contraction this year and 1.2 percent growth (can anyone seriously believe this?) and 15.7 percent unemployment in 2010.