The number of unemployed in Spain was up again in March – by “only” 123,543. I say “only” since it is evidently less than the 154,508 increase registered in February, or the 198,538 registered in January. And indeed many of the newspaper stories have been full of arguments from Employment Minister Maravillas Rojo (would that she could work “Maravillas”) about how Spain registered the weakest unemployment gain in six months in March (when compared to the previous month). However, as those who look into the economic analysis side of this a bit more (and who don’t believe in either wonders or “miracles) point out, taking seasonal factors into account the monthly 3.55% rise in March shows a more or less steady trend, and no special sign of improvement, despite the large stimulus programme. Last March, for example, unemployment fell by 0.62%. 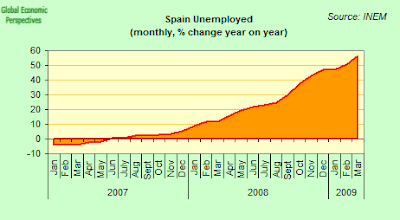 So the overall jobless total rose to 3,605,402 the highest since 1996, and the 3.5 percent or 123,543 March increase was the highest number since 1996 when the current method of calculation was introduced, according to the ministry statement. This was the 12th straight monthly increase and the sixth consecutive montly rise of more than 100,000 registered unemployed in Spain.

Which brings us to the forecast. Basically we could now take two scenarios, a moderate and a worse case one. On the moderate scenario, total unemployment will now hit 4.5 million by December, and 6 million by December 2010. On the worst case scenario we will already be at 5 million by christmas, and be pushing 7 million by the end of 2010. It all depends.

In terms of unemployment rate, the latest quarterly estimate we have from the national statistics agency (INE) was 13.9 percent for the fourth quarter of 2008. However according to European Union statistics agency Eurostat, Spain’s unemployment rate rose to 15.5 percent in February, the highest level in the whole 27-nation bloc. (The EU average was 7.9 percent). Spain’s unemployment rate has now risen each quarter since it dipped to 7.95 percent in the second quarter of 2007, its lowest level since 1978. The government currently expects unemployment to rise to 15.9 percent by the end of the year, but this is obviously hopelessly unrealistic, since we are nearly at that level now, and even the European Commission, which is normally fairly conservative with downside estimates, is more pessimistic, since it forecasts Spain’s jobless rate continuing to rise in Spain to 16.1 percent in 2010 and 18.7 percent in 2011.

My own forcasts would be on the moderate forecast around 20% by the end of 2009 and 25% by end 2010, and on the worst case scenario possibly 22% by the end of this year, and 27% to 30% by the end of 2010. These latter numbers look horrific, and seem hard to believe, but we are currently set on a path (especially now with the “breakages” in the banking system – today there is growing and informed specultion here in Catalonia that Caixa Penedes, and Caixa Catalunya may be the next to go) where it is hard to see how we won’t get to that horrible place if no one does anything. And since at this moment the entire European leadership seems to be in denial that there is any special problem in Spain nothing looks likely to be done. (Jean Claude Trichet simply said what he had to to the Spanish journalist who questioned him on the Spanish banking system in yesterdays press conference – “I have every confidence in the strength of the Spanish banking system). Even that G20 meeting that is hitting the headlines seems to have had little to offer for countries like Spain, there were plenty of ideas about how to avoid falling into another bubble situation in – say – 2020, but virtually none about how to drag us out of the one we are currently stuck in. 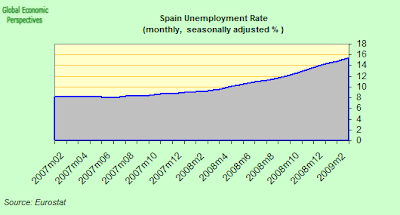 Why? Because Spanish consumer confidence rose again this month, to 53.7 points, up from 48.6 points in February, The Confidence Index which is provided by Spain’s Official Credit Institute (ICO ) was at 73.1 in March last year, hit a record low of 46.3 in July as oil prices soared and European Central Bank interest rates hit 4.25 percent, and has since oscillated around the 50 point level amid easing commodity prices and following ECB decisions to sharply reduce interets rates. 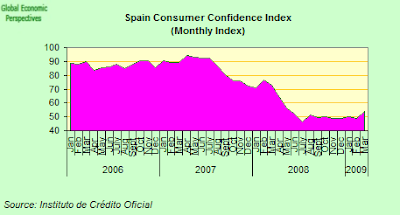 But if we look at the breakdown in the individual components, we will see that the current conditions, employment and state of the country readings have long been trawling the bottom. The only component which gas really not hit lows (yet) is the expectations one. The Spanish are ever optimistic (until they get really pessimistic that is) and this component has been rising in recent months, even as conditions have continued to deteriorate. Which is why I say they must believe something like the “earthquake” theory of probability, the more days that pass with things getting worse must mean that tomorrow they are likely to get better, right? 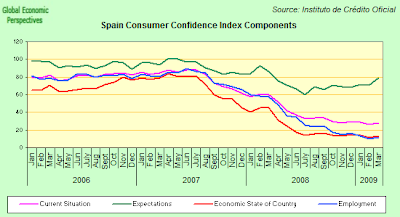 The JPMorgan Global Manufacturing PMI â€“ which provides a single figure snapshot of operating conditions across the planet â€“ was out earlier this week and posted 37.2 in March. Although substantially below the no-change mark of 50.0, the PMI was up for the third month in row and at its highest level since last October. The vast majority of the national manufacturing PMIs rose in March, including the US, Russia, Japan, China, most Eurozone nations and the UK.

This is however the most sustained period of contraction in the series history, and it still remains very unclear where we go from here. In general the drop in output reflects weak demand, with new orders declining for the twelfth month in a row. The trouble is, it is not at all clear where the rebound in demand that is needed for a recovery is actually going to come from.

The Markit Eurozone Final Manufacturing PMI for March rose from February’s all-time low, up to 33.9 from 33.5. Thus the PMI signalled a marginal easing in the rate of decline from the previous month’s record pace. Output showed the weakest decline for five months, and a smaller fall than the Flash estimate, although the rate of decline remained well above that seen prior to last October. With the exception of Italy, Austria and Greece, rates of contraction eased in each of the eight countries surveyed.

The Netherlands saw the smallest (though still steep) drop in production, while Spain saw the sharpest decline for the eleventh straight month. By product, investment goods producers reported the steepest fall in production for the third successive month, closely followed by intermediate goods producers. Consumer goods firms meanwhile reported the weakest rate of decline for the seventh consecutive month. Stocks of both raw materials and finished goods fell at record rates, as companies focused on lowering their operating capacity and controlling costs. The reduction in unsold goods stock was especially steep in Ireland, Germany and France.

The pace of decline in Spanish manufacturing slowed in March but remained at the steepest contraction rate of any eurozone country. The PMI rose in March to 32.9 from 31.8 in February and thus further off from December’s record low of 28.5. All the survey’s main indicators remain far below the 50 level that divides growth from contraction. Output and new orders continued to contract sharply in March but at slower rates than recorded in the last six months, with panellists blaming falling demand as the principal cause as clients cut back on spending.

“The March PMI data suggests that the pace of decline in the Spanish manufacturing sector has slowed,” said economist Andrew Harker at Markit Economics, adding that new orders and output indices are well above record lows posted late last year.

But Harker was at pains to stress that the March figures should not be interpreted as any sort of sign of a turnaround in the Spanish economy. Unemployment in the sector continued to rise in line with falling output requirements as joblessness in the wider Spanish economy stood at 15 percent, the highest rate in the European Union. More than 34 percent of those surveyed by Markit said they had noted reduced employment levels at the end of the first quarter. Staffing levels have shrunken continuously since September 2007, according to the survey.

Slumping demand also hit input and output costs, which both dropped to series lows in March. Input costs fell as firms negotiated better prices from suppliers, while output prices fell as these savings were passed on to customers and as scarce business fuelled greater pricing competition.

Spain’s preliminary harmonised inflation fell to -0.1 percent in March, according to government data on Monday, the first negative result for over 45 years as the deepening recession weighed on price gains. 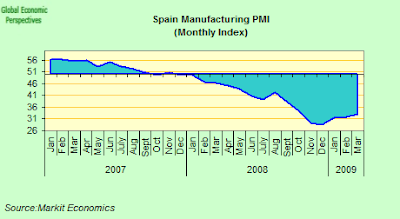