Spain’s statistics office continue to issue worryingly confusing press releases. The latest example is one published in connection with the quarterly labour force survey which came out last Friday.

Now the data the INE assemble in their report is very interesting, and as many observe, the complete survey gives far more reliable data about the state of the labour market than the monthly labour office signings do.

But the way they present the data isn’t interesting, in fact its downright misleading. In particular they chose not to seasonally adjust the data – which in a seasonally driven economy like the Spanish one with significant ups and downs in tourist activity doesn’t make much sense – and this omission is not only lazy, it is negligent. As I say, it is misleading, in the same way the information on VAT returns and deficit reduction progress issued by the Ministerio de EconomÃ­a y Hacienda is misleading (they do not, for example, clarifying the changed VAT refunds procedure), or in the same way the notarial contracts data gives a completely topsy turvy view of movements in Spanish house prices. At best such data gives completely meaningless information, and at worst it leads reporters who cover the Spanish economy hopelessly astray.

“Spain’s unemployment rate fell to 19.79 percent in the third quarter, the first drop since the second quarter of 2007, the National Statistics Institute said on Friday”.

In fact Spain’s seasonally adjusted unemployment (and this is the relevant number, as explained to everyone who ever attended a class in Econ 101) did not fall to 19.79 at the end of the third quarter (ie by September), but rose from 20.5% in August to 20.8% in September, the highest rate in the European Union, and probably in the developed world (you can check the complete Eurostat report on the September Labour Force Survey results here – the numbers are provided by the INE, even if they do not see fit to publish them in their own report). 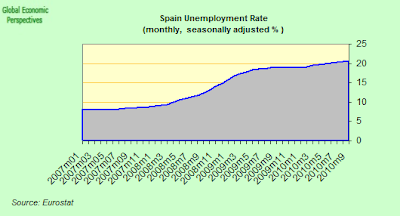 And in fact, far from creating jobs during the quarter, and as can be seen in the Ministry’s own data if you look hard enough, seasonally adjusted the economy lost 30,000 jobs, and the number of unemployed grew by 65,000 (the apparent discrepancy between these two numbers is accounted for by movements in the size of the economically active population).

Even more importantly, and as reported by the Spanish website Cotizalia, of the 92,900 increase in salaried employment reported in the unadjusted data, 90,300 jobs were supplied by the public sector (and this during a deficit reduction exercise where staff contracts are in principal frozen), and only 2,600 came from the private sector. 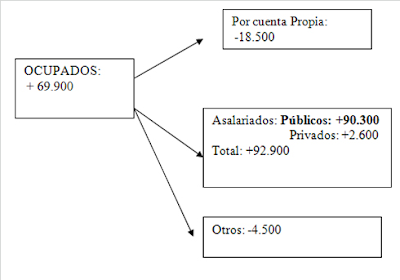 Indeed, when we take into account the seasonal increase in tourist related employment during the summer, underlying employment in the private sector evidently shrank significantly, as suggested by the fact that (on an unadjusted basis) Spanish industry employed 18,300 people less at the end of the quarter than it did in June, and this is the sector which has to lead – through exports – the Spanish recovery. 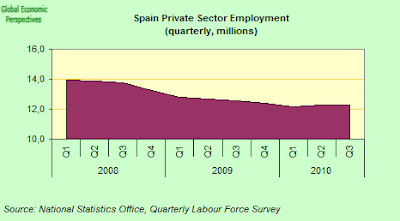 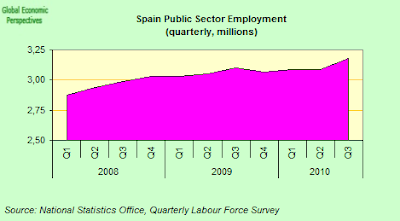 Now let’s go back for a minute to something Monsieur Trichet said in a recent speech on Euro Area statistics. Reliability, clarity and ease of interpretation have to be key cornerstones of national statistics office policy. As he says:

“First, the reliability of the general government statistics underlying the Excessive Deficit Procedure and the Stability and Growth Pact must be guaranteed when they come out. While the government finance statistics of the overwhelming majority of the Member States is reliable, this does not yet apply to all of them. Yet as we are in a highly integrated union, we need reliable statistics not just from the majority of Member States we need it from each and everyone, no matter how large or how small the country is. We have seen that the potential for loss of credibility affects the entire union.”

“we must have full assurance that the statistical indicators supporting enhanced macroeconomic surveillance are robust and timely available. We must have assurance that indicators â€“ such as international indebtedness, unit labour costs and other indicators of competitiveness â€“ are firmly based on accepted statistical methodologies, ideally already legislated, and that the degree of estimation in compiling them is limited”.

Essentially, the point I am making here is not that Spanish statistics are simply “falsified” in the way many argue that Greek ones are, but that insufficient effort is put into producing high quality and reliable data which helps investors, analysts and policy makers to measure what is going on, and take the appropriate decisions. Economic statistic production is not a game where you attempt to fool as many people as you can as often as you can. Nor is good statistical work a question of simply mechanically churning out reports to comply with legal requirements, without consideration of what use the end product will be – the INE’s monthly retail sales and industrial output reports come into this category, since without seasonal adjustment (which again they do not publish even though again they provide the relevant corrected numbers to Eurostat) it is impossible to tell what is happening on a month by month basis. Indeed one cannot escape getting the impression that, when we are talking about Spanish statistics, where the opportunity arises to send journalists heading off on an informational wild goose chase, this opportunity is rarely missed.

Data needs to be credible, informative, and helpful to outsiders who wish to evaluate, and take decisions. As Monsieur Trichet says, if this is not the case, the consequences can affect all members of the monetary union. Unfortunately, all too often, Spanish statistical presentations fall woefully short of these required standards.

Those wishing to read the original INE press release on the Q3 employment data, and see for themselves just how uncritically that drop in unemployment to 19.79% was reported, can find it here. Enjoy the read.