Spain’s economy is now most evidently, and totally and completely officially, in its first recession since 1993. The final confirmation of this came yesterday when the Bank of Spain released its quarterly report on the Spanish economy. According to the bank, gross domestic product fell by 1.1% in the final quarter of 2008 (over the previous quarter), following a 0.2% decline in the third quarter. GDP fell year on year by 0.8%.

Basically the report confirms my analysis in this post which suggested that while technically speaking the recession started on 1 July 2008, the contraction really started in July/August 2007, and it should have been really obvious to everyone by September of that year that the party was well and truly over.

According to the Bank of Spain the main component driving the contraction in the second half of last year was household consumption, with the contraction in household expenditure accelerating in Q4 when compared with Q3. In particular, household consumption fell at a year-on-year rate of something over 1.5% in 2008 Q4, which meant that – taking the year as a whole – it was private consumption which contributed the most to the slowdown in GDP, to a greater degree even than the decline in residential investment (which was nonethelessdown 10% over the year).

The slide in corporate investment also intensified in Q4, in large part as a result of the worsening economic outlook, the sluggishness of demand and the increasing uncertainty, all of this against a backdrop of financing conditions which were completely unfavourable to new business projects. As a result investment in equipment fell off markedly, by more than 7% year-on-year.

As a result of the recessionary environment, employment dropped by 0.5% in 2008 (which compares with an increase of 3.1% in 2007) and the unemployment rate climbed to an 11.3% average for the year as a whole (13.9% in Q4), according to the Labour Force Survey figures.

Inflation slowed dramatically inthe last quarter of the year, with the CPI rising at a 4.1% for the year as a whole (up from the 2.8% average in 2007), although in the second half of the year it fell significantly, hitting a years low of 1.4% in December, the lowest figure since 1998. Indeed the HICP differential with the eurozone average ended the year negative on a negative footing (-0.1%) â€“ the first time this has happened since the start of EMU. My guess is that we may well see a spike in inflation in January – due to the foolish increases in administered prices – after which we should steadily head deeper and deeper into price deflation territory.

The drop in household consumption and fixed capital investment was also to some extent offset by a surge in government spending. The government sector sustained aggregated domestic consumption in 2008, with government consumption increasing at a 5% rate over the year a whole. As a result public finances deteriorated rapidly, and moved from a surplus of 2.2% of GDP in 2007, to a deficit of approximately 3.4% of GDP in 2008. The public debt ratio was up by 3.3% in 2008 and reached 39.5% of GDP. For 2009, the government now envisages a further increase in the deficit – at the moment estimated at 6% of GDP – although since this estimate is based on a forecast contraction of only 1.9% of GDP over the year and this is likely to be a strong underestimate (see below), the deficit could be 7% or 8%, even if there are no additional funds which need to be spent on the bank bailout (unlikely to be realistic, since more money than currently budgeted for may well be needed, as we are seeing in one country after another). If we get price deflation to boot, and thus a reduction in nominal GDP, then debt to GDP could easily be up by a full 10 percentage points in 2009. 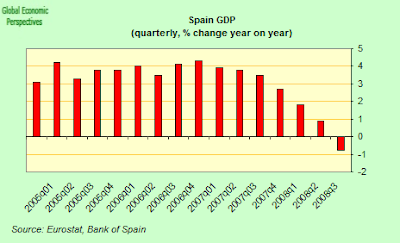 So what about the rate of contraction? Well at the present time, as I indicate above, the Spanish economy is contracting at an annual rate of 4.4%. Now, if we look at the manufacturing PMI (see below), we can see that this coincides with a monthly average reading of around 30 on the index over the quarter. So we could say that a reading of 30 means a contraction of about 5% a year (to begin to calibrate for the future) but this is probably an underestimate, since we have seen a sharp increase in government spending (which is not sustainable at this pace, or better put, we may sustain the present levels, but we simply can’t keep increasing by 5% a year, so the impact of government spending will start to wane) plus we have seen, as mentioned above, a significant positive impact from the trade balance – estimated to have been of the order of 1.7 percentage points in Q4 (in other words without this favourable movement in nthe balance the contraction rate would have been much larger).

So really, without these two factors – the imports slowdown and the increase in government spending – we could easily have been talking about a contraction at an annual rate of 7% plus, which is, well, very, very large. But this is what a 30 manufacturing PMI reading might mean as we go forward, so we had just better hope that the index starts to tick up, hadn’t we. The next results (for January) are out next week. Watch this space. 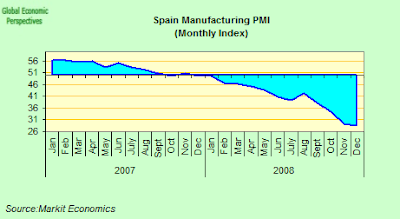