Well here’s the first BIG news of the day – Spain’s Manufacturing contraction accelerates in September. Of course, how could it be otherwise. But I do wish all those people who are still in denial on what is now an all too evident reality would finally come out of the woodwork and do something. If Spain really goes down, it will drag the rest of the Eurozone with it, like Moby Dick, taking Ahab Trichet and his crew careering down to the murky bottom with him. Brussels, Frankfurt, you need to react. Zapatero has to go, and he has to go now. Spain needs a set of rational policies to deal with the crisis, before things really get out of hand. 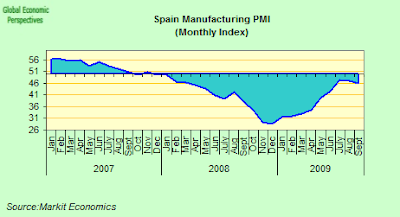 September data pointed to another deterioration of operating conditions in the Spanish manufacturing sector. Both output and employment fell at faster rates, while new business decreased for the first time in three months. The seasonally adjusted Markit Purchasing Managersâ€™ IndexÂ® (PMIÂ®) â€“ a composite indicator designed to measure the performance of the manufacturing economy â€“ dropped to 45.8 in September, representing a marked deterioration of business conditions. Moreover, the pace of decline accelerated to the fastest since June. Output contracted solidly in September, and at a sharper rate than in the previous month as demand in the sector decreased. Production has now fallen in nineteen of the past twenty months.

Falling demand was also a key factor in the twenty-fifth consecutive fall in employment as firms adjusted their staffing levels accordingly. Moreover, the rate of job cuts accelerated to its fastest since June. The lack of demand within the sector led to a further shortening of supplier lead times as pressures on vendors continued to ease.

â€œThe latest Spanish manufacturing PMI data make sorry reading as the sector took a turn for the worse. With firms unable to pass on rising raw material costs to clients due to a lack of demand, manufacturersâ€™ profit margins are likely to come under increased pressure in the coming months. The labour market shows little sign of recovery as firms continue to cut jobs at a sharp pace.â€

Spain is now suffering from an acute deficiency in internal demand. The latest retail sales figures (July) continue to confirm the ongoing decline, with sales down 1.2% month on month over June, and 6.47% over July 2008. Sales are now down 10.11% over their November 2007 peak. Spanish construction fell again between May and June, despite the omnipresent plan E, falling 0.2% on the month. Year on year figures are now virtually meaningless for an industry which had been contracting for three years as of last July, but from the peak activity is now down by around 30 – that is it is the industry is now roughly 70% of what it used to be, and there is still a lot further to go. Industrial output continued to fall in July, and was down 17.4% year on year, which means it has now fallen nearly 35% % from the June 2007 peak.

With the collapse in internal demand Spain’s government has been compelled to come in to support the economy. Such intervention is entirely justified, since without it Spanish living standards would be falling dramatically, but behind the spending there should be a plan, and this is really what is missing in the Spanish case. Spain’s economy has become demand deficient because all the main groups of domestic economic agents are steadily trying to cut back on spending and debt, and the export oriented sector, after years of neglect and internal price inflation, is now just not competitive enough to make up for the gap. Worse, given this, investors are not exactly queueing up to put money into new export capacity, which would be about the only other source of growth the Spanish could look for at this point.

The Unemployment Just Climbs And Climbs

Spain’s unemployment hit 18.9% in August – the highest in the whole EU – according to the latest Eurostat data. According to Eurostat there were 4.348 million unemployed in Spain in August. This means the country should pass the 20% on the wy up around November, and of course it will simply keep on heading up and up until someone finally does something. I guess we could pass 5 million around February perhaps, if there aren’t any accidents on the way, that is. 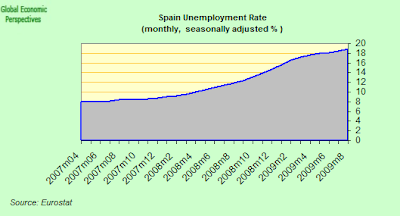 Decision making in modern Europe stands on two legs. On the one hand, as far as fiscal decisions go we have the European Commission whose powers are shortly due to be extended by the all important Lisbon Treaty. Even this rather modest step forward, however, remains bogged down in dispute. On the other hand when it comes to monetary policy the powers of the central bank (the ECB) are severely restrained (at least in theory) by the terms of the Maastricht Treaty which as well as creating the bank also established the EU itself as a legal entity. The present Spanish government is – like all EU governments – being given a wide margin of manoeuvre in how it handles the crisis by both the long suffering EU Commission and by the ECB – there is scarcely an option given the degree of sovereignty the member states still retain – but this degree of tolerance cannot last for ever, and the present increase in the Spanish debt will surely not be allowed to survive unchecked into 2010 and beyond. So push is steadily coming to shove. Yet meanwhile, from their ivory Towers in Brussels and Frankfurt those who are really responsible for Europe’s decision taking are relegated to the frustrating position of being mere spectators, forced to come in after the horse has bolted and extinguish the fire but without real access to the direct policy levers which would have enabled them to put the blaze out before it got out of hand. Would somebody please like to do something here, before we pass the point of no return. Hello-o, anyone there?