According to Spain’s Instituto de CrÃ©dito Oficial (ICO) the ICC-ICO (consumer confidence index) went up in January by 6.1 points from its December value and is now at its highest level since August 2009. This confidence improvement is largely due to a significant rise in the Expectations Indicator (+5.7 points) and to a smaller one in the Current Economic Conditions one (+2.3 points).

As can be seen from the chart below, confidence while up, is not exceptional by historic standards, which is hardly surprising given the deep recession which Spain is in. 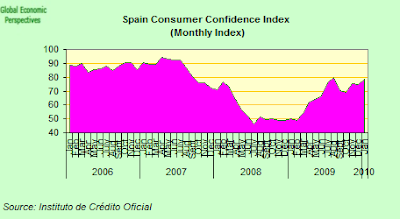 What is really striking – nay astonishing – is that when you come to look at the breakdown of the index into its components (see chart below) you find that the bulk of the work is being done by the expectations indicator, which at 108.5 is now showing its second highest reading ever, and only just below the all time series high of 109.7 which was hit back in the heady days of January 2005! (The indicator series only goes back to September 2004). 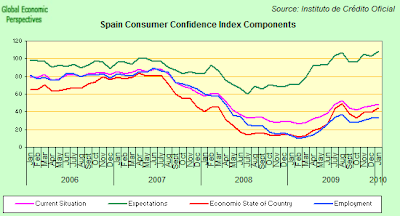 This is not only incredible, it is extraordinarily hard to understand. Even those who doubt that the situation is quite as bleak as people like me argue it is must surely admit that Spain now faces a difficult and testing time. My contention is not that there is anything wrong with this finding, but rather that this is how Spanish people actually think at the present time. They have no idea of the actual economic reality, or of what the future has in store for them. They are virtually being kept in the dark. This is the worrying part, and I fear that all this may well now end badly, very very badly.