Well, that didn’t last long, now did it. Two consecutive quarters of minimal GDP growth seem to have exhausted the forces of a more than fragile Spanish economy. All the post-June data we are seeing suggests the economy has now turned the corner (in the bad sense), and we should expect a negative quarterly GDP reading in the July to September period.

Perhaps the clearest indicator we have so far of the shape of things to come is offered by the August services PMI reading, which shows the sector went back into contraction in August, a performance that for a country which depends to some significant extent on tourism is really pretty striking. 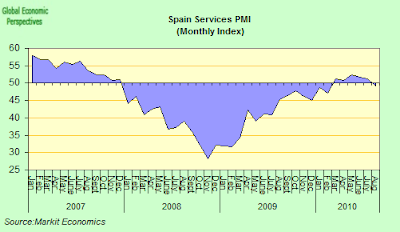 As Andrew Harker, economist at Markit and author of the monthly report commented:

â€œMonths of broadly stagnant demand have now resulted in a decline in activity in the Spanish service sector, albeit a marginal one. It looks increasingly likely that the anaemic GDP growth seen during the second quarter of the year marks the high point of the recovery for the time being. The recent rise in VAT has further added to problems for service providers as weak demand has largely forced firms to absorbcost increases.â€

The manufacturing sector continues to turn in a very slight positive reading, but both new orders and employment are falling. 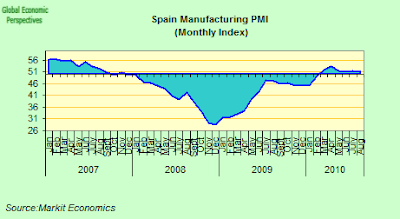 Car sales were down 25% in August over August 2009, due in part to the withdrawal of the “cash for clunckers” programme, and in part to the rise in VAT, and finally industrial production data showed that output even fell very slightly in June. 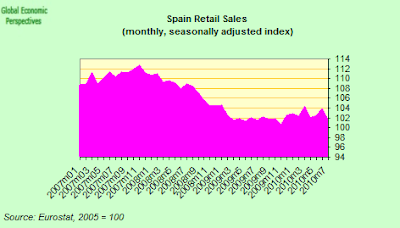 And unemployment, which is now heading up over and beyond the 20% mark (20.3% in July) was up again in August (even by 12,000 on a seasonally adjusted basis. 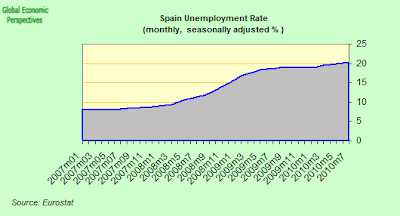 We don’t have the July construction data yet, but the position with retail sales is likely to be repeated, following a strong 7% (month on month) pre VAT surge in June.

Exports did recover to some extent during the “good times”, but to nothing like the extent they did in the more strongly competitive exporting countries. 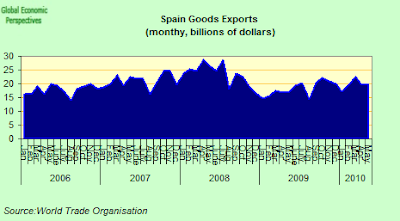 And in fact, as we saw in a previous post, the net effect of the stimulus was to temporarily widen the trade deficit (strange, Monsieur Trichet on being asked by a journalist at the last ECB press conference when he planned to withdraw his stimulus, was most adamant that the ECB non-standard measures did not constitute “stimulus” – I guess it’s lucky for US citizens that Ben Bernanke doesn’t see things that way). Now, whether from the ECB or the Spanish government, the outlook is for gradual withdrawal of stimulus, which means the only realistic outlook for a badly structurally distorted Spanish economy is towards a slow but steady decline. 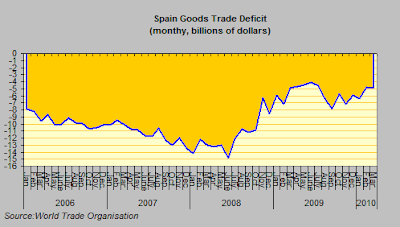