The financial crisis has re-shaped the regions and countries in financial terms. New country groups emerge in analyses and decisions by the investors receiving specific interest or countries far from one another are compared. It is honourable that Hungary enjoys distinguished attention especially because international institutions, investment houses or even rating agencies more often than not appreciate that Hungary has been capable of a huge fiscal consolidation in the most difficult times of the crisis. Edward Hughâ€™s article â€˜Hungary Isnâ€™t Another Greeceâ€¦â€¦Now Is It?â€™ is all the more striking.

I think we could easily agree that the Hungarian economy and financial policy management by the Government had and have to face a lot of challenges while correcting mistakes made mostly in the past. It seems, however, that the greatest test is to prevent prejudices, perceptions based on false findings, poor information and mistaken conclusions or the consequences thereof. Unfortunately, we find several examples of this kind in Edward Hughâ€™s article as well. In this context, now we can take occasion to clarify the most characteristic mistakes and misunderstandings in relation to the Hungarian economic and financial policies.

Such is one of the key findings in the article that plays down structural reforms made in the recent period. The author makes ironic remarks that reform measures would lie in the elimination of 13th month pension benefit and restructuring family allowances in total suggesting that it was all to take place as far as changes to the pattern of public expenditure are concerned. Against this background, if we want to list only the last yearâ€™s most important measures the following should be mentioned in addition to the elimination of 13th month pension benefit:

– We changed pension indexation with anticyclical effects for the subsequent years;

– Retirement age will gradually increase from 2012 by six months each year until 65 years of age both for men and women;

– We restructured our too generous housing subsidy scheme including the elimination of interest subsidies and social policy aid replaced by a narrower new subsidy scheme;

– Energy price subsidies will be phased out of the social policy system in 2010;

– We changed the method of sick-pay disbursement with a general rate lowered by 10 percentage points;

– Entitlement criteria of family allowance were modified. Now it is available only until the lower limit of age,

– Headcount stop entered into force in government agencies from the summer of 2009;

– Nominal wages were frozen for those employed in the public sector;

– Scheme of Treasurers was set up from the summer of 2009 to ensure disciplined budgetary management.

These measures will cut pension expenditure in the general government budget by more than 3 per cent of GDP as a result of only the structural moves involving the pension system as shown in the Table below. 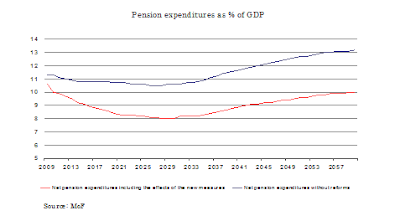 In addition, restructuring of housing subsidies, energy price subsidies as well as family and sickness allowances will result in an expenditure cut by 1.0 per cent of GDP in the year of entry into force with increasing order of magnitude in the subsequent years. The Table below indicates well what size of savings we can achieve for more years from the measures relative to the Convergence Programme of Hungary created before 2009. While postponement of investment and development projects could obviously help short-term savings in the crisis period, restructuring of the social system, restraint on public sector wages, sustainable pension expenditure and controlled financing in healthcare should result in long-term, sustainable and structural savings for government budget. 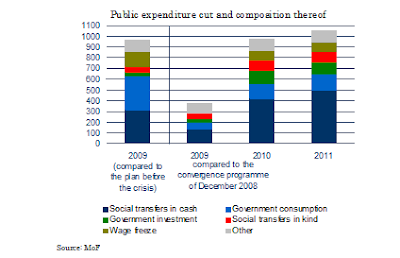 It follows that restructuring moves we took will ensure a declining budget deficit and public debt from 2010. Therefore, the following governments will not need any more to take new austerity measures requiring political sacrifices but to remain on the budget course now established and reap the profit from the results arising in the subsequent years.

Of course, there are reform tasks left on the next government even after the present budget restructuring. The most recent fiscal reorganization involved the composition and balance of government budget. However, six or more month could not be enough to transform institutions and institutional framework. Only formal agreements could be signed for long-term restructuring of companies providing for public transport, which are yet to be fulfilled. Furthermore, more should be done to improve healthcare, education and local governments functioning with the purposes of efficient use of financial resources and raising the level in public services offered, rather than only financing. Thus, after the present fiscal restructuring should be followed by institutional changes during the next election period.

As far as labour market conditions and tendencies are concerned, Edward Hugh has again some wrong findings. It is false that public sector employment grew. Headcount in the public sector went down by 100,000 from 2006. Last year saw only further slowing cut in employment, given the government order (approved in the summer of 2009) of unchanged staffing in force including vacancies.

The new is the start of â€œPathway to Workâ€ Program, which is intended for those living on social aid to get back to labour market through communal services projects. In statistical terms, employment in communal services is included in the public sector. To receive a realistic picture, the figures must be adjusted for these effects. Presently, some 100,000 have been involved in the program that opens the way for those concerned to the business sector, rather than to the public one.

This process is reinforced by the shift in tax burden of 3 per cent of GDP. In this context, there is no understanding Edward Hughâ€™s remark that â€œâ€¦ we have seen little in the way of noticeable impact on either employment or on Hungarian exportsâ€. These measures have entered into force only recently (for a few weeks) so it is not reasonable to expect spectacular changes in export statistics applying to the present period yet to be published. That said labour cost cut is the highest in the lower income bracket while it is important for average wage as well. Tax wedge on average wage and marginal tax wedge will go down by 9 per cent and 20 per cent, respectively, relative to the previous year. As a result, changing tax legislation may cause significant improvement in not only labour cost but also in labour efficiency to entail increasingly better international competitiveness and position heading for export markets. As is seen from the figures below, independent analystsâ€™ views underline this improved situation and positions of Hungary. 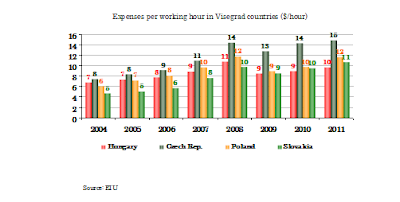 Based on the most conservative estimates, it is slowly expected that growth outlook in Hungaryâ€™s export markets improve putting the country on a more stable and sustainable course of growth than could be hoped on the basis of domestic consumption artificially boosted through further indebtedness both of the public sector already strongly indebted and of the private sector still more strongly indebted.

Revision of 2010 forecasts does not reckon with higher domestic consumption from the former projections. We do not expect, in contrast with Edward Hughâ€™s allegation, economic growth. In our view, recession of 0.3 per cent could be achieved at export growth of 5.5 per cent. Since Hungary managed to achieve export growth at a higher rate than demand for imports grew in the export markets, the shift in tax burden, lower labour cost and higher labour efficiency, e.g. improving competitiveness suggest that the forecast below is reasonable or even much more careful than many projections given by analysts. 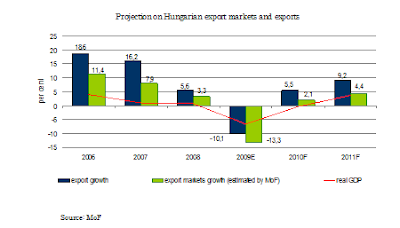 Critics over public debt are in sharp contrast with Edward Hughâ€™s remarks criticising domestic consumption drop. In particular, the lack of coherence seems on such an economic analysis that would, at one time, require artificial boost on the domestic consumption and a decreasing government debt. Public debt may be lowered below 60 per cent relative to GDP by 2015, due particularly to the fiscal consolidation underway while peaking undoubtedly at around 79 per cent in 2010. However, for the sake of decency, it must be said that 3 per cent of public debt makes only a part of debt in gross since it increases FX reserves from the IMF package.

Also, it should be noted that average public debt relative to GDP in the euro zone will make 84 per cent at the same time. That said there is not much criticism to make over the ruling government moves, especially in relation to public debt since the measures taken in the recent past were as good as only suitable for pushing down the debt level. It is interesting that Edward Hughâ€™s analysis refers to Eurostat forecasts (autumn of 2009) in relation to fiscal deficit where the European Commission now admitted to have assessed Hungarian fiscal outlook with too much criticism. That is, while they had first found that government deficit would make 4.1 per cent of GDP for 2009, now they see it below 3.9 per cent as originally set out.

Partly with reference to Mark Pittaway, Edward Hugh highlighted external debt as Hungaryâ€˜s most pressing problem, somewhat misunderstanding the economic history after the regime change in 1989, and implying that public debt had kept the Hungarian economic growth trapped all the way unlike other countries in the region with better debt figures at the time of regime change. However, this analysis does not consider the economic policy achievements in the second half of the 90s or the fact that public debt has resumed to seem growing since 2001 while private sector indebtedness increased importantly from 2006 on. 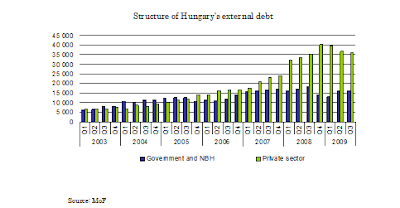 If this is really supposed to be the most worrying problem of the domestic business environment, then it should be considered that definitely positive processes were shown on the countryâ€™s external debt in the recent months. We saw in 2009 that external financing capacity of Hungary could be positive amid a slightly negative balance of payments as a permanent feature for the coming years since the difference between the balance of payments and financing capacity results from EU capital transfers that may increase further in the years ahead. As a result of these processes, Hungaryâ€™s external indebtedness may continuously plunge. Therefore, the package of measures placing emphasis on domestic financial equilibrium and competitiveness in export markets due to which the ratio of imports to exports significantly improved, may offer a solution to external indebtedness as most pressing problem as well. 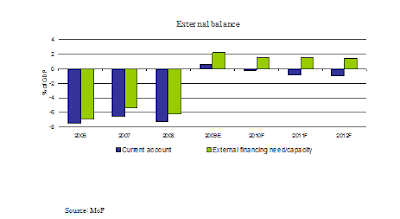 Also, measures taken in the recent past allowed for Hungary to restore market confidence and do without drawing on IMF loans. It is interesting that Edward Hugh cites separately my statement that â€œWe donâ€™t need IMF money any more and my expectation is that since Hungary is targeting the same track for the future, we wonâ€™t need financial helpâ€. This comprises no novelty, however, for those being aware of financing plans of the Hungarian public sector. The country has not drawn down instalments due from the International Monetary Fund since September 2009.

Also, it is well-known that the Government wished to maintain co-operation with the IMF even in this form. What is more, the Parliamentary opposition made statements on similar plans in the recent past. There is no ground for the assumption that the country would deviate from the path of structural reforms, and that the market-based financing would endanger the structural balance of government budget. In this respect, drawing a parallel to Greek political declarations cited does not consider the â€“ not so insignificant – fact that the Hungarian statement was made on the stable market financing after a stabilisation programme and as a result, beside an improving structural balance while Greece, in contrast, did so after a significant deterioration of its fiscal balance.

Based on the foregoing, it could well be a matter of mistake or misunderstanding that this analysis found Hungaryâ€™s path similar to Greeceâ€™s in terms of economic and budgetary processes of 2009. However, it must be a warning to Hungary since it shows that unchanged preconceptions, perceptions and prejudices could imply the risk of misunderstanding even despite huge fiscal restructuring with the greatest political sacrifices.

13 thoughts on “So where is Hungary?”