All the recent critical attention which has been directed towards Greece of late might seem surprising to some (or part of a global anti-PIGS conspiracy, to others) since, on the face of it, the Greek economy had managed over the last decade to appear to be something of a success story. Indeed the economy did clock-up a more than respectable growth rate, and the country even seemed to be well on the road to economic convergence with its richer neighbours, with GDP growing at an average annual rate of around 4.25% between 2000 and 2007, as compared with a 2% average for the euro area as a whole. 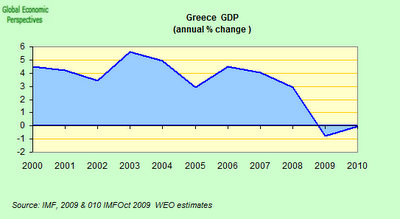 In particular there was a sharp acceleration in the growth rate in the early years of this century, stimulated in part by preparations for the Olympic games. As a result, living standards, measured in terms of GDP per capita in purchasing power standards (PPS), rose from 84.25% of the EU-27 average in 1997 to almost 95% in 2007. But as we all now know, and as many a Greek philosopher has often told us, “seeming” is not the same thing at all as being, and the current Greek case is no exception. Behind this wonderful facade, all was far from being as it should have been.

This was the case, not only in terms of the rather questionable data which was being sent out for external consumption – although, it should be noted, not everything was completely phoney, since Greeks today are surely much better off than they were in 2000 – but also in terms of a failure to explain how this rather spectacular change in fortune was achieved, or how the sustainability of the model on which it was based was to be ensured. As Titus Maccius Plautus reputedly put it, I am a rich man for just as long as I don’t have to pay back my debts, and of debts in Greece there were plenty, especially in the public sector.

So the growth we saw in the first eight years of this century was hardly normal, since it was based on a model of growing indebtedness which was always going to fail one day or another. One consequence of this is that no one really knows what “trend” growth in Greece would look like at this point (the same goes for those other two Eurozone “star performers” Spain and Ireland) since we don’t really know how much of recent growth was valid, and how much was due to overheating, and we won’t really start to get a clear picture till we see what the downside is, and how far it runs.

In an earlier post I suggested that while Greek Sovereign Debt was far from dead at this point, in the long run it was almost surely dead. Here, and in the posts which follow I will try and explain why I think that is the case.

Thus the very positive initial impression becomes rapidly tarnished when you start to think about the fact that, despite all the supercharged growth, the average Greek general government deficit remained over the EU Stability and Growth Pact 3% of GDP limit during the entire period (hitting a maximum of 7.5% of GDP in 2004, see chart below). 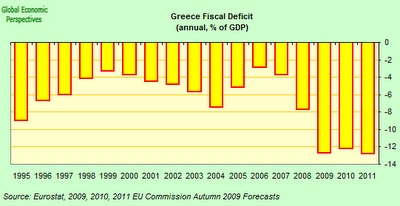 Given that the Stability and Growth Pact philosophy is effectively one having a 3% average target, with resources being accumulated during the good years to allow space for stimulus programmes which involve larger deficits during the bad ones, this state of affairs seems to be astonishing. The accident was just waiting to happen, since having overrun the allowance with growth which was over 2 percentage points above the average, there was no spare capacity left to be deployed during the downturn, Greece will now join a number of key East European economies – notably Hungary and Latvia – in being forced to impose a contractionary fiscal policy during what surely about to be the country’s most serious economic downturn since the early 1980s. Ouch!

But in addition to this immediate, and acutely painful, problem, the consequences of all those years of excessive government spending have most definitely not been benign, and in this post, and those that follow I will focus on three of them.

i) The accumulating government stock of debt, which according to the last EU Commission forecast is set to reach 135% of GDP by 2011. 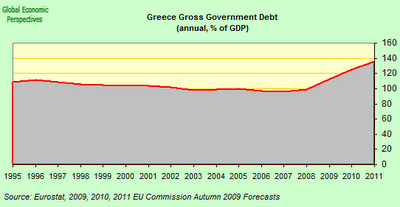 ii) The inflationary pressures to which the Greek economy was subjected by the decision to press the fiscal accelerator right down to the floor (hit the pedal to the metal) well beyond long term sustainable capacity, with the consequent loss of competitiveness this involved. Greek inflation was seldom above the EU 16 average during the critical years, and this neglect, of course does not come free. 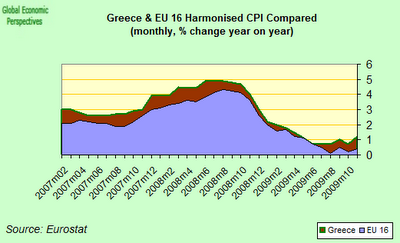 In particular the loss of competitiveness with Germany is very evident. 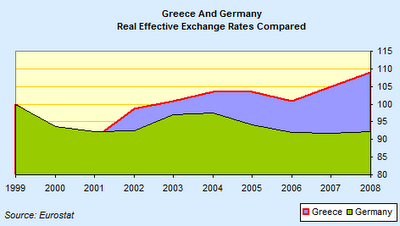 (iii) The huge external deficit (current account deficit of 15% of GDP) which was the result of this massive overheating of domestic demand, and the large external debt which has been accumulated as a consequence. It is this external debt problem which makes Greece so vulnerable to financial crisis at this point, and it is this which differentiates the Greek case (and the Portuguese and Spanish ones) from, say the Italian one, since while in Italy government debt position is not that much better than the Greek one, most of the debt is actually held by Italians, and while Italy’s savers are content to continue funding their country (that famous “home bias”) Italy will not be so vulnerable to pressure from external investors. 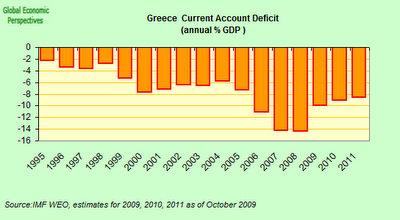 In fact the Greek external balance has deteriorated rapidly from 1997 onwards, with the current account deficit reaching 14% of GDP in 2007, declining slightly to 12.75% of GDP in 2008. The principal culprit was the growing deficit in the trade balance, which rose to 17% of GDP in 2008 (almost 4 percentage points over the level in 1997). In particular goods exports were disappointingly weak, while import growth was strong, in line with buoyant domestic demand. Trade in services, on the other hand, went in the opposite direction. The balance of services exports improved, attaining a surplus of more than 8% of GDP in 2008, 2 percentage points higher than in 1997. However, this improvement fell far short of compensating for the deterioration in the goods trade balance. 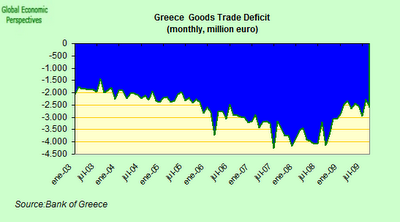 So let us be clear. It is this situation Greece has to correct. Greek society needs to lower the level of national indetedness, and the only way to do this is through an export surplus. But obtaining an export surplus implies the restoration of competitiveness to Greek industry. Greece needs to implement a significant internal devaluation, without this correcting the fiscal deficit will only involve playing around with the tip of the iceberg, and default in the longer term will become inevitable.