As Europeâ€™s leaders struggle to convince markets that their Greek debt problem-resolution-proposals are actually viable, and will really do the trick, last week’s flash PMI readings seem to have attracted rather less attention than they might. Nonetheless, the fact of the matter is that it is steadily becoming clearer that the current slowdown in Eurozone economic growth is turning into something more than just another one of those pesky â€œsoft patchesâ€. The pace of economic expansion in core Europe has slowed dramatically, falling back in July for the third consecutive month, according to the latest flash PMI. Commenting on the flash results Chris Williamson, Chief Economist at Markit said: â€œThe Eurozone recovery lost almost all of its momentum in July, recording the weakest growth since August 2009 when the recovery first began. Excluding the financial crisis, the July survey was the most downbeat since the Iraq war in 2003, and consistent with a flat trend in quarterly gross domestic product. 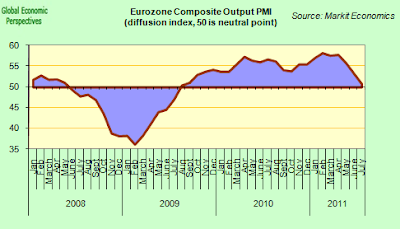 In fact the rate of expansion â€“ the composite indicator registered just 50.8, only slightly above the dividing line between growth and contraction – was the lowest since August 2009, when the recovery was just starting out. More importantly (for the longer term) new business coming in showed only a very marginal increase in July, registering what was the smallest rise since demand for manufactured goods and services first started to return to growth back in September 2009. Levels of incoming new business fell in manufacturing for the second month in a row, declining at the fastest rate since June 2009 â€“ with new export orders actually falling for first time since July 2009. 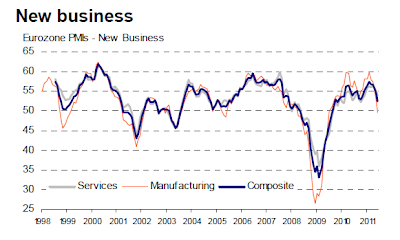 What this means, of course, is that the slowdown has now extended, spreading deep into the heart of the core, with both services and manufacturing in both Germany and France affected. 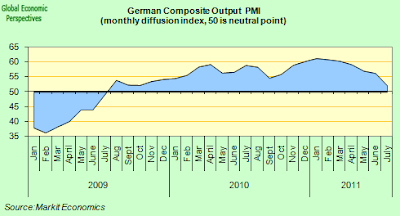 The German composite index fell to 52.2, from 56.3 in June, and while the latest reading still remained comfortably above the 50.0 no-growth value, the month-on-month index fall of 4.1 points was the largest since the November 2008 post Lehman drop. Tim Moore, Senior Economist at Markit said in his report â€œAlmost in the blink of an eye, German private sector output has gone from rapid growth to a slow crawl.

But even as growth in the core economies approaches stall speed, out on the periphery a new recession seems increasingly on the cards, and most importantly in countries like Spain and Italy which have so far managed to keep their heads just above the waterline. Growth in the second quarter of the year looks likely to have been minimal in both cases, and the outlook for the third quarter suggests we are entering a bout of economic shrinkage. 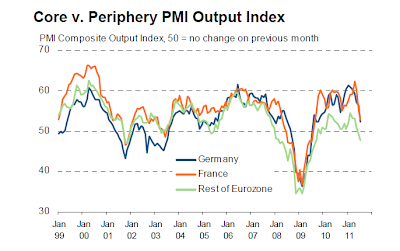 The PMI readings also coincide with the impression offered by monetary indicators. 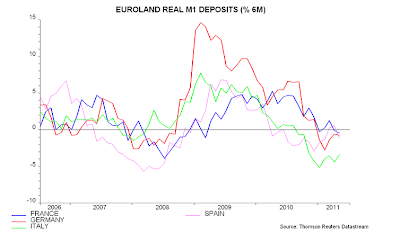 As Henderson Global Investorsâ€™ Simon Ward points out, in late 2010, while real (ie inflation adjusted) current bank deposits were contracting in Spain and Italy, they were still growing robustly in both Germany and France, implying a solid economic growth economic outlook in the core for the first half of 2011 (this monetary indicator is often thought to give an indication of activity with a 6 month lag).

But currently, as can be seen in the above chart (which shows rates of six monthly growth) real deposits have even started to contract in the core, while in Italy the rate of shrinkage has accelerated considerably, suggesting that the earlier â€œtwo-speedâ€ Eurozone recovery may now be about to give way to a period of much more generalised weakness, reinforcing the impression given by the PMI order indexes. What is most striking is the way Italian M1 deposits have been contracting much more strongly than Spainâ€™s have of late, although this development should not take us completely by surprise, since, as I have been consistently pointing out (see here, here and here) it has been clear from both real and survey data for some months now that Italy was heading towards recession again. 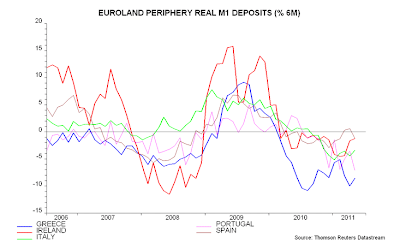 And looking at the second monetary chart that Simon provides, it is evident that the weakness in Spain and Italy forms part of a much more general contractionary phenomenon on the periphery, but then I imagine that the idea that Greece and Portugal might be in recession comes as a surprise to no one.

Part of a Bigger Global Picture

Of course, the vulnerability we are seeing on Europeâ€™s periphery is being played out in the context of a global economy which is itself clearly losing momentum. This generally weakening in global growth has been clear from the evolution in the global manufacturing PMI for some time now. 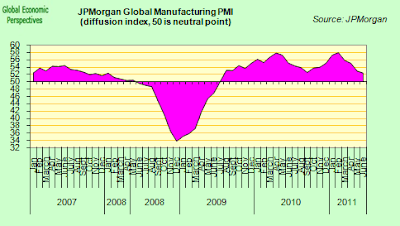 And the latest China manufacturing flash PMI (which showed contraction for the first time since the middle of 2010) suggests the ongoing pattern will be once more confirmed in July, with global manufacturing moving closer to the critical 50 dividing line which marks the frontier between growth and contraction. 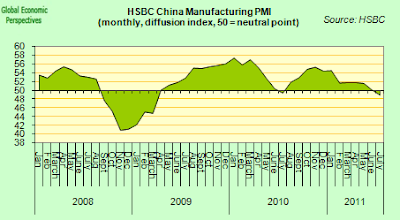 Even more importantly the Chinese export order component (which could be considered as a long leading indicator giving us information about possible activity levels three to six months from now) reinforced the idea that the slowdown is likely to be extended in time.

This impression (of an extended period of lower growth globally) is also confirmed by the business expectations component of the German IFO. I would about anticipating an early termination of the slowdown till we see some real sign of sustained improvement in Chinese new export orders and a solid uptick in IFO expectations. 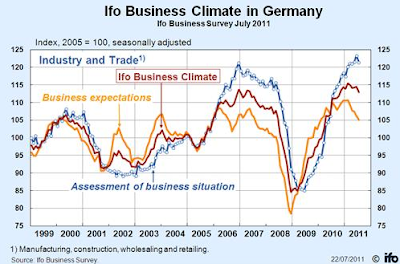 So Why Donâ€™t We All Be Just That Little Bit More Vigilant?

Where does all this that leave Europe in policy terms? Well, in principle recent developments in the real economy should present the ECB with significant monetary policy dilemmas, given the risks to the integrity of the monetary union that could result from a combination of reform/recession weariness out on the fringe and bailout fatigue in the core. Evidently the slowdown will make it harder to meet deficit targets in Spain and Italy, and will most likely mean there is a need for new measures which will become harder and harder to sell to voters, while any deterioration in the jobs market in Germany (we should be watch the unemployment numbers in Germany in the coming months) could well make bailout contributions harder to drum up. As John Hussman put it in a note to investors this morning:

“As I’ve noted several times in recent months, bond market spread imply very low near-term (3-6 month) probability of default in any Euro-area country. A sovereign default is much more likely to occur near the end of the next bear market, whenever it occurs, than at the start. As Ken Rogoff and Carmen Reinhart noted in their book This Time It’s Different, “Overt domestic default tends to occur only in times of severe macroeconomic distress.” The most likely window for a Greek (or other Euro-nation) default will be at a point when France and Germany are experiencing economic downturns sufficient to douse the political will to bail out their neighbours at a cost to their own citizens”.

So in theory what these leading indicator readings should be telling us is that we should expect little more in the way of rate rises during what remains of 2011. Continuing to raise rates into an economic slowdown where there are clear risks of financial instability would not seem to be sound monetary policy.

In addition, given the way the pace of manufacturing input price inflation now seems to be cooling rapidly (see chart below), it would not be surprising to see a change the wording of the risk assessment for price stability from â€˜on the upsideâ€™ to â€˜balancedâ€™ at the next meeting. This would avoid a lot of potential communication difficulties in the months to come, and would open the door up to a much more flexible interest rate policy. 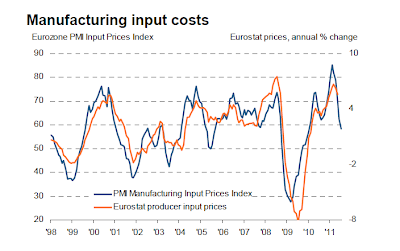 One critical point to grasp is that the ECB decisions themselves have now become one of the main factors which will influence the outcome of the slowdown, not simply via the standard monetary policy path on Europeâ€™s core economies but via the impact its decisions will have on policy sustainability on the periphery, and though this channel on the level of global risk sentiment.

In this sense ensuring economic growth is not the only distraction which could divert the ECBâ€™s attention from its principal mandate in defence of price stability, since there is also debt stability to think about too. Recent days have show that large peripheral economies like those of Spain and Italy, far from having totally decoupled from the smaller and weaker countries, are now once more being drawn back into the maelstrom. 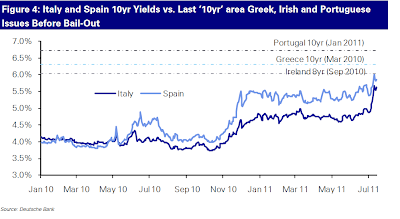 In particular Italyâ€™s government debt to GDP level of 120% has been attracting growing attention. Simple calculations show that just to stabilise debt at this level with the previous prevailing interest rates the country needed a 3% annual growth in nominal GDP. Now, of course, they are likely to need slightly more. But real GDP growth this year will be significantly under 1%, while all those earnest efforts by the ECB to push the countryâ€™s inflation rate down below 2% will simply serve to help nudge the debt level upwards, in the process raising the premium investors will ask to buy Italian debt, with the implication that next year the country will need an even higher rate of nominal GDP growth, and so on, and so forth.
And the situation is Spain is hardly better, with 85% of mortgages being attached to variable rates, pushing Euribor upwards simply starts to weaken the hitherto comparatively robust performance of the bank mortgage books, while the slower economic growth will make government deficit targets even harder to maintain.

So really, the issue is not whether the ECB was right to go ahead with this months rate rise given its main mandate, the issue is whether members of the Governing Council could by any chance prove themselves sufficiently flexible in the future to change their discourse in the face not just of Greek default woes, but also of heightening recessionary and debt management risks? In his report just before the last rate meeting, Deutsche Bankâ€™s Gilles Moec argued that the situation was â€œnot bad enoughâ€ for the Bank not to raise. I wonder if the deterioration we have seen since that time makes it â€œnow bad enoughâ€? Just how bad do things have to get for us to reach that point, and just what is prudent and what is risky behaviour in current circumstances? Certainly Council members need to be vigilant, but in particular they need to be vigilant that their attempts to avoid one problem do not inadvertently generate another, even more difficult to handle, one.