Victor Mallet had a piece on public works minister JosÃ© Blanco’s Thursday speech in the FT yesterday. My feeling is that the Spain of Zapatero looks more and more like the Hungary of Gyurcsany with every passing day, and I say this more from the point of view of the twin deficit problem, and the impression the administration gives of things being totally out of control and no one knowing what to do, than anything else.

I am not at all party political, and my observation should in no way be read in that sense. The situation has only deteriorated since Solbes and Vergara were ousted, and the only mystery for me is why exactly they were replaced with a team who have no understanding of macro economics whatsoever. For the record, I predict the IMF will have a permanent delegation in Madrid before 2011 is out.

As the following chart – from Dominic Bryant at PNB Paribas – makes clear, while Spain’s households and corporates are busily deleveraging, government finances are deteriorating in a totally unsustainable fashion. 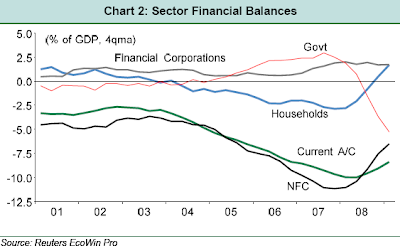 On the details of Blanco’s statement, I would simply make three points.

Firstly, it is far from clear that this is a serious proposal. There must be a battle royal going on inside the PSOE even as I write, and this proposal may well have more to do with internal party debates than anything more substantial. Economy Minister Elena Salgado has been notably silent, so one possibility is that Blanco made the speech simply to “test the ground”.

Basically, the current Spanish administration want to hear nothing of internal devaluation, and will try anything to avoid that going down road. The biggest issue they have is growing deflation, and falling revenue as prices drop. This has been a common picture across Eastern Europe, it is just that the states in the South of Europe are rather richer, so there was more flesh on the bone when the crisis broke. They have a salary increase for public servants pencilled in for next year, and this, of course, is a commitment which it will be impossible to honour in the present climate.

Secondly, the biggest unspoken issue we are seeing in one economy after another is the retreat of a lot of activity back into the informal sector. So called economic “greying”. Just look what is happening to revenue in Italy. Again, we have seen this happening throughout the East. The contractions in the Baltics are nowhere near 20% in my view (although they are, of course, very large), people simply are declaring less and less. This is a problem the IMF are struggling with day in and day out in Latvia. But this whole process makes things very difficult for government finances, as we are seeing. More tax increases on the very rich and professional middle classes will be entirely unproductive as they will only accelerate this process.

Lastly, increases in VAT. These are again very counterproductive, since they hit consumption directly, at a time when consumption is declining anyway. All such increases do is accelerate the contraction (IMHO the IMF is wrong to be advocating this in the East, but undoubtedly they feel they have little alternative if they wish to preserve some minimal semblance of social services, which they need to do to get the population to agree to their packages in the first place). I wouldn’t even mind betting that a VAT hike would be nearly revenue negative, for the consumption drop it would produce and the retreat into the informal economy it would accelerate.

11 thoughts on “Raising Taxes In Spain Is Not A Solution!”