Paul Krugman had a short post recently drawing attention to a rather foolish and ill-thought-outstatement originating in the mouth of German Finance Minister Peer Steinbrueck.

Germanyâ€™s finance minister told AFP in an interview that cutting interest rates too low in an effort to counter the global recession could create what he called a dangerous â€œgrowth bubble.â€ – “On the one hand we need to boost the economy, on the other hand we must make sure that a policy of cheap money does not lead to a new growth bubble founded on credit, as happened after September 11, 2001,” Steinbrueck said.”It is therefore important that the focus, at least in Germany, be on sustainable investments in infrastructure and less on consumer spending financed by debt,”

Apart from the point Krugman wants to implicitly make about interest rates, the point about consumer debt in a current account surplus economy like Germany is extraordinarily misplaced. You have about as much chance of fuelling up a property boom in Germany as you have of setting up a ski slope in hell (that is, there is a “ski slope in hells” chance of getting this outcome – or put another way the likelihood is infinitely small). In Spain on the other hand, even while the possibilities of fuelling a further property boom right now are about as close to zero as you can get, the country’s leaders waste not a moment in trying to convince people to go out, borrow and buy, even though with a 10% current account deficit to correct, and corporate and household debts which run to over 220% of GDP, what they need to do is start saving, and not borrow more. This very ineptness (and basically I would argue lack of understanding of what monetary policy is all about) was also highlighed recently by statements from the European Union’s Economic and Monetary Affairs Commissioner Joaquin Almunia, who said (in an online chat for the Spanish newspaper El Pais) that whille getting financing costs down was necessary and important, interest rates should not be allowed to fall to negative levels in real terms.

“At this moment, it would be good for the cost of financing to go down……..We shouldn’t go back to a situation in which real interest rates are negative, as we know from experience that this leads to excess indebtedness, low perception of risk and new bubbles which always end by blowing up in our faces.”

Essentially two things are being confused here. Negative interest rates (such as those Spain had between 2002 and 2006 – you know, the ones that lead to the current Spanish crisis, see chart below) are highly undesireable during the upswing in a business cycle, when an economy is “overheating”, since you are simply giving more stimulus to economies which are already stretched to capacity – and negative rates may thus produce “bubbles”, as they obviously did in both Ireland and Spain – but these very same negative rates are obviously highly desireable during a downturn, and especially during recessions of the kind we are seeing at the moment, since they are one of the tools policymakers can use to stimulate slumping economies – all basic Econ 101 really. And of course, we are all currently heading into one of the most important recessions since WWII, or hadn’t our “machine-reader” commissioner noticed? 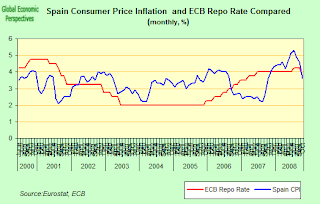 While I’m on this sort of topic, Krugman has a lot of useful and interesting material on the proposed US stimulus plans. The numbers are truly impressive and awe inspiring, with the fiscal deficit set to rise to close to (or even over) 10 per cent of GDP in 2009 according to initial estimates from the Congressional Budget Office.

But even this kind of aggressive fiscal assault may, as Krugman indicates, fall woefully short of what could be needed to stop the US labour market turning really sour, at least in the short term.

The new CBO budget and economic outlook is out. Above is its forecast for the GDP gap â€” the hole stimulus has to fill. Iâ€™d guess that the CBO estimate, which has unemployment averaging 8.3 percent in 2009 and 9 percent in 2010, is actually too optimistic (see 3, below), but even so it puts the Obama plan in perspective: a 3% of GDP plan, with a significant share going to ineffective tax cuts, to fill an 8% or more gap.

A comment which set me thinking about what is actually happening in Spain right now. Unemployment went over the 3 million mark in December, and is now running at something over 13.5% of the economically active population (according to Eurostat estimates). During 2009 this figure is certain to rise further, possibly to 4.5 million, or 20% of the economically active population (my guess, though it is a guess, since there are so many “unknowns” at this point – but we will surely be over the 4 million mark come next December).

Yet Spain’s Labour Minister Celestino Corbacho proudly points to a 10 billion euro public works and infrastructure programme which is intended to create 300,000 jobs during 2009 – 300,000 new jobs in an economy losing jobs at the rate over over a million a year, again is like trying to light a damp match during Noah’s flood. And obviously Spain’s resources are seriously limited in terms of fiscal resources to fight a problem on this scale. My back of the envelope calculations suggest that a capital injection – Japan style – of between 40% and 50% of GDP may be needed to sort out the accumulating pile of non performing corporate loans and grossly over-valued mortgage backed securities. Evidently Spain cannot handle a problem of this magnitude alone. So would those whose monetary policy helped light this bonfire, now like to step forward with the fiscal policy hose to try to help extinguish it? Are you listening Joaquin Almunia?

16 thoughts on “Putting Out Fires During Noah’s Flood, Or Eyeless In Gaza Part II”