The current generation of policymakers seem to be like Captains of large ocean liners, out there on the high seas, bereft of either compass or adequate charts, trying hard to calm there worried passengers by telling them nothing is amiss. But the charts are there, if only they would look at them, and in the present Spanish case, unlike the old refrain, the future is ours to see, and it has a name: Germany.

For those willing and able to examine our present situation with a reasonably open mind, a comparison of the recent history of the Spanish and German economies can prove illuminating, especially since, as I will argue below, there are strong structural homologues to be observed in the evolution of the two.

This post will contain comparatively few words (what a blessing!) since I will try and let the charts themselves tell their own story, in the hope that concepts which seem to be difficult to convey verbally, may be easier to grasp visually.

The first myth I would like to debunk is that it simply is not true that the Germans are a group of “non consumers”, and inveterate savers. Back in the 1990s German private consumption enjoyed a huge boom, a boom which ground itself to a halt around the year 2000. It is only since 2000 that German private consumption growth has been lacklustre, and incapable of driving the economy. (I am using a Bloomberg chart here, since I don’t have a long enough time series to hand to make my own version). 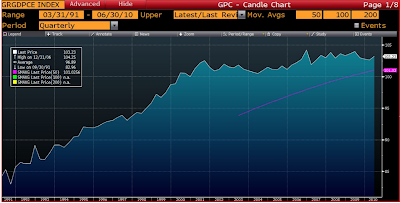 Now if we look at the same chart for Spain, we can see that private consumption growth enjoyed the same kind of “blossoming” that German consumption did between roughly 1999 and 2007. 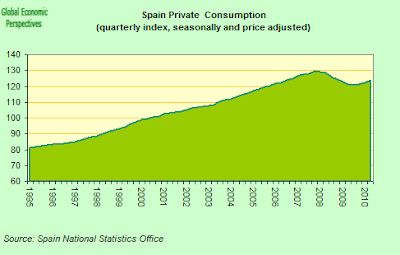 But more than the phenomenon of the consumption boom in and of itself, what is interesting is what was driving it. Unsurprisingly we find the “usual suspect” – rapid increases in credit. Again, the following charts belie the idea that Germans have always been a nation of meticulous savers. 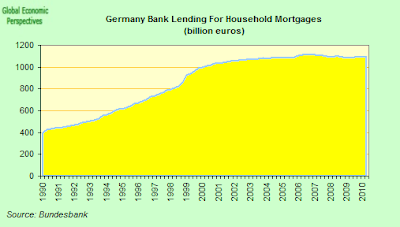 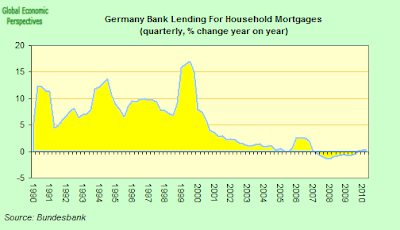 And again, the Spanish charts for mortgage increases tell a very similar (if even more exaggerated) story. 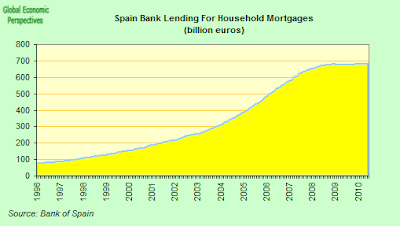 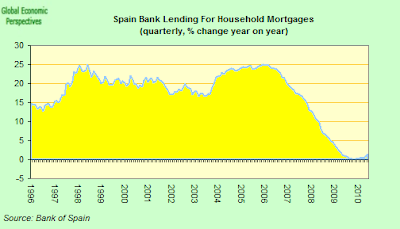 And it wasn’t only households, corporates were busy at it too. Interestingly, corporate borrowing seems to have had a brief renaissance in Germany on the back of the current crisis. 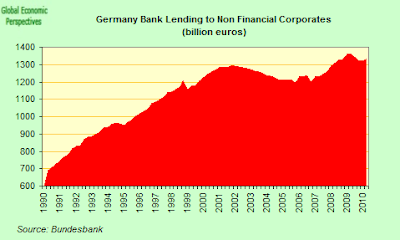 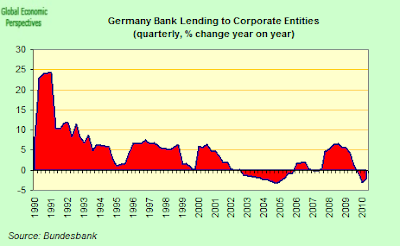 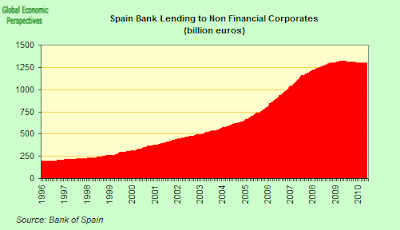 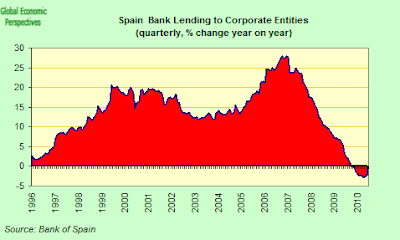 When we come to look at the last set of loan charts, I would point of two features. In the first place, total private sector debt is not that different between the two countries, despite the fact that German GDP is around twice as large as Spanish GDP. 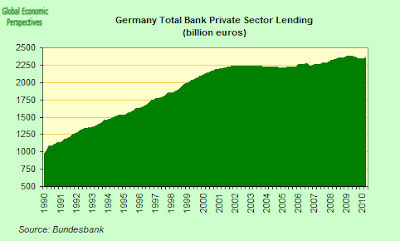 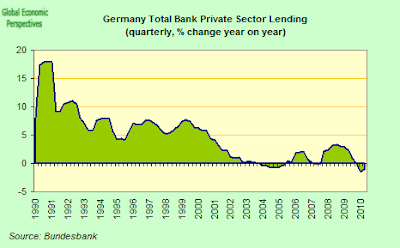 And in the second place, look at the long tail on German year-on-year borrowing, this is the point where those with eyes to see should be able to discern something of the future which awaits Spain. Interannual lending in Spain isn’t going to climb back up again, and we should expect it to trawl around the zero percent level for many years to come, as Spain’s private sector deleverages itself. 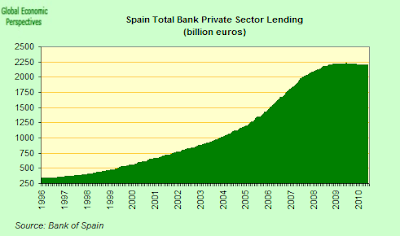 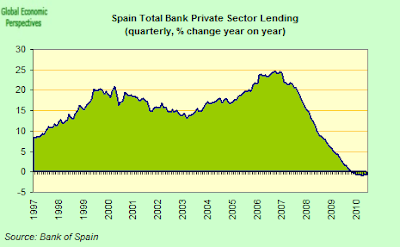 Which brings us to the next point, the association between lending booms and current account surpluses. As we can see in the chart below, Germany was no exception to the rule here, and all through the duration of the consumption boom the country ran small current account deficits. Deficits which then became surpluses after the huge structural adjustment the country went through in the transition from being a consumer driven to being an export driven economy. 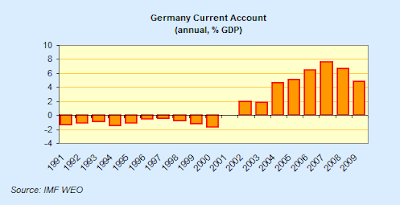 And this is the path that Spain will now surely have to follow, but just note the massive difference in scale between the two. Spain’s adjustment will need to be enormous. And how could this have happened we might like to ask ourselves? Were all the relevant drivers fast asleep, lurched over their wheels? How come no one “saw this coming”? 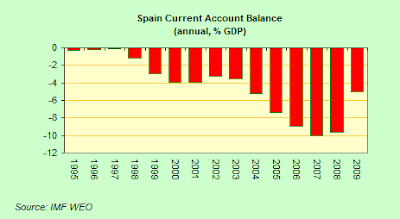 Given the magnitude of the correction, it is not really surprising that the IMF seem to want to hope against hope that it really won’t be necessary. As the chart below illustrates, they seem to be hoping markets will sustain the current account deficits all the way through till 2015. As can be seen, Spain is the worst case offender, and the country where the structural transformation will need to be largest. So why do the IMF continue to believe in something which is scarcely credible? It could be that they simply accept the Spanish government’s own optimistic idea that private consumption will come back to the 2% growth level again, kick started by a surge in borrowing. But a study of what happened in Germany makes that highly unlikely. Spain’s banks are having trouble enough financing themselves as things stand, are people seriously suggesting the markets will now fund another bout of additional leveraging? 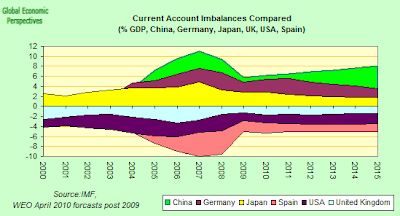 And if the private sector isn’t going to do the borrowing, then who is? Since simple book-keeping tells us that having a CA deficit on the one hand implies capital flows on the other to fund it. The only conclusion I can come to – and this is what I argue in this post – is that we are assuming the government is going to continue to run a sizeable deficit, or that there will be straight fiscal transfers from other parts of the Euro Area to Spain. Otherwise the numbers simply don’t add up.

What I have been arguing so far should be relatively uncontroversial for anyone with a sound grasp of applied macro. What comes next is more of a hypothesis. As we have seen, economies seem to transit from being consumption driven to export driven, so we might like to ask ourselves, is the process merely random, or are their underlying structural dynamics at work. As I am trying to argue in the German case, the shift doesn’t seem to be a cultural one, and if Spain follows Germany down the same road then we will certainly know it isn’t.

So what could be driving all this. Well, as Claus Vistesen and I have speculated, ageing populations and the demographic transition may well have something to tell us here. Using Modigliani’s life cycle saving and borrowing idea, and the Swedish demographer Bo Malmberg’s idea of population “ages” (child, young adult, middle aged and elderly), Claus has prepared the following chart in an attempt to illustrate the process. 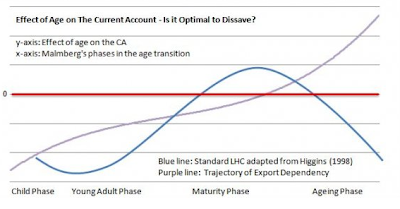 Of course, all of this at the moment remains at the levl of hypothesis. I tend to use median population ages as a rough and ready measure of ageing, and (even though I wouldn’t want to claim any precision here) it is interesting to note that both Germany and Spain have started to transit off towards export dependence at around the 40 median age point. 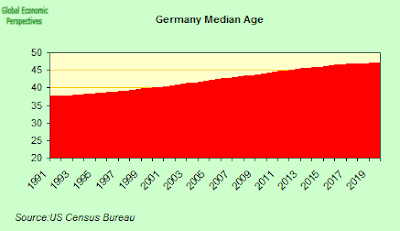 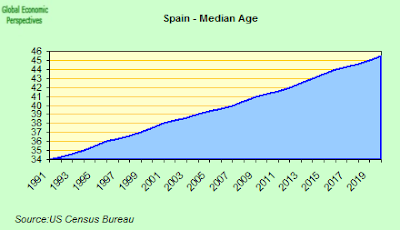 Still, this is early days yet, and we will know a lot more in this regard when we see how the different countries all along Europe’s periphery perfom in the years to come. Will they, as the IMF and the EU Commission seem to assume, go back to being consumption driven, or will they be condemned to follow the German path? Certainly Hungary, to take just one example, seems to look more and more as if its economy which desparately trying – but so far unable – to transform itself into yet another Germany.

The worrying thing looking at the above inter-country comparison is how much larger Spain’s correction is going to need to be than Germany’s was. As Wolfgang Munchau pointed out in the FT yesterday, Germany entered the eurozone at an uncompetitive exchange rate and embarked on a long period of (quite painful) wage moderation and deep structural reform. In fact, Germany entered the Euro with an excahnge rate which was too high, give the new role exports were going to play in economic growth. The German adjustment can be clearly seen in the REER chart below, as can the very large adjustment that Spain will have to make in comparison with the German one. 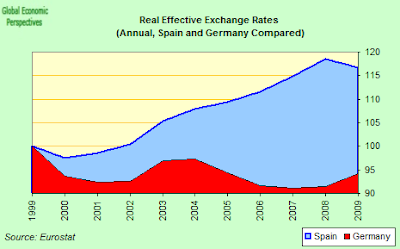 When macro economists say this will be “painful” they don’t do so to be sadists, they say this since they know this is going to be hard, very hard. And doubly so when almost all those responsible for taking policy decisions at all the respective levels seem to deny that it is going to be necessary. I have advanced two suggestings (a systematic reduction of 20% in wages and prices in Spain, or a temporary exit of Germany from the Euro Zone). Since neither of these have gained any traction at all, it is reasonale to assume they are now not going to happen (at least in any orderly way). But the car is still heading full speed towards that brick wall. When it finally does crash, will the Queen of England once more say to Luis Garicano, “but tell me Luis, just why was it no one saw this coming?”.