“A report from the Bank of Spain showed Spanish lenders borrowed a record 126.3 billion euros ($161 billion) from the ECB in June as investors shunned the nationâ€™s banks. Spainâ€™s banks increased borrowing 48 percent from 85.6 billion euros in May. That compares with a drop of 4 percent to 496.6 billion euros that the ECB provided lenders in the whole euro area. Spanish banks havenâ€™t sold any bonds publicly in the past two months on concern the nation wonâ€™t be able to cut its deficit without hurting the economy.” 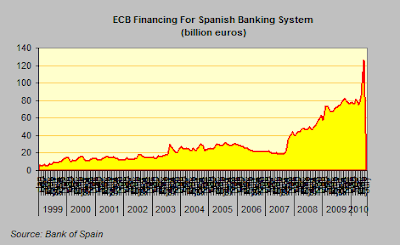 Pretty hard to argue now the Spanish bank borrowing from the ECB is simply in line with the country’s share of total GDP I would have thought. Also, after having trended upwards ever so slightly for a couple of months, Spain’s industrial output actually fell back again in May (by 0.3%) while output in Germany roared ahead by 2.9%. Obviously not everyone is getting the same benefit from the weaker euro, could competitiveness have anything to do with it, I wonder? 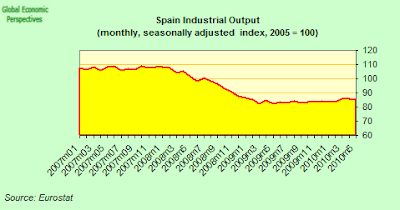 Quoted in the Financial Times earlier today Klaus Regling, chief executive of the European Financial Stability Facility said the fund would be “ready to act whenever the politicians tell us to act.â€ I guess the situation of Spain’s banks would be one of the things he must have had in mind.

Using a footballing analogy, you get to see a lot in the press about how this club is chasing this player, while that one is chasing another one, until the moment of the actually negotiations comes. Somehow, at that point the sporting press goes strangely silent.

Of course, when those much talked of stress test finally come out, we’ll all be able to see for ourselves that Spain’s banks – apart from a few ropey old Cajas that no one in their right mind would be interested in anyway – are in absolutely sterling and tip top condition (and not like their shabby German counterparts at all). Won’t we JosÃ© (ViÃ±als)?

Or are those reponsible for the Spanish banking system finally going to face up to their responsibilities, amble out of that closet they have been tightly locked away inside for the last three years, and follow the advice of Jacques Cailloux, chief European economist at RBS, by seizing opportunity provided by this months “getting it all out in the open” fest to start restoring investor confidence by really getting down to straightening out the mess?

The number of people employed continues to fall, unabated, as measured by contributers to the social security system. On a seasonally adjusted basis the number hit 17.66 million in June, down from the January 2008 peak of 19.42 million. 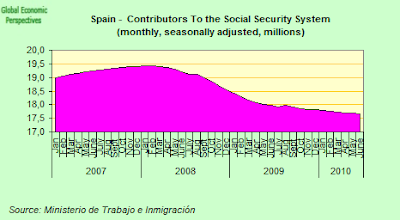 Seasonally adjusted unemployment in Spain – as reported to Eurostat – was at 19.9% in May, up slightly from the previous month, and with no real sign of reducing. 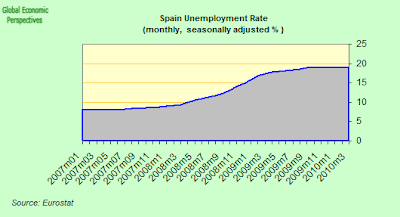 House prices continue to fall slowly according to the TINSA index. 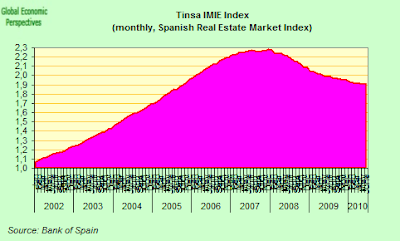 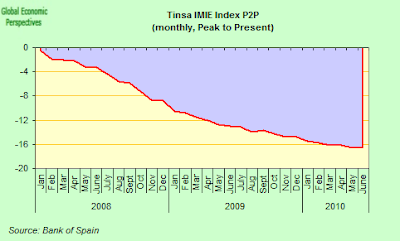 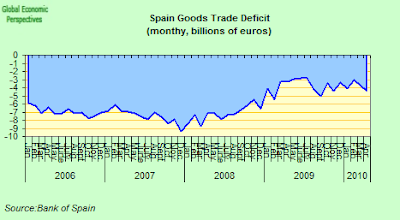 As did the current account deficit, which has now widened again considerably from the lows reached in the autumn of 2009. 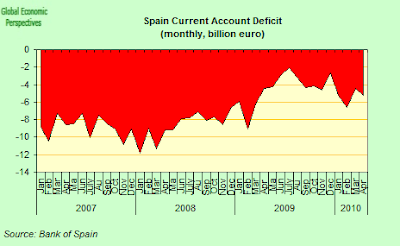 The manufacturing sector showed very slight growth in June, as both output and new order growth fell back. 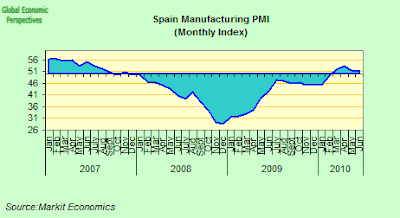 As Markit’s Andrew Harker said in his report:

â€œLatest PMI data highlight the continued uncertainty surrounding the Spanish economy. Output growth slowed for the second month running and firms still do not have the required workloads or confidence to prevent job losses. With the VAT rise kicking in and further austerity measures to follow, there appears to be a real risk of the private sector falling back into recession.â€

While services activity actually contracted for the first time in four months. 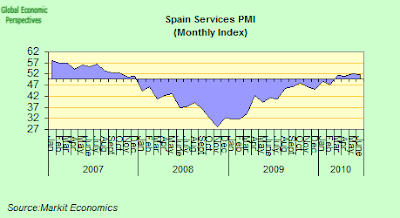 Again, I will leave Andrew Harker to sum the situation up:

â€œLatest Spanish service sector PMI data provide some worrying signs regarding the path of the sector. Foremost among these is the first drop in new business since February. Also of note is the marked weakening of sentiment seen in the previous two months amid worries surrounding austerity measures in Spain and the effects these will have on the fragile economy.â€

And finally, we have the inflation data, were I have put the CPI up against the German one. Worryingly, after falling sharply at one point in 2009, Spain’s inflation is now once more back over Germany’s. 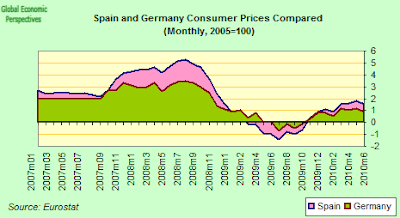 Which means the the Spanish economy is once more losing competitiveness against the German economy, the exact opposite of what you want to see. And in July VAT went up two percent. Many argue this move is totally benign, but it will be interesting to see how Spain’s retail sales move over the months to come, and how the inflation differential with Germany is affected. Didn’t anyone tell them there are no free lunches in economics? And how cutting back on government fiscal spending – necessary as it is, since more government deficit is only going to get the country more into debt, not to mention the impact on investors – is going to help sort all this lot out, well I’m afraid that’s a complete mystery to me.

8 thoughts on “Oh It’s All Gone Quiet Over In The Eurozone!”