So WHO exactly is raising interest rates at the moment? Or even thinking of doing so? The knee jerk response to this particular question would seem to be; not too many people. On the contrary, most major central banks and now also their peers in the emerging world seem to have come to the conclusion that to counter the crisis, they need to apply both conventional as well as unconventional monetary policy measures. Especially, among the major central banks quantitative easing is the name of the game with only the ECB still clinging on to the proverbial fig leaf. So, I ask you just one more time, in this sort of situation just who exactly is raising rates?

Well, it is far from being a done deal yet, and at this week’s rate setting meeting the bank baulked at the idea, if you want to know what it means to be stuck between a rock and a hard place at the moment, you could do worse than take a look at Hungary which, even among its CEE peers, gives every impression of being rather battered and bruised. And just to make matters worse, Hungary received another blow to the kidneys last weekend as Prime Minister Ferenc Gyurcsany announced that he was resigning his position. On the face of it, it is difficult to blame the guy since with Hungary being the first economy in Eastern Europe to secure a loan from the IMF to the tune of 20 million euros the corresponding budgetary cuts demanded look almost cartoonishly unrealistic relative to the economic situation.

Even as he presided over a reduction of the budget deficit from 9.2 percent of GDP in 2006 to about 3.3 percent last year, Gyurcsany was criticized in February by some opposition parties and the central bank for his proposed 900 billion forint ($4.1 billion) tax shuffle to boost growth. Critics said more spending cuts were needed to stabilize the economy in the short run and boost growth in the long run.

â€œThe government no longer had any room to maneuver,â€ Gyorgy Barcza, chief economist at KBC NVâ€™s Hungarian unit, said yesterday. â€œWithout new measures, the budget deficit would be more than the target.â€Failure to continue austerity measures could result in a downgrade of the countryâ€™s credit rating, David Heslam, Director of Fitch Ratingsâ€™ sovereign team, said in a statement today. The agency rates Hungaryâ€™s debt BBB, the second-lowest investment grade, with a negative outlook.

The Socialist Party is less than half as popular as its biggest rival. Backing for the government started slipping when it introduced austerity measures to close a budget gap in 2006. The resulting economic decline was worsened by the global crisis, forcing the country to seek international aid. The party had 23 percent support last month, the lowest in 10 years, compared with 62 percent for the largest opposition party, Fidesz, pollster Median said on its Web site on March 18. Gyurcsanyâ€™s popularity fell to 18 percent, making him the most unpopular premier since communism. The poll of 1,200 people has a margin of error of 2 to 6 percentage points.

As Edward put it recently, it is difficult not to note a irrevocable pattern in the (unfortunate) countries subject to IMF intervention whereby they collapse under the yoke of the measures demanded in trade for the loan. Of course, we should not only shoot at the IMF since in the context of e.g. the EU one wonders the extent to which western Europe can just idly watch a country such as Hungary spiral into the abyss without extending some kind of bilateral help. Note in passing here that Gyurcsany’s resignation marks the second case of government jitters in an IMF supported economy. The second would be Latvia where the government resigned recently.

As it could have been expected the market was none to happy about the PM’s resignation which brings us to question of raising those rates. Consider consequently that the Forint which have already been pounded relative to the Euro completed a 2.6 percent drop to 308.62 against the euro (click on image for better viewing). 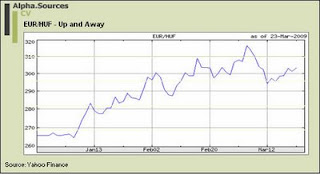 Consequently and following the Prime Minister’s resignation the central bank was forced to move with comments that all tools would be deployed to avoid the Forint depreciation to spiral out of control. Now, I would not want to contradict myself here and let me very clear then; I think that a weak Forint is a fundamental part of whatever future Hungary may have but in the near term and with the rating agencies thoroughly marking the outlook for Hungary with the negative label it is a tightrope walk for policy makers not least because we still have the unresolved issue of translation risk whereby liabilities are denominated in foreign currency (mostly swiss francs though) and assets in Forints. Conclusively, it is difficult to see why, given the economic reality, the central bank would want to raise rates, but it is also difficult not to concur that they need to do something with respect to ensuring some kind of order vis-Ã -vis Hungary’s stakeholders not to mention investors. Perhaps this duality more than anything shows us the almost impossible situation Hungary now finds itself in.

Meanwhile and moving across the pond for a minute it appears that US authorities have just raised the stakes in the dramatic jeux d’horrible that is the unfolding economic crisis. Thus and following the Fed’s shock and awe treatment of the markets last week as Bernanke rolled out measures to buy treasuries (presumably) in the primary market we got the long awaited details in Timothy Geithner’s plan on how to deal with those toxic assets and consequently how to restore confidence in markets so that we just might go back to normal whatever that is these days.

Quite naturally, the plan (see also here and here) which includes most notably a public-private partnership scheme designed to take care of about 1 trillion USD worth of toxic asset has been parsed by many of the most astute economic pundits. From the horses own mouth this is how it is described;

The Public-Private Investment Program will purchase real-estate related loans from banks and securities from the broader markets. Banks will have the ability to sell pools of loans to dedicated funds, and investors will compete to have the ability to participate in those funds and take advantage of the financing provided by the government.

The funds established under this program will have three essential design features. First, they will use government resources in the form of capital from the Treasury, and financing from the FDIC and Federal Reserve, to mobilize capital from private investors. Second, the Public-Private Investment Program will ensure that private-sector participants share the risks alongside the taxpayer, and that the taxpayer shares in the profits from these investments. These funds will be open to investors of all types, such as pension funds, so that a broad range of Americans can participate.

Third, private-sector purchasers will establish the value of the loans and securities purchased under the program, which will protect the government from overpaying for these assets.

The new Public-Private Investment Program will initially provide financing for $500 billion with the potential to expand up to $1 trillion over time, which is a substantial share of real-estate related assets originated before the recession that are now clogging our financial system. Over time, by providing a market for these assets that does not now exist, this program will help improve asset values, increase lending capacity by banks, and reduce uncertainty about the scale of losses on bank balance sheets. The ability to sell assets to this fund will make it easier for banks to raise private capital, which will accelerate their ability to replace the capital investments provided by the Treasury.

This program to address legacy loans and securities is part of an overall strategy to resolve the crisis as quickly and effectively as possible at least cost to the taxpayer. The Public-Private Investment Program is better for the taxpayer than having the government alone directly purchase the assets from banks that are still operating and assume a larger share of the losses. Our approach shares risk with the private sector, efficiently leverages taxpayer dollars, and deploys private-sector competition to determine market prices for currently illiquid assets. Simply hoping for banks to work these assets off over time risks prolonging the crisis in a repeat of the Japanese experience.

Macro Man offers nothing but a sigh, Paul Krugman is in despair, Calculated Risk also seems skeptical that this is the right approach and finally Yves Smith also chimes in with a “thumbs down”. I tend to agree with the skeptics and even though I have not really studied the proposal in detail the principal problem for me is that the government is putting up money for assets of which some are surely worthless and others may be work significantly less than current book value. In this way, it does nothing to solve the underlying issue and the risk for the taxpayer seems substantial.

Ah well, perhaps I and the rest of the gang above are just party poopers. What is certain is that the markets liked it and in fact Macro Man may have hit the proverbial nail on the head when he recently, and once again, evoked March Madness (click on image for better viewing). 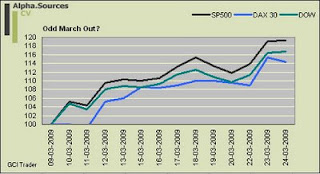 Of course, if there ever was something resembling a sucker rally it is this but so far things look as they are working. Also we cannot rule out that this initiative may just be what it takes to allow these assets to be marked to (a credible) market which would mean that we had taken one important step in moving forward. One thing which I do like by the activism in the US is that it is just that; activist which flies in the face of ostrich attitude prevailing on this side of the pond.

So, what do Hungary and the US have in common here? Except being in the midst of their worst economic crisis of, arguably, all time not a whole lot I guess. However, they are both being forced to move into uncharted waters when it comes to fighting off the current mess in the global economy and her financial system. It will be very interesting to see whether raising rates as well as the stakes will bring forth the intended effects.

12 thoughts on “Of Raising Rates and the Stakes”