Not only is the French economy the grateful recipient and beneficiary of sustained German export growth, so too is Poland (I’m sure they’ll be glad to hear that in Warsaw!). According to the FTs Jan Cienski:

Polandâ€™s economy grew by an unexpectedly strong 3.5 per cent in the second quarter; the countryâ€™s statistical agency said on Monday, thanks in part to continuing strong exports to the rapidly rebounding German economy, as well as resilient domestic demand.

In fairness to Cienski he then does go on to inform us that according to the statistical agency “the main driver of growth was domestic demand, which grew 3.9 per cent”. But then he falls back on himself again, since he immediately adds “many German manufacturers buy parts from Polish factories, and when the German economy grows â€“ it is expanding by the fastest rate in two decades at the moment â€“ it pulls Poland along behind it”.

But then, hold on there, just wait a minute: “For the first time in many months, however, Polandâ€™s trade balance was negative, as imports surged 18.2 per cent, a sign of a maturing economic recovery”(a) 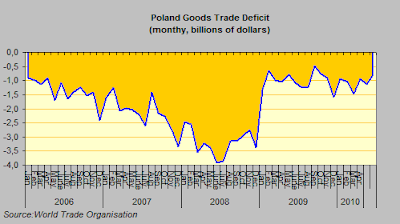 Can we run that again. The German economy is boosting Polish GDP by selling them imports? Can’t the people over at the FT do basic math? And can’t they get it into their mindset that there are export driven and autonomous consumer demand driven economies? And following the causal chain, it is those economies who take on debt (Poland and France in the current situation) and run current account deficits who become the customers of the last resort, and drive those who need to export to live. How can they possibly believe it is the other way round?

Of course, at the dis-aggregated level the whole world is interconnected, and I’m sure a lot of firms in the US benefit from domestic demand in China, even though no-one, but no-one in the US would argue that strong export growth in China was powering the US economy. The idea would simply not occur to them. More than demonstrating a high level of economic illiteracy, what is involved here is a certain lack of respect for the capacities of the the two countries involved (France and Poland, even if I suspect Cienski is himself Polish). Such is the power of the German Chou Chou train metaphor. I think a whole zeitgeist has to fall here, before we can make much more progress in our economic understanding of the situation.

For a fuller analysis of the current dynamics influencing the Polish economy, see my recent “Biting The Fiscal Bullet In Poland“. (And here if you want is a version in Polish).

(a) Incidentally, I take it here Cienski is referring to the combined goods and services balance when he says “for the first time in months”, since the goods trade balance has long been in deficit.

1 thought on “Not Content With France, Now It’s Poland Too!”