Spain’s Tinsa Price Index was out last week, and showed Spanish property prices fell again in September, and at an accelerating rate. As Tinsa point out in their report, both “Metropolitan Areas and municipalities on the Mediterranean Coast,” whose rates experienced a significant drop from the previous month, have contributed decisively to this steep decline”. 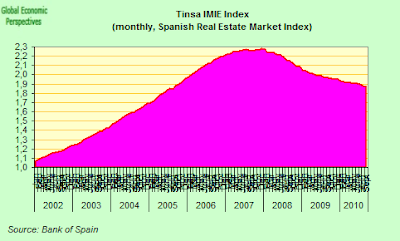 In fact, looking at the chart the other way round, prices have now fallen some 18% from their December 2007 peak. 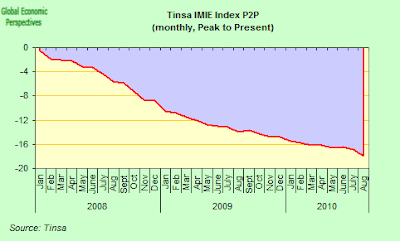 The strange thing is that the latest Tinsa data contrast sharply with the most recent finding of Spain’s National Institute of Statistics (INE) on the subject, since they suggest in their latest report that Spanish property prices actually rose in the second quarter (quarter-on-quarter) (and for the first time in the best part of 3 years), but this finding rather than reassure us that all is well (and as it should be) only serves to cast further doubt on the ability of the INE to maintain adequate statistics on the state of the Spanish economy, or at least to interpret the data they collect. This latest piece of statistical wizzardry lead Spanish property expert (and author of Spain Property Insight blog) Mark Stucklin to say “If you believe that, youâ€™ll believe anything”. Frankly, I’m inclined to agree with him.

Of course, it has become rather fashionable to question INE data interpretation of late (and I personally have had my problems with the seasonally adjusted employment numbers – in fact see these collected screenshots of the the backward revisions that were going on in the data as evidenced by Eurostat monthly reports) but this latest “faux pas” does make you want to ask “can’t they get anything right”? In fact the Statistics Office house-price-data, is full of incredible and eye catching details, like the suggestion that new build sale prices only peaked in the third quarter of 2008, following which they only fell back 7.77% from peak, before taking off again, if we are to accept the official data version of things. So this must have been the “bottom” that Mr Zapatero refered to in his CNBC interview (see below). And this, as Mark Stucklin notes “despite a glut of up to 1 million newly-built homes, and discounts of up to 20pc or more on any developerâ€™s price list you care to look at”. So is this how one of the greatest housing busts in living history ends, with a whimper and not a bang? Somehow I doubt it. 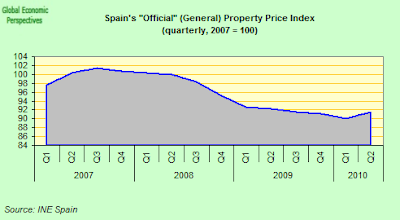 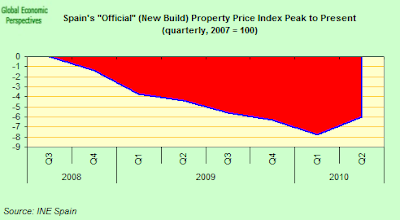 Naturally, I’m sure its a pure coincidence that this latest “surprise price reversal” data came out just before Jose Luis Rodriguez Zapatero went to New York to kindly inform all concerned that the Spanish property market is now on the mend. In an interview with CNBC (see this official Moncloa transcription of the interview if you have any doubt), Prime Minister Zapatero repeated the INE claim, stating that house prices are beginning to rise in some areas, though not, he admitted, in the case of holiday homes. â€œIn fact, in the last 2 to 3 months, we have seen that prices are not only not falling, but even rising in certain parts of Spain, where people buy their first home,â€ he told CNBC’s Maria Bartiromo. This, he argued, shows that â€œdemand appears to be on the rise.â€

MS. BARTIROMO: Are you expecting real-estate prices to continue coming down? Have they hit the bottom or not yet?

PRIME MIN. ZAPATERO: I think that the price of housing has hit the bottom. It won’t go down any more. For the past two or three months, what we see is that not only has it not dropped. But in certain parts of Spain, the price of housing has gone up. This is especially the case in those areas of — not where people are buying their second house, if you like, with the prices there have still gone down a bit, but rather where they’re buying their first, there the prices have gone down in the housing sector. So in general the prices have been stable recently, and they’ve even been increasing. So demand seems to be ticking up again.

Now, as that posse of irate INE defence vigilantes who may come chasing after me on this will no doubt tell you, the methodology they use is different from the Tinsa one, since it based on registered Notarial transaction prices, while the Tinsa index is based on asking prices, but come on, house prices rising again in Spain? Which world are we living in?

Of course, there could be another explanation for this seeming discrepancy (apart from fudging the numbers that is) and that would be that many of the actually new build transactions are not real transactions at all, but rather paperwork ones, as the banks move over the developers unsold property onto the books of their special purpose subsidiaries, and don’t mark down the price since they prefer not to show losses. Then, of course, the very same subsidiary offers the property for sale at a sizeable discount (and it shows up with the Tinsa index as an asking price), but since there are very few real new-build sales at the moment, these number never show up back in the notaries office, where all is quiet and orderly.

Sure, the data show that new house sales “seem” to have bottomed, and even picked up a bit (see chart below), but talking to developers and estate agents out on the street, this doesn’t seem to be the result of any real pick up in end user demand. It is more a question of banks responding to pressures from the Bank of Spain by moving their properties “out of sight” (if not out of mind). Meanwhile, the typical Spanish buyer is adopting a watch-and-wait approach, and will need a lot of convincing that they really have stopped falling before they move back in. Even the “experts” employed by the EU Commission are not convinced either, since they just published a report stating that Spanish property prices were still 17% too high. 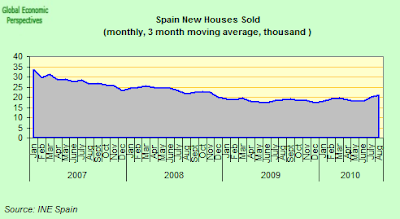 But if you want one, there is something more like a smokin gun out there which should tell us that this whole Spain property market recovery story is a bit strange, and that is the Bank of Spain data for total mortgage lending. This has hardly moved since the start of 2009 (see chart below) so it is far more easily reconcilable with the properties being transfered over to bank subsidiaries (complete with their “developer” mortgages) story, than it is with one of rising sales and rising prices. 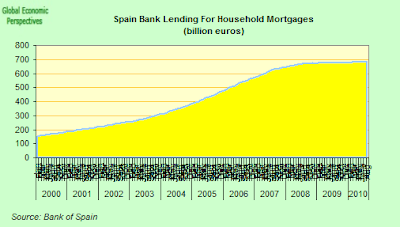 More than the house price story itself, which is hardly pleasing to the eyes, what I find most worrying is the way the Spanish administration seems to be boxing itself into a corner with its use of data. During the interview. Mr Zapatero also said the following in a response to a question about the outlook for the Spanish economy: “Well, our estimate is that we won’t have any more quarters where growth will go down. We think that growth will continue to improve, and this will also improve confidence in the Spanish economy”. But none other than Bank of Spain Governor Miguel Angel Fernandez OrdoÃ±ez recently asserted that the Spanish economy had visibly weakened in the third quarter, and the data we have certainly seem to back him up. And the fourth quarter outlook looks even worse. So which is it, will Mr Zapatero be able to eat humble pie, or will an army of bank analysts and hedge fund investors end up spending the whole xmas period going through all the Spanish data with a fine toothcomb? Mr Zapatero also says: “What’s happening is that our plans are being fulfilled to the letter”. This reminds me of other statements from other national leaders in other times. Would that those beyond the confines of his own small closed inner circle could find themselves able to agree with him when he makes such an assertion!