Last Wednesday was Epiphany. In Spain it is also a public holiday – Los Reyes Magos – a festival which celebrates the visit of the three wise men who came from the East to find the infant Jesus. Coincidentally on the eve of Epiphany this year the Moncloa did receive a visit from three wise men, although it is not clear whether they came (as tradition would have it) bearing gifts, or whether they brought with them a list of demands from further East in Europe about what Spain’s government ought to be doing to stop its economy falling apart.

Unfortunately, due to a technical fault (some say the website was hacked) there to meet them as they entered the gateway and fired up the browsers on their xmas-new I-Phones was not the Spanish Prime Minister, but a strange interloper, otherwise known as Mr Bean.

As the Financial Times put it in an editorial:

By any standards, it was an unfortunate beginning. Spainâ€™s six-month presidency of the European Union, which got underway this week, appears to have been subject to an attack by computer-hackers. On its first day, web-surfers navigating to the special presidency website found themselves staring at photos of Mr Bean, the hapless British comedy character who (some claim), bears a resemblance to JosÃ© Luis RodrÃ­guez Zapatero, the Spanish prime minister.

But the FT also makes a rather more serious point: “Mr Bean is famous for his stumbles and mishaps â€“ and Spain is also looking accident-prone at the moment.” This certainly rings true to me. And as if to confirm the point, Spain’s Secretary of State for European Affairs Diego Lopez Garrido stepped forward from behind the curtain yesterday – apparently representing the EU – to warn the Greek government that while coordinatinion within the EU was necessary “there is a limit, which is no bailout.” A point which various European officials had spent the best part of the week trying to deny (or at least strongly qualify) following Juergen Stark’s unfortunate Italian interview. Evidently news reaches Madrid slowly. The only fortunate thing in all this, is that most people don’t know who the hell Diego Lopez Garrido is, and probably it’s better that way, although the prospect of a six month Spanish presidency may make this situation hard to sustain.

And then we have the strange visit of the three wise men.

According to reports in the Spanish press JosÃ© Luis Rodriguez Zapatero, chaired, last Tuesday, a meeting in the Moncloa with a number of former politicians who are apparently – according to the press release – considered to be “Europe’s wise men”: Jacques Delors (former European Commission president), Felipe Gonzalez (former Spanish prime minister), and Pedro Solbes (former Spanish economy minister). Elena Salgado, current Spanish economy minister also attended the meeting. They ostensibly met to discuss ways out of the crisis and plans for â€œEuropean economic governmentâ€. The discussions, which lasted around three hours, were described as being â€œvery usefulâ€ and primarily concerned with â€œstrengthening policies for economic coordinationâ€ in Europe. Meanwhile, European Council President Herman Van Rompuy has convened an extraordinary EU summit, on 11 February, to discuss economic recovery, where the proposals which Zapatero was discussing with the three wise men will need to be presented.

What could all this mean, I asked myself? For an initiative on this scale, the composition of the meeting was hardly representative. And two of those present – Felipe Gonzalez and Pedro Solbes – while being highly regarded in Brussels, have both been publicly and strongly critical of the economic policy of the present Spanish government, so the conversation would have been far from cordial, to say the least. And what was Delors doing there? It couldn’t be, could it, that they were conveying a rather strong message that Spain has to get its act together if it doesn’t want to end up where Greece is now. Fortunately some additional light was thrown on the situation by an FT article this morning – the European Union is indeed planning to strengthen policies for economic cordination, but it is planning to do this by giving more power to the EU Council and Commission to apply â€œcorrective measuresâ€ against those member states that fail to meet their obligations under a new 10-year plan (yet to be outlined) designed to improve EU competitiveness and bring all that public debt back under control. And the irony of ironies in all this and is that the set of proposals are going to be advanced by non other than JosÃ© Luis Rodriguez Zapatero. That is, the turkey is actually about to propose the menu for xmas lunch.

As the FT puts it: “In a proposal likely to stir controversy among other EU governments, Mr Zapatero said the European Commission should be granted powers to police compliance with the plan, which is expected to be adopted in March and is known as the ‘2020 strategy'”.

Obviously Spain is likely to be the next country after Greece to be on the receiving end of just these very corrective measures? No wonder he was looking so grim before the TV cameras after last Tuesday’s meeting. What do you bet we don’t hear anything more of this “wise men” initiative, at least until not the next Epiphany.

In the meanwhile signs abound that Spain’s economy continues to deteriorate. In the first place Spain’s December services PMI is no better than the manufacturing one. And – with a reading of 45 – activity contracted at sharpest pace for five months in December. As (Markit economist) Andrew Harker says:

â€œThe Spanish services economy ends 2009 on a low note, reaching the unwelcome milestone of two years of continuous decline…s in activity. December data provide little indication that conditions will improve in the near future, with new business contracting and employment continuing to fall particularly sharply. The fragility of demand meant that companies were unable to pass on higher input costs to clients, further harming profit margins.â€ 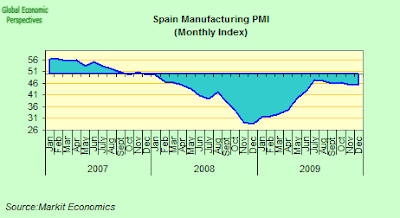 Retail sales also continue to fall regardless. They were down 1.2% from October (seasonally adjusted) in November. 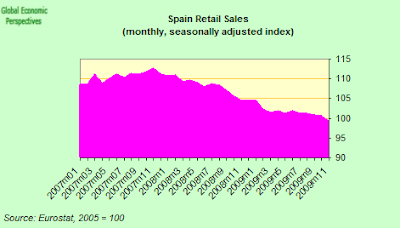 And they are now down nearly 12% from their November 2007 peak. The pace of decline is slow, but the attrition is constant, and there is no end in sight. 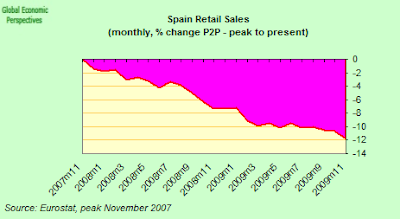 Of course, I didn’t get everything right in 2009. I was right that unemployment would go up and up, but it didn’t go up as fast as I had been expecting, and the INEM labour exchange signings came in still just shy of the 4 million mark in December, while I was forecasting back in April that we would hit 4.5 million by the end of the year.

What I hadn’t anticipated adequately I think was extent to which the stimulus programme would generate labour intensive employment, and the degree to which people could be moved over from unemployment into training courses, etc. Then again, most of the earlier waves of unemployment came from people on temporary contracts that were terminated, and now the people to go will be in permanent forms of employment, and evidently dismissing people with such contracts (unless the company simply goes bankrupt) is a much more laborious and costly process. Still, according to the Labour Force Survey methodology as supplied to Eurostat the 4.5 million milestone has now been passed, and onwards and upwards we go.

Certainly the numbers may not have gone up quite as much as I expected, but a rise of 794,640 in the number of unemployed over the last year however (while less than the 2008 increase) is hardly to be sneezed at. In fact unemployment was up 25.4 per cent in 2009. 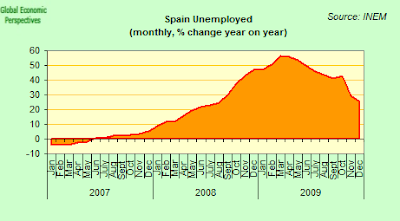 And more bad news on unemployment again today, since even if Spain provides only quarterly data on the unemployment rate, the European Union statistics agency Eurostat give a monthly, seasonally corrected number, which stood at 19.4 per cent in November, the second highest rate in the whole EU bloc behind Latvia. And youth unemployment is far worse, with Spain now facing the real prospect of having a “lost generation”, since unemployment among people aged from 16 to 24 is now 43.8 percent, the highest in Europe, and more than double the overall rate. The increase in unemployment among young people has been especially traumatic, with the rate jumping from 17.5 percent three years ago to the current level. And here again Spain stands out even among other European countries with problematic economies. In Greece, for example, the youth unemployment rate is 25 percent, while Irelandâ€™s is 28.4 percent and Italyâ€™s is 26.9 percent. 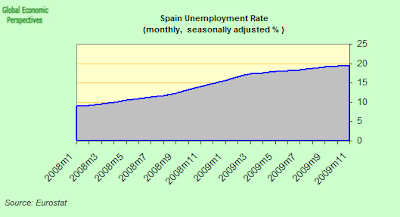 Month on month the number of people seeking jobless benefits rose by 54,657 in December from November, or by 1.4 per cent. Spain has said it wants to make the fight against unemployment one of the key planks of it EU presidency, but the Spanish government are the only ones who still foresee a return to falling jobless rates in Spain before the end of 2010. Both the EU Commission and the IMF don’t see any easing in current levels even in 2011. The simple reason for this is that even the most favourable forecasts for economic growth in the Spanish economy over this period will be weak, and then if you allow for productivity improvements, then the rise in output simply won’t be sufficient to generate employment.

And if you accept a more downside estimate like mine, then the unemployment level won’t even stagnate, it will continue to rise. Maybe we won’t see 25% in the first half of 2010, but we certainly could in the second half.

Unemployment wasn’t the only thing I didn’t get quite right last year. I don’t know how many of you remember the price list from my local bar I posted last January (see below), well I have to report it is exactly the same this January. The price of a coffee and croissant hasn’t gone up, but it also hasn’t come down, as I was suggesting it might. In fact Spanish 12-month inflation was 0.9 per cent on the year, suggesting that prices are rising (in general) rather than falling. 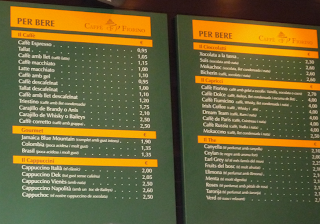 So you could say, whatever happened to your “deflation scare”? Well basically, it has been put on ice. But it will come back. If we look at what the EU are proposing in Greece, it is not only a reduction in the current fiscal deficit, it is a restoration of competitiveness. This correction of the external balances and restoration of competitiveness will also be a core part of the 2020 plan. What this means effectively means is internal devaluation. And using the same logic it is clear that it is just this policy which the new “co-ercive” economic coordination introduce in Spain under the “2020 (vision) strategy” – using those very powers which JosÃ© Luis Zapatero is himself now proposing.

Basically, the fact prices rose in 2009 is not good news, it is simply a symptom of the inability of Spain’s economy and society to correct itself unaided. Fortunately, it looks as if Spain may now be about to receive exactly the kind of help it is so badly in need of. Socorro, Socorro…..