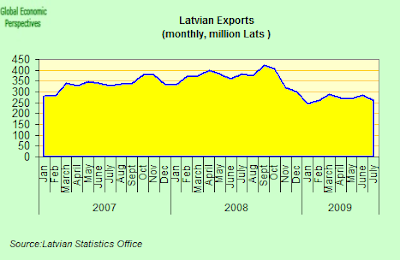 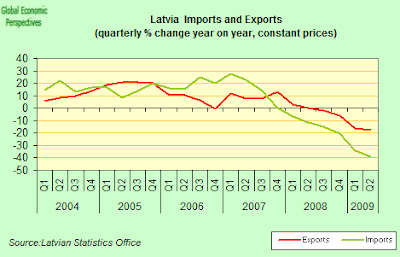 Latviaâ€™s economy shrank a revised 18.7 percent in the second quarter of 2009 over a year earlier in what was the second-steepest drop in the entire European Union (worsted only by Lithuania) according to detailed data released by the statistics office yesterday. The contraction, which is now the largest since quarterly records began in 1995, was revised down from a preliminary estimate of a 19.6 percent annual drop. And Latvia’s problem can easily be seen in the above charts which show the most recent movement in exports, and quarterly data for constant price imports and exports. The Latvian economy grew driven by domestic consumption and increased borrowing during 2006 and most of 2007, but then the country ran out of extra sources of cash, and so imports slumped, followed by exports as the global economy entered crisis. Now its time to pay back, which means the lines we see in 2006 and 2007 will now need to be repeated, only this time with exports on the top and imports below. Of course, really doing this will only be possible once the global economy recovers. But the key question is, will Latvian export capacity be ready when that critical moment comes, or will Latvia’s agony continue, stuck in a horrid “L” shaped “non-recovery”? The most recent data on foreign trade, which saw exports fall and the trade deficit once more widen suggest that the latter danger is far from being a mere theoretical one.

And I am not the only one to be raising it, since according to the latest report out from Nordea Bank, Estonia, Latvia and Lithuania, may well suffer deeper economic contractions than previously estimated as government austerity measures simply serves to sap domestic demand while export growth remains muted.

So well done Nordea! But please permit me to say that this discovery does come as a bit rich from analysts who have persistently remained in denial that the key to Latvia’s recovery was a substantial reduction in the price level in order to facilitate exports (on my view better achieved by formal devaluation, but by the express desire of the elected political leaders of the Latvian people now being carried out via a convoluted and painful process known as “internal devlauation”).

Still, it is interesting to see mainstream analysts starting to question the current orthodoxy that fiscal prudency will (due to the impact on investor confidence) lead to recovery in Eastern Europe, while here in the West our leaders have just re-affirmed the need to maintain fiscal stimulus, given the fragility of even those earliest signs of recovery.

“Worries over Latviaâ€™s public finances continue. Despite aggressive cuts in public spending so far this year, total central government spending in August 2009 was, extraordinarily, exactly the same as in August 2008. This is partly due to spending cuts being offset by increased social spending, and partly to some ministries and agencies awarding their employees big pay increases in June this year before imposing cuts in July as part of the IMF/EU programme. It is still too early to say that everything is fine in the state of Latvia.”

In the following monthly report I will examine just what evidence there is for the idea that Latvia’s economy has actually bottomed out.

The Fall In GDP Continues

Latviaâ€™s economy shrank an annual 18.7 percent last quarter, following a drop in gross domestic product of 18 percent in the first quarter. The charge downwards was lead by a decrease in private final consumption which fell an annual 23.21% (year on year – see chart). Government final consumption dropped bya mere 6.9%, but expenditure on gross capital formation (which includes the critical investment item) crashed by 38.1% – with construction (which forms part) down 29.5% (see chart below). Goods exports (63.6% of total exports) was down by 19.1% and the export of services by 15.7%. The slump in imports was, of course) even worse with the volume of goods imports (78.8% of total imports) down 39.4%, and the volume of services imports by 38.2%. 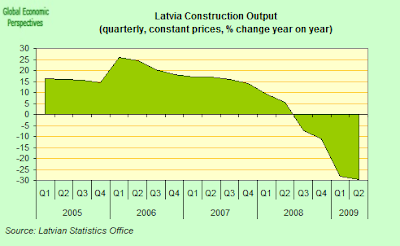 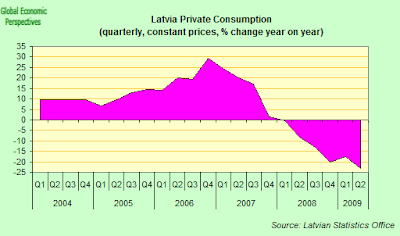 But Slows On A Quarterly Basis

Quarter on quarter, however, the rate of contraction did slow slowed substantially, from an 11% rate in the first quarter to a 1.6% rate in the second quarter. But even though the rate of contraction is now much, much slower, the economy is still contracting, so I think it is not quite accurate to say we have hit bottom yet. And hitting bottom is not the same as recovering, since there is unlikely to be any rapid bounce back, and any “recovery” is likely to have an “L” shape with a slight upward slope.

Meanwhile, and hardly surprisingly, during the month Latviaâ€™s credit rating was lowered by Standard & Poorâ€™s, with the long-term foreign currency rating being lowered to BB, two notches below investment grade, from BB+, with a negative outlook. According to S&P’s:

â€œThe rating action reflects our view of the political and economic challenges as a result of rapidly contracting nominal and real incomes and the associated pressures on public finances, as the country struggles to improve its growth prospects while maintaining a fixed exchange rate regime…..The outlook for growth beyond that remains highly uncertain, not least due to highly leveraged household balance sheets.â€

S&P’s estimate that Latviaâ€™s general government debt, which stood at 19 percent of GDP last year, will grow to over 80 percent in 2011, an estime which is broadly in line with current EU Comission forecasts.

The International Monetary Fund also agreed on August 27 to disburse the second installment (of around 200 million euros) of the 1.7 billion-euro credit line approved last December. The decision followed a long period of uncretainty. Latviaâ€™s government is trying to cut spending/or raise revenue by 500 million lati ($1 billion) a year between now and 2012, in a bid to get the budget deficit below 3 percent of GDP as part of an attempt to meet euro adoption criteria.

The IMF said in their statement that the program had been adjusted to reflect:

– a significant increase in the programâ€™s fiscal deficit ceiling in 2009 (up to
13 percent of GDP, compared with 5 percent in the original program) to avoid
measures that would harm the most vulnerable, and

– an allowance of 1
percent of GDP in additional resources for social safety nets.

The statement which Moody’s following the IMF decision asserting that Latviaâ€™s Baa3 government bond rating – the lowest investment grade, – was being kept at stable was hardly surprising, although the justification they gave – that the bond issuance was supported by â€œsignificant, extraordinary fiscal assistanceâ€ from international lenders – surely was significant, and very much to the point. The EU Commission and the IMF are now guaranteeing and in order to do this have effectively assumed sovereign responsibility fo the country (see Appendix below).

Moody’s were also a little more optimistic than S&Ps on government debt, since they estimated it would only rise to about 60 percent of gross domestic product in 2010 and fluctuate from about 60 percent to 65 percent over the medium term. I think this is too optimistic, basically for the sort of reasons S&Ps are giving. On the other hand they did also state that a currency devaluation, while not being their central scenario, “was a clear risk, along with additional problems in the banking sector”. 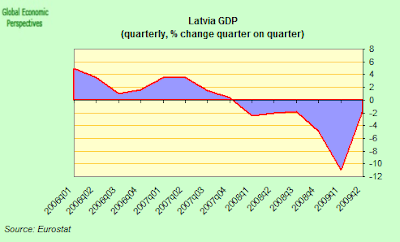 If we now come to the future, we have to note there is little hard evidence at this point for any real recovery – nor should we expect to see any. Industrial output is still falling, and was down 1.4 percent in July over June, and 17.7% year-on-year (over July 2008). This compared with a 18.5% annual fall in the previous month. 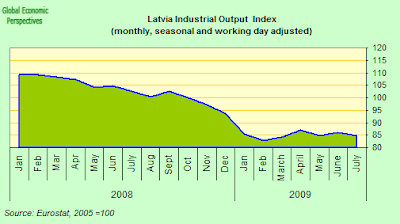 Latvia’s industrial output started falling in February 2008, and has now fallen 22.4% from it peak. 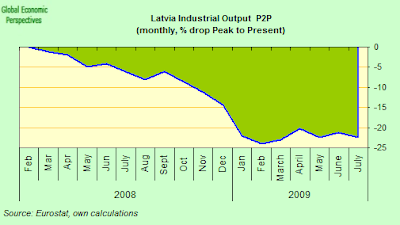 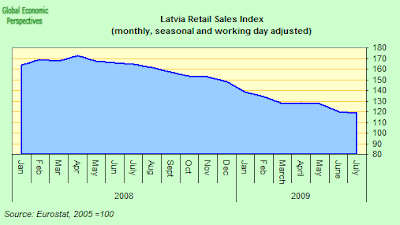 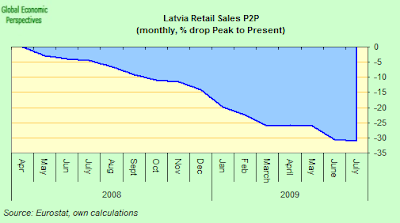 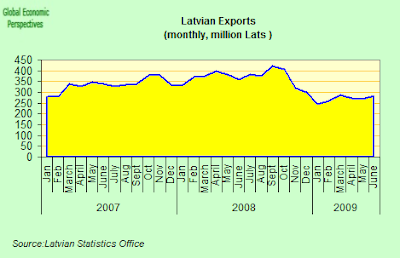 The Trade Defict Widens in July As Exports Drop Back

Latvia’s July trade deficit was 95.2 million Lati up from 67 million Lati in June. This was the first increase since December 2008. Latvian foreign trade turnover came in at 613.3 mln lats in July, down by 3.8% or 24.5 mln lats in current price terms than a month earlier and and down by 41.1% over July last year. 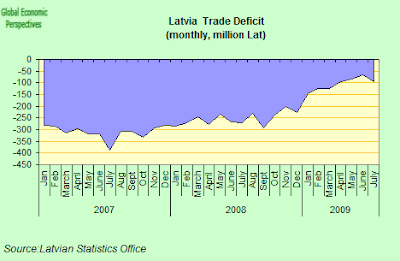 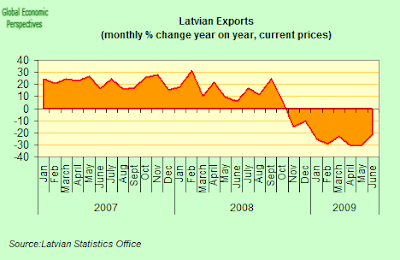 Unemployment Continues To Rise, And As It Does Bad Loans Pile Up In the Banking Sector

Latvia’s unemployment rate hit 17.4% in July according to Eurostat data, and again this was the second highest level in the European Union (after Spain). Naturally with unemployment rising to such levels the number of distressed loans continues to rise and bad debt provisions in the banking sector wnet up again – to 6.6 percent of the total credit portfolio in July from 6.1 percent the month before, according to credit supervisor FKTK.

Lending was again down, and the total credit portfolio fell by 0.7 percent in July. The level of debts with delayed payments of more than 90 days rose to 13 percent of the credit portfolio from 12 percent at the end of June. 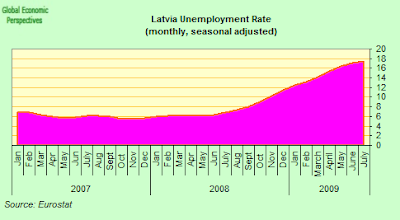 What About The Internal Devaluation, Is It Working?

Well, prices have started falling, and the consumer price level was down in August by 1.0% compared to July. The average prices of goods fell by 1.3%, and of services by 0.4%. But if we compared to August 2008 we find that consumer prices (as measured on the Latvian national index) have incredibly still increased by 1.8% (down admitdely from the 2.5% rate of increase in July), which leads me to ask, given the pain that all of this is evidently causing, are prices still falling too little and too late to do any real good. 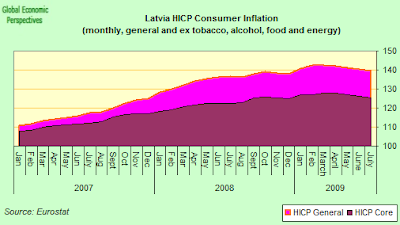 The central bank seems to think the process is working, since they point out on their website that the real effective exchange rate of the lat, which is one measure of the price competitiveness of Latvian goods versus those of the country’s major trading partners, improved between April and July, marking the first four-month gain since the beginning of 2005. We need to remember howvere that the REER index showed prices developing far faster than trading partners all the way from 2006 through to April 2009 (see comparative chart with Finland below) so there really is a long long way back down to go. And if we look at the chart immmediately below, we will see that while the gap is closing Latvian prices are still in a worse position in August 2009 (as compared to other Eurozone countries) than they were in August 2008 – that is over the last year as a whole the position has even deteriorated. 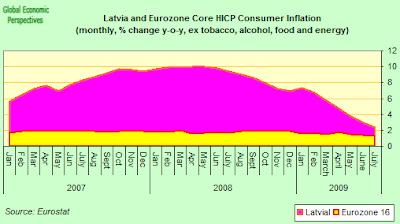 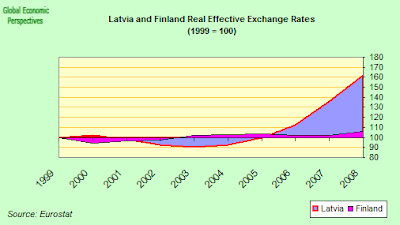 A similar picture can be found in producer (factory gate) prices, which have only recently moved into negative territory on an annual basis. To get a comparison, German producer prices were down 7.8% year on year in July, while 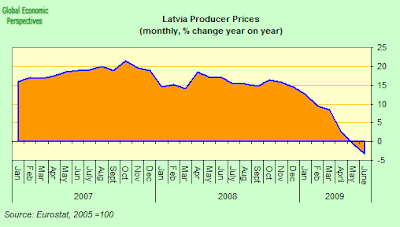 In fact, while export prices are dropping substantially, import prices are also falling (see chart), and thus the real rate of price correction is still quite small.

I therefore contend that this weeks statement from Unicredit Group Chief Economist Marco Annunziata to the effect that, â€œFor the region as a whole and for Latvia, we have gone through the worst,â€ is way too premature. Conditions are not improving, and as Moody’s suggested pressures in the banking system are still building up. It is an open empirical question at this point whether we have the worst behind us. Even over a longer term horizon it is hard to see the grounds for optimism, since there are certainly no “green sprouts” to be seen on the new babies front, with year on year three month moving average being stuck around the 8% drop level. This depression is going to cast a long shadow over the future of the Latvian people, let’s hope for everyone’s sake that all those responsible (the government, the IMF, and the EU Commission) are fully aware of their hsitoric responsibilities here. 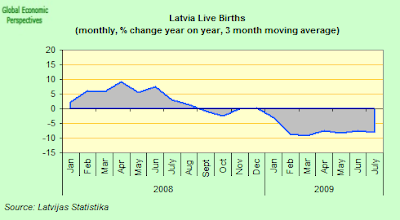 Appendix: IMF and EU Conditions from the respective Letters of Intent.

According to the letter of intent signed by the Latvian Government, The Central Bank and the IMF, a number of new reporting obligations were agreed to. These include:

The Letter of Intent follows the earlier signing of a Supplementary Memorandum of Understanding between the Latvian government and the European Union. The terms of this understanding contained the following Monitoring and Reporting protocols.