Some comments or, perhaps better, some additions to Ed Hughâ€™s piece of February 26, To Soon To Cry â€œVictoryâ€ on Latvia?, by Morten Hansen, Stockholm School of Economics in Riga.

Thanks a lot to Ed for welcoming some comments/further arguments on the debate on whether Latvia can indeed cry â€œVictoryâ€ (as seemingly suggested by Edward Lucas in The Economist) in the internal devaluation battle that it is fighting.

I am too smart (or too timidâ€¦) to declare either side a winner at the moment but for those who might be interested I would like to present some more data as fuel for the debate. Furthermore, at the end, I allow myself just a couple of reflections on the Latvian strategy.

Ed argues that the â€œinternal devaluation is only working at a hellishly slow paceâ€ by referring to the development in CPI inflation. I donâ€™t find CPI inflation a very useful measure in this context since it contains a lot of imported goods and non-traded services neither of which are important for competitiveness. Should I use it nevertheless it would be to say that the change from high inflation to deflation has been quite fast. Inflation topped at 17.9% in May 2008, now it is -3.1% (January 2010) i.e. a 21 percentage point decline over 20 months. This speaks of some, albeit chaotic, flexibility. 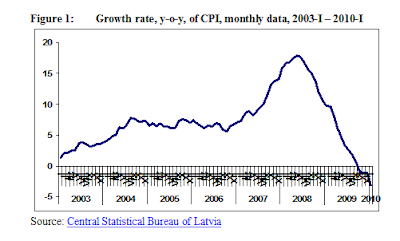 Ed is not too happy about the wage development (â€œâ€¦ and what deep cuts in wages and salaries?â€) either and here I somehow have to agree. Wage growth has indeed entered negative territory, see Figure 2.

As wage data here can at times be dodgy it is good to look at several series and more pronounced decreases are found if one uses the total wage bill from GDP data and compare it to employment. Both series are dramatically down but wages more so, leading to significant decreases in wage compensation per employee and thus speaking well of the internal devaluation, see Figure 3. 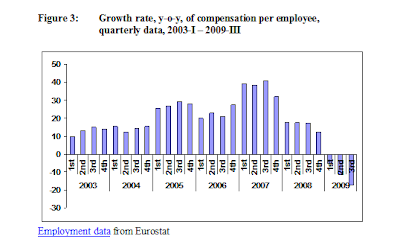 But when splitting the overall development in wages from Figure 2 into public and private sector developments the picture changes quite a bit back again, see Figure 4. In particular the very latest data (2 March 2010) show that the by far biggest wage decreases have taken place in the public sector â€“ good for the public finances and the IMF-EU package but irrelevant for competitiveness and should be a matter of concern. 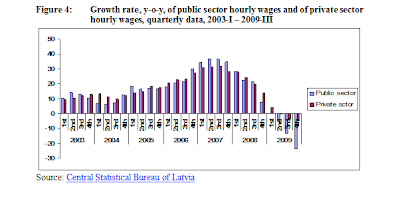 Swinging the pendulum once again one might look at export unit values. To the extent that one will accept it as an index for export prices recent data suggests that Latvia should have regained quite a bit of competitiveness via falling export unit values throughout 2009, see Figure 5. 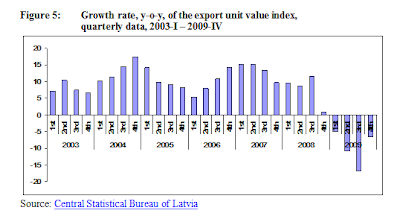 Altogether still a mixed but more nuanced picture and one thing is still in the cards: Figures 1, 2, 3 and 4 seem to suggest gaining momentum. It will be interesting to see if that continues.

Summing up, I think it is premature to just dismiss the internal devaluation; on the other hand, declaring victory now would sound a bit too much like George Bush and his â€œmission accomplishedâ€ speech.

So why not just devalue? Many certainly put blame on the fixed exchange rate e.g. Paul Krugman in his recent â€˜Riga Mortisâ€™ blog* as well as here but perhaps he provides the answer himself by his statement â€˜Latvia is the new Argentinaâ€™ (video link, opens after 10 seconds of commercials). What if a controlled and credible devaluation** is not possible but turns into an Argentinian-style collapse? In all three Baltic countries devaluation, rightly or wrongly, is seen as Pandoraâ€™s Box size XXXL and rapid euro introduction is seen, again rightly or wrongly, as an entry ticket to monetary Nirvana.

And the internal adjustment does reflect the economic policy instruments available when in the eurozone â€“ it will all be fiscal. If Latvia cannot do it now then how will Greece or Spain ever accomplish internal devaluation? And if it is impossible/too lengthy then EMU was perhaps a wrong concoction in the first place?

Whatever strategy is chosen it should see â€˜good implementationâ€™. This has lacked in certain aspects with respect to the internal devaluation in Latvia:

1. Implementation was delayed for too long after signing the Stand-By agreement in December 2008.

2. There are examples of cheating â€“ wage cuts being based on non-implemented wage increases.

3. Uneven distribution of cuts â€“ a hacker calling himself Neo (who must have seen the movie Matrix a few times too manyâ€¦) managed to hack more than seven million files from the State Revenue Service (the local IRS) showing that some in the public or semi-public sector have had just tiny if any pay cuts.

And it remains to be seen a) if the correction needed is too big to accomplish and b) if it is fast enough.

But external devaluations tend to be messy, too, donâ€™t they? Overshooting, collapse, contagion.

Those favouring an external devaluation should present a way in which this is done credibly and how to address the very likely contagion effects in the Baltics, all of this to ensure an orderly devaluation process.

But I havenâ€™t seen such a suggestion.

** A little example: Most people here have multi-currency accounts; my own very simple account allows me with my computer and mouse to shift between 17 different currencies. Perhaps a â€˜click-runâ€™ or virtual run on the currency might be possible?

26 thoughts on “Latvia: No victory yet, no defeat either”