Paul Krugman, Nobel Prize winner in economics 2008, when in need of the antithesis of a role model for economic policy often chooses Latvia. He has been very critical of the insistence of the authorities to maintain the fixed exchange rate when the country faces recession and double-digit unemployment and of course he has a point. For me it is still not clear that the strategy of internal devaluation is better than an external one although I (still, especially if the authorities support it with reform-friendly 2011 and 2012 budgets) support the former. His Riga Mortis piece was fun but this post from 17 December 2010 lacks balance, I think, and certainly deserves some comment. Not to defend Latvia â€“ the reckless boom-time ultra-procyclical fiscal policy in particular is very much the culprit of the current woes as I have argued previously (**) and its effects rightly produces comments and interest from Prof. Krugman and many others.

Prof. Krugmanâ€™s 17 December piece compares Latvia with Iceland. Facing banking crisis and recession Iceland let its currency, the krona/kronur, depreciate in order to increase export competitiveness to stimulate economic activity. The kronur was trading at around 92 ISK/EUR in 2006-07, increasing (depreciating) slightly in 2008 to some 120 ISK/EUR, to 160-180 ISK/EUR in 2009 while it has appreciated somewhat in 2010 and currently stands at 153 ISK/EUR. Check for details here. All in all a pretty substantial depreciation of about 40% of the Icelandic currency between 2007 and 2010. To the extent this has helped export competitiveness (which I am certain it has) it should have softened the blow to the economy from the banking crisis and resulted in a lower GDP fall â€“ which is exactly what Prof. Krugmanâ€™s graph shows. Conclusion: Icelanders are smart, while the internal devaluation will soon have reduced the Latvian economy to nothing, a desert. Hm!

Allow me a similar graph below, only with a different starting point. 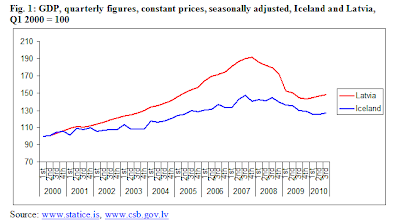 It is old news that Latviaâ€™s economy grew rapidly in the early parts of this decade and it was not due to particularly smart policy; rather it was a consequence of catching up (and some OK policy, trueâ€¦). Iceland is rich, Latvia is poor and thus has potential for catching up.

And the fall of the Latvian economy is indeed spectacular and is the reason for receiving so much attention from abroad: From peak to trough, Q4 2007 to Q4 2009, GDP fell an accumulated 25.1%, the highest, wellâ€¦, anywhere. Similarly, Icelandâ€™s economy lost 13.5% of GDP between Q3 2008 (the recession started later) and Q2 2010, thus just over half the loss of Latvia.

But I think two more points should be noted. Firstly, the time from peak to trough in Latvia was eight quarters while in Iceland seven quarters, thus roughly the same amount of time and it would be stretching it quite a bit if someone were to say that currency depreciation speeded up recovery (Note: Such a point hasnâ€™t been made by Prof. Krugman but it often surfaces). Secondly, at the low point, Q4 2009, Latviaâ€™s GDP had reached the level of Q4 2004 â€“ one could say that the economy had been â€œbombed backâ€ five years. This is actually also exactly what happened in Iceland: At the bottom, Q2 2010, the economy had the same size as Q1/Q2 2005.

Different currency regimes, similar performance: Both countries saw GDP decline for about two years, both countries saw GDP bombed back five years. Latviaâ€™s cumulative fall was bigger than Icelandâ€™s because its previous growth had been similarly bigger as is of course easily visible from the graph above.

But was Icelandâ€™s much smaller GDP decline really driven by exports due to a more competitive currency? Everything is in the eye of the beholder but the graph below does not exactly portray a lean, mean, Icelandic export machine. True, 2009 saw diverging export performances, possibly due to currency depreciation in Iceland â€“ but then one can just as well argue that by 2010 the internal devaluation has started to work in Latvia (please see Fig. 3***) where exports are up 15.5% y-o-y (Q3 2010 over Q3 2009) while in Iceland they are down 2.1%. 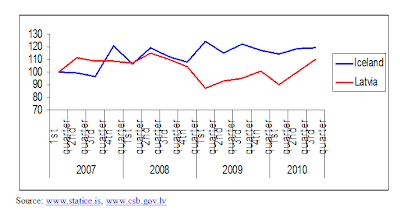 Note: Seasonally adjusted data for Iceland but not for Latvia but the picture should be clear nevertheless. 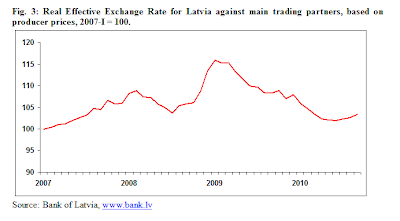 Perhaps capacity constraints are at play in Iceland (see The Economist, 18 December 2010, p. 127-8, European edition) but similar problems exist in Latvia a) due to underinvestment during the crisis and b), perversely, in the face of 18% unemployment, lack of qualified labour and this leads me to my next point here.

As Prof. Krugman points out in yet another post, on 21 December 2010, Latvia has seen a much bigger decline in employment than e.g. Iceland. Very true and very sad but â€“ even more sadly â€“ not that strange either. Low unemployment is an anomaly in Latvia, not high unemployment as I have pointed out here. In 2007, at the height of the boom, this ECFIN Economic Brief estimated Latvian GDP at no less than 16% above the level consistent with full employment, a degree of overheating best described as sizzling. Unemployment reached 5.4% at its lowest point, a point way, way below the uncomfortably high equilibrium level. Or to put it simply: Any return to normality would have implied a huge drop in employment, no matter what.

It is easy to ridicule Latvia for its massive GDP decline and huge fall in employment but a more balanced analysis would see this partly as the result of the preceding rapid increases in GDP and employment â€“ from boom through bust the numbers have always been more extreme here and this little entry just tries to argue that the magnitude of the current decline is very much a function of the size of the preceding boom.

And my last point. I have tried to argue that the very different exchange rate policy seemingly hasnâ€™t produced that different an impact on exports in the two countries but the fiscal policy response certainly was different, see graph below. 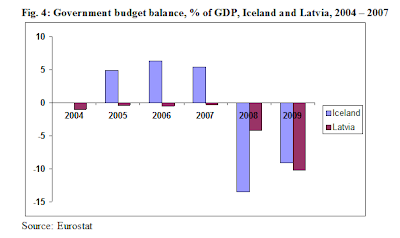 Whereas Iceland went into surplus during its overheating period (unemployment hit 0.8% at its lowest), Latvia kept recording budget deficits despite the EUâ€™s highest growth rates, despite ultra-low unemployment, despite severe overheating and despite massive increases in tax revenue. In short, Latviaâ€™s fiscal policy was highly procyclical during the boom (Bank of Latvia estimates that 2007 saw a structural deficit (i.e. adjusted for employment being above its equilibrium value) of some 8% of GDP), thus adding to the size of the boom whereas Iceland pursued a more countercyclical fiscal policy, helping to smooth somewhat the economic cycle.

When the crisis struck Iceland moved into a massive deficit, thus continuing its countercyclical fiscal policy while Latvia, unable at the end of 2008 to borrow from anyone anywhere except from the IMF and EU, was forced to continue its procyclical policy (a budget deficit of 10.2% reflects very tight policy when the economy contracts 18% as it did in 2009), once again exacerbating the business cycle but this time on the way down. Latvian public finances â€“ expenditure and revenue â€“ were just â€˜out of syncâ€™ with fundamentals during the boom and had to be addressed at some stage. It hurts and hurts badly to do so during a recession but the political will did not materialize before.

I have tried to argue that I am not so convinced about the relative success of Iceland coming mainly from currency depreciation. Data does not seem to support that. But will the Icelandic currency depreciation ultimately be more successful than the Latvian internal devaluation? Perhaps, but I donâ€™t see conclusive evidence yet.

I put more faith in the strongly procyclical fiscal policy of the boom times in Latvia as a culprit â€“ it exacerbated the boom on the way up and it exacerbates the bust on the way down â€“ plus a sort of â€˜inevitabilityâ€™: By 2007, with GDP operating some 16% above its full employment level and with unemployment several percentage points below its natural rate, the economy simply had to suffer a major GDP decline when the financial crisis struck.

This is not to say that Latvia is a â€˜successâ€™ or a â€˜role modelâ€™. Some future text books might add an appendix about Latvia of successful internal devaluation during a recession but then they should also add one on reckless fiscal policy during a boom.

* Jimmy Cliff, 1972. I personally donâ€™t particularly like that song but the title is brilliant when describing the Latvian economic performance in the first decade of this millennium.

** There are several such measures but they all point in the same direction: Some regaining of competitiveness from 2009. I am not trying, however, to address whether the LVL is overvalued or not.