Well, this is certainly not the first time I have had cause to complain about the quality of the journalism and economic reporting served up over at the Economist, and I’m damn sure it won’t be the last. But this latest example of shoddy (I would almost even go so far as to use the word “gutter”) journalism certainly takes the biscuit. Catalunya, the august magazine informs its readers is the “Land of the Ban” – “First the burqa, now the bullfight. What will Catalonia outlaw next?” Evidently the author of the article is entitled to his opinion, but could it be that the long-standing practice of incorporating unsigned opinion pieces may now have lost its earlier justification, and may it not somehow have inadvertently converted itself into a rather cowardly way of expressing otherwise hard to justify opinions behind the safe shield of anonymity. Or would our author really like to show us that valour is, at least in this case, the better part of discretion, and enter the arena in persona in order to face the wrath of the Catalan bull?

â€œThe bullfight is not a sport in the Anglo-Saxon sense of the word,â€ wrote Hemingway in his classic treatise Death in the Afternoon, â€œthat is, it is not an equal contest, or an attempt at an equal contest between a bull and a man. Rather, it is a tragedy; the death of the bull, which is played, more or less well, by the bull and the man involved, and in which there is danger for the man, but certain death for the animal.â€

One Bridge Too Far?

As I say, this is not the first occasion on which I have felt moved to take The Economist to task for the level and standard of its journalism. Central European Correspondent Edward Lucas’s heartfelt stance in defence of the Estonian internal devaluation is not a justification for innacurate reporting of developments in the region I argued here (see The Economist Blog reply here), nor indeed is the India correspondent’s taste for ever stronger versions of Vindaloo curry good grounds for revising upwards trend growth in India every two months (as I argued here, see also this excellent earlier piece by Nandan Desai debunking what appeared – at the time – to be inbuilt prejudices against recognising India’s inherent growth potential). And then we have the case of their Science and Technology correspondent, who enthusiastically latched onto what in the cold light of day appears to have been a deeply methodologically flawed piece of research trying to show (contrary to conventional wisdom) that as the level of human well-being increased beyond a certain point, then fertility begins to rebound.

Normally, in fact, what I have expressed reservations about in the Economist’s way of looking at things is their strong micro- (versus macro-) bias in terms of analysis, their preference for supply side rather than demand side considerations (how the hell are longer shopping hours in Germany really supposed to correct deep structural deficiencies in German domestic demand), and a general underplaying of the role of demographic factors in economic growth processes.

But as I say, all these are issues about which it is perfectly possible to have an ongoing debate. But quite how it is possible to have a debate about the following – Cataloniaâ€™s regional parliament outlawed bullfighting. It is a bit like a German state banning wurst or a French region condemning those pesky berets – it is hard for me to see, since it is not clear what the debate is intended to be about. As one (Female, Argentinian living in Italy) reader of my Facebook page commented:

“Bullfighting, burqa and Wurst, all in the same first paragraph? I cannot agree with this kind of oversimplification, either as a woman, as a European, as a mere reader with a bit of basic education. The article is unfortunately misleading. The complex debate on the burqa should not be instrumentalised as part of an argument against banning the killing of animals for the sole aim of entertainment. Spain as a whole is getting there, so please be fair to the Catalans and to the many Spaniards who consider the corrida a cruel relique of the past.”

As I say, I am hard pressed reading the article to discover what the issue is, apart from an apparent distaste for Catalonia, and the Catalans. I had thought it might have been about the omnipresence of a “nanny state”, but then I read in this very much more balanced New York Times piece, that:

So in fact, we learn that bullfighting is losing support across Spain, and only survives thanks to government support, and mightn’t we have imagined that The Economist would be worrying itself about whether such spending is entirely justified in such troubled economic times as these. Not a word on that though.

Or maybe their correspondent is concerned about loss of tradition. Certainly, in his article of Bulls and Ballots – where our author tries to muddy the debate between bull fighting and popular ballots about self determination (a constant theme here I think) – he makes the incredible statement “Never mind that Cataloniaâ€™s own traditions involve similar torments for the hapless animals”, which suggests it is this loss of tradition he is worried about. But then why not be really consistent, and campaign for the reintroduction from clandestinity of ancient English traditions like bare knuckle boxing: 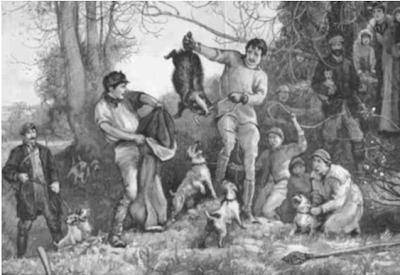 At the same time it is hard not to notice that the correspondent does his best not to find too many positive things to say about Catalans. In an article back in July 2009 “All must have prizes“, he also argues that one of the reasons for Mr Zapatero’s continuing spending spree was to keep Catalan politicians happy, without mentioning – as the group of young professionals who form Collectiu Emma point out – that there is a net fiscal transfer annually from Catalunya to the rest of Spain of around 10% of GDP. Indeed trying to hold Catalonia responsible for Spain’s economic woes makes about as much (and as little) sense as holding Germany responsible for the Greek economic mess. In fact, the comparison goes further, since it is reasonably clear that Catalonia has an external surplus with the rest of the world just like Germany does, which is why the Catalans share the same kind of reputation inside Spain for being thrifty and austere as their German counterparts on the European level.

Diversity Sensitivity Or Canaries In The Coalmine?

But moving rather further afield, it would seem that the US press in general have been rather more balanced in their assessment of the situation than their UK equivalents. I have already mentioned the New York Times, but there are also reasonable summaries in the LA Times, the Christian Science Monitor and the Wall Street Journal. CNN even published an Op-ed from Prou activist Jordi Casamitjana.

Indeed, as this piece in the LA Times highlights, “Catalonia is the second Spanish region to outlaw bullfights, which have long been decried as cruel by animal advocates. The Canary Islands banned the blood sport in 1991, but Catalonia is the first region on the Spanish mainland to do so”.

In fact you have to go to Bloomberg (incredible isn’t it) to learn that:

“The Canary Islands banned bullfighting in 1991 as part of a wider law that aimed to protect domestic animals, singling out a ban on dog fights and the phasing out of cock fights”.

So in the Canary Island case it wasn’t part of an effort to defend their regional identity, which is, incidentally, reasonably clearly established.

In comparison with their trans Atlantic colleagues the British contingent has fared notably worse. According to Robert Elms writing in the Independent, “End bullfighting and you give in to the neutering forces of accepted taste”. since “Our squeamishness means that we prefer death which is mechanical and invisible, while the Spanish understand that it is part of a cycle”. Personally, I have never read such tosh, and have no idea on which planet this person is currently living.

Or then there is Gerald Warner who writes in his Telegraph blog – in an article entitled “Decent British revulsion towards bullfighting, in the land of the lunchtime abortion” (a *must* read this post)- “Nevertheless, post-Blair Britain will never be rated the most hypocritical and materialist society on earth so long as there are Catalans to claim those laurels.” Really you have to give it to Gerald, he has far more Spanish “cojones” than the Economist writer, since he is at least prepared to recognise that those “wishy washy” modern British are half way along the road to that Catalan end-state.

And then there is Giles Tremlett writing in the Guardian

“The local El PeriÃ³dico newspaper reported that several nationalist deputies had decided to back the ban only after Spain’s constitutional court struck down parts of the region’s 2006 autonomy charter earlier this month. At least 430,000 people, or 6% of all Catalans, protested on 10 July in Barcelona against the court’s decision ,which declared Catalonia was not legally a nation.”

There we go again, this attempt to tie in people’s feelings about animal sports, with the Catalan Statute argument (remember the Of Bulls and Ballots piece). Of course, this connection exists, but it is a little odd to base your argument on one small report in a (not unbiased) local newspaper. Which brings us to another interesting point. Is the Giles Tremlett who wrote the above referenced Guardian piece the same Giles Tremlett who regularly writes on Spanish political issues for the Economist? And did he actually write the Economist piece I am bitterly complaining about here – which would be strange to discover, since the Guardian piece is considerably less rabid)? Perhaps only Giles himself can tell us that.

Is It Closing Time In The Bullrings Of The West?

So what really is all the fuss about? The threat of Catalan secession from Spain (highly improbable at this point) or the danger that is posed to this highly subsidized form of entertainment from having two autonomous communities now refuse to accept it? Evidently many Spaniards now reject what many would foist upon them as their national heritage (more on this here).

“According to a poll published in the Spanish daily El Pais this weekend, “Most Spaniards do not like the centuries-old spectacle of bullfighting but also do not believe it should be banned…..In a poll of 500 people conducted by Metroscopia, 60 percent said they did not enjoy bullfighting though 57 percent said they disagreed with the move by the parliament of the northern Spanish region to ban it.”

In fairness, not all the UK press was of one voice. There was an excellent piece by Colm TÃ³ibÃ­n in the Guardian and maybe this would be a good point to end on:

“The crowd loved it. It was a useful experience learning that people in groups, without laws or limits …set to govern their appetites, will have a great time watching some dumb and beautiful animal, who has no chance of escape, being cut open with swords and other sharp instruments. They can call it sport, they can call it tradition, they can write about its beauty, its poetry and its intricacy, they can invoke Hemingway and write about skill and ritual; for me that day the bullfight was a celebration of cruelty, of mob rule, of death, of picking on something weaker then you and amusing yourself at its expense. It was vile and it was disturbing.”

Plagiarising the words of Brendan Behan, “the bells of hell go ting aling aling, for the Economist’s Spain correspondent perhaps, but no more for the Catalan bull”.

20 thoughts on “Just What Is The Economist Up To In It’s Seeming Crusade Against Catalunya?”