According to data released today (Monday) by the Swedish statistical office Sweden unexpectedly fell back into recession in the fourth quarter, adding to the impression there has been a growth dip among Europe’s economies and raising further questions about the durability of the recovery in Europe.

Gross domestic product contracted by a seasonally adjusted 0.6 per cent in the fourth quarter of 2009 (when compared with the previous three months), despite analyst expectations for growth of 0.3 per cent. In addition the third-quarter figure was revised to a 0.1 per cent quarterly decline (down from an original 0.2 per cent gain) which means that Sweden is now back in recession. 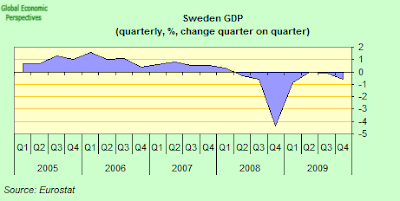 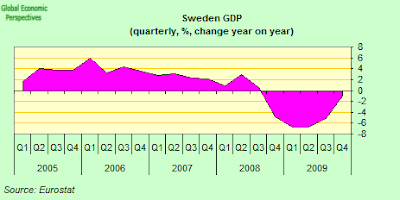 Exports seem to be a big part of the problem, despite the earlier devaluation in the Krona. In this sense my earlier optimism was misplaced. 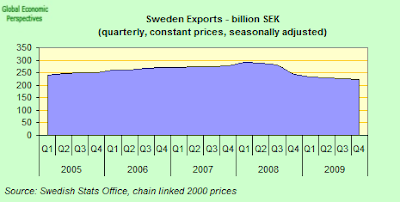 In fact, exports have fallen in every quarter since the start of the long contraction. 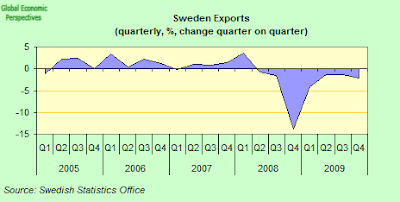 Indeed, far from this expansion being export-lead, it is household and government consumption which have been the positive components in growth. Capital investment is still contracting, as it is almost everywhere in Europe, which is one of the obvious weaknesses in the recovery.

But I say “what is going on” in my title, since I am at this very moment going through all the February Purchasing Managers Index (PMI) results, and Sweden has come in, for the second month running, as the global leader, with a reading of 61.5, which in theory suggests a strong expansion in the manufacturing sector. But it isn’t only the January and February 2010 data which have been strong, if you look at the PMI chart (below) in theory Swedish manufacturing has been expanding since June last year. 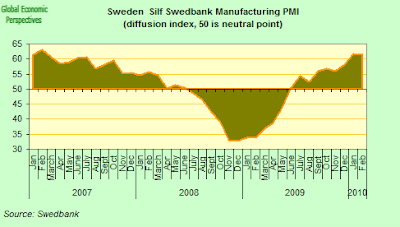 Yet if we come to look at the manufacturing output data as supplied to Eurostat, there is no sign whatever of any sort of recovery in Swedish manufacturing. Really I think SILF/Swedbank owe us all some sort of explanation for this state of affairs, since at the very least something must be way out of line in their methodology. And please note, this survey is NOT produced by Markit economics, whose PMIs are normally far more reliable. 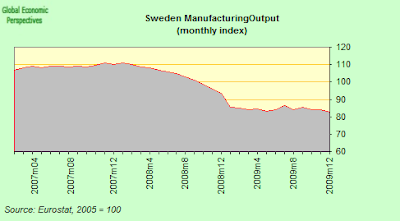 4 thoughts on “Just What Is Going On In Sweden?”