Germany’s economy continued to contract in January, and even more rapidly (slightly) than in December, according to the latest flash estimates for the Markit PMI.

The estimates showed that the composite Markit purchasing managers’ index (PMI) fell to 38.0 from December’s final 39.5 reading. Any reading below 50 means contraction from one month to the next, so what this means is that the German economy was contracting more rapidly in January. Taken together, the surveys of the manufacturing and service sector showed business activity shrinking at its fastest pace since the composite PMI series began in January 1998. A 38 reading on the monthly PMI is probably equivalent to something in the order of a 10% annual rate of GDP contraction (or a 2.5% quarter on quarter drop), which is, well, massive. Nor does this seem unreasonable, since on initial estimates it seems that German GDP contracted by 2% in Q3 2008 over Q2, which is an 8% annual rate of contraction. Whichever way you look at it, these numbers are very large.

“There are really no signs of any let up in the retrenchment in global markets. So I think the outlook remains very bleak and that Germany will continue to suffer throughout the first half of the year,” said Chris Williamson, Markit’s chief economist.

The heavy dependence of the German economy on exports means that as demand has fallen back elsewhere so has German economic activity. Exports fell by an unprecedented 10.6 percent month on month in November and according to an Economy Ministry official on Wednesday they fell by another 10-11 percent in December. Again, these are very large numbers in economic activity terms.

The Markit flash manufacturing sector PMI fell in January to its lowest level since that survey began in April 1996, to 32.0 from December’s 32.7. The sub-index measuring current manufacturing output also fell to a series low of 27.5, from 29.6. 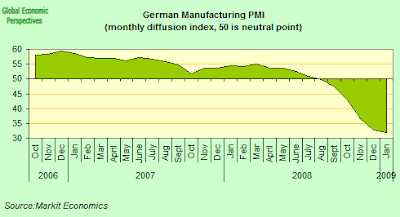 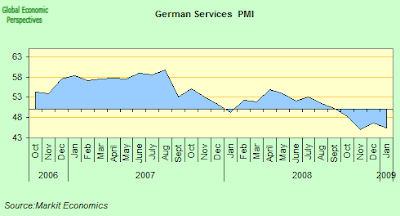 The government said on Wednesday it expected the German economy, Europe’s largest, to contract by 2.25 percent this year, revising down a projection it made last October for growth of 0.2 percent. Since World War Two, the German economy has not contracted by more than 1 percent in a year.

The estimate for the composite PMI for all 16 nations sharing the euro improved very slightly, since the reading ticked up to 38.5 points in January from a record low of 38.2 in December, but again, in GDP terms this means that the whole zone is currently still contracting at an annual rate of somewhere in the region of 10%! So this is very cold comfort stuff I feel, especially when you take into account the margin of error in a flash estimate.

Despite expressing the view that â€œThe year 2009 will be very difficult,â€ European Central Bank President Jean- Claude Trichet has indicated that the ECB is unlikely to cut interest rates further in February, and the next meeting when they may cut interest rates again will be in March.