It all started as an idle conversation in the loo. The next thing The National Bank of Hungary (NBH) and the Hungary’s Financial Supervisory Authority (PSZÃF) had to come out in public to declare that they were closely monitoring the status of the financial system, adding that from what they could see from their monitoring the Hungarian banking system is sound, and depositors’ money safe.

The problem was not the loose talk in the lavatory (at the Hungarian Banking Association apparently) but the fact that that august body then sent out a letter, warning its members about the existence of â€œgroundless rumours” that banks were planning to freeze deposits on 13 March. Possibly this is the quickest way to start a run on bank deposits known to humankind.

Hence the PSZAF and the NBH had to stop in and stop the rot. As Portfolio Hungary point out, this is now the third time in a week that something inane has happened (first there was Prime Minister GyurcsÃ¡ny’s press conference in Brussels, then there was the joint declaration of bank regulators (which excluded Hungary) and now this. No wonder the forint dropped to a record low of 317.22 per euro today. Yields on Hungary’s government securities also shot up today, especially at longer maturities in trading which Portfolio Hungary described as “non existant”. According to Government Debt Management Agency (ÃKK) data, yields on the 3-yr benchmark leaped by 69 basis points to 14.35%; the 5-yr benchmark yield went to 13.44% and an 80-bp increase took the the 10-yr bond to 12.74%. The point here is that Hungary is looking at a 5% GDP contraction this year, and with yields like this we are evidently heading for no good place next year as well. What Hungary needs is some kind of external support that can break this whole dynamic, otherwise there is no only one way this can end. Is anyone listening there?

More theatricality was addded when TamÃ¡s BÃ¡nfi, who is a member of the National Bank’s Monetary Council, came out and said that sovereign default was not an option, when you are reduced to saying this things are getting bad. I mean, did anyone in Hungary seriously think it was?

â€œThere will be no sovereign default in Hungary because it cannot be allowed. It must be thwarted by policymakers and they do have the instruments that have a transitional or lasting effect in this regard,” BÃ¡nfi, a member of the central bank’s (NBH) rate-setting body, told local daily NÃ©pszava in an interview on Friday.

And BÃ¡nfi is not the only one to be trying to reassure here, since Government Debt Management Agency Deputy CEO LÃ¡szlÃ³ AndrÃ¡s BorbÃ©ly was out doing it yesterday. “Hungary is not threatened by sovereign default either in the short or the long term”, he said “partly thanks to the continuity of government securities issuances and partly because of the major international credit facility.”

And this is undoubtedly true. The government can continue to borrow money, but can it ever pay it back, this is the real question. As if in response CDS’s went heading on upwards today, and Hungary’s 5-year CDS spread rose to a new all-time high of 619.9 basis points, up from Thursday’s close of 618.6 bps and considerably above the earlier record high set at 605 bps during last October’s financial crisis. The point is with selling bonds getting more expensive, insuring debt costing more, and the economy contracting, it is hard to see how you can square the circle here.

Especially if your industrial output is falling at an annual rate of 21% a year. 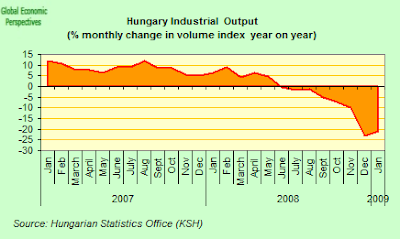 The saddest part about all this is that I have the impression Europe’s leaders have no idea at all how it is Hungary got into this mess, and worse, I doubt they are really going to take the trouble to actually find out.

4 thoughts on “It’s Official, The Hungarian Banking System Is Sound”