This not unreasonable question was asked today by Ralph Atkins on the FT’s Money Supply Blog:

The economic news from Spain has turned more worrisome. Eurozone purchasing managersâ€™ indices for manufacturing showed the regionâ€™s recovery humming along nicely (Decemberâ€™s final index reading at 51.6, up from 51.2 in November, was in line with the preliminary estimate released last month).

But Spain is heading in the opposite direction. Activity in its manufacturing sector continued to fall, and the pace of contraction in the fourth quarter was faster than in the third quarter, according to Markit, which produces the survey. Spainâ€™s manufacturers are also reporting far steeper job losses than in other large eurozone economies, according to Chris Williamson, Markitâ€™s chief economist.

Ralph certainly has a point here. Spain’s December PMI results are shocking, it posted 45.2 in December, just below the 45.3 posted in November, indicating a still substantial rate of contraction. Even more to the point this is the third month running where Spain has turned in the worst reading of any of the 26 countries included in JPMorgan’s Global Manufacturing Survey.

As Andrew Harker, economist at Markit, puts it:

â€œThe December PMI data completes a dreadful year for the Spanish manufacturing sector. Output decreased in each month apart from a marginal rise in July, with demand showing very little sign of recovery. The weakness of demand, amplified by dire labour market conditions in Spain, means that while input costs are rising, firms are forced to continue to offer discounts, further harming margins.â€ 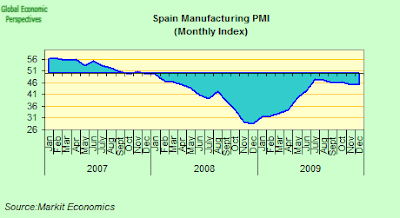 As Ralph points out, Spain’s high unemployment could be one reason why Spanish manufacturing output continues to contract – there is less demand for manufactured consumer products. But this does not explain why Spanish exports are also under-performing the eurozone average. As he says, to understand this you need to understand the competitiveness issue. Spain’s trade deficit has in fact deteriorated rather than improving in recent months, so something somewhere isn’t working. 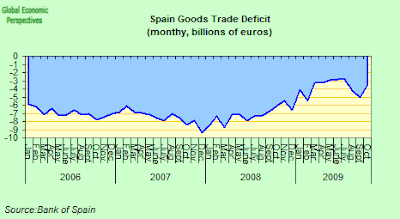 And meanwhile, according to the latest Bank of Spain data, net external debt rose in the third quarter, to 955 billion euros, or just under 90% of GDP.

And the government deficit keeps rising and rising. According to estimates by Julian Callow, Chief European Economist at Barclays Capital, Spain’s general government borrowing requirement in the third quarter was around 33.96 billion euros (or an estimated 13.0% of GDP), up from 31.2 billion in the second quarter (around 11.9% of GDP).Based on this estimated Callow reckons the fiscal deficit to GDP ratio might come out at an average of around 11.5% of GDP for 2009, substantially worse than most estimates (e.g. the OECDâ€™s mid-November estimate of 9.6% of GDP). I largely agree, and have been working on a rule of thumb estimate of 12% of GDP deficit (partly because I think GDP will finally come in lower than expected, and partly because I fear revenue will fall more than anticipated).

And to cap it all (for today) October house sales and new mortgages both fell back sharply from September.Take a good look at the two charts below (the first is the % drop in new mortages constituted from the peak, the second is a three month moving average of new house sales) I’m sure you’ll agree, they have recovery written all over them. 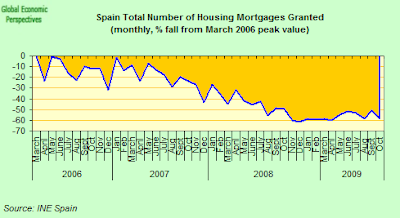 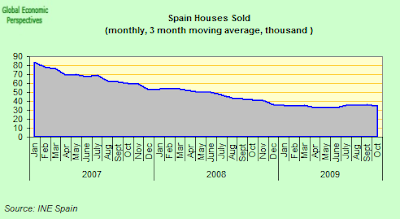 But to come back to Ralph’s initial point, I wouldn’t say that Spain is simply being left behind, it is actually going backwards. And now the screws are really – slowly but steadily – going to start to tighten. The first hint came last week with the announcement that the latest one year Euribor “fixing” had gone upwards for the first time in a year, due to the slow movement upwards of the Eonia inter bank rate (as forecast in this post). So mortgage interest rates are now going up, and it will be a long long time before they start to come down again. Secondly, while almost everyone in the private sector is busy adjusting prices downwards, a whole raft of government and local authority administered prices were raised on 1st January. And then, next July, VAT will also be raised. What all of these three moves have in common is that they are going to scoop domestic demand out of the economy. The first, in the form of interest payments to those who hold Spain’s external debt, and the other two in order to reduce the government fiscal deficit. That is, there will be no growth benefit from any of these moves, quite the contrary, which is why I say, Spain isn’t just being left behind, it is actually travelling backwards.

4 thoughts on “Is Spain Getting Left Behind?”