As Barcelona-based property consultants Aguirre Newman publish a report that suggests Spanish property prices may need to fall by at least 23% for the market to return to any kind of normality, we learn today that Spain’s annual inflation dropped almost a full percentage point to 3.6 percent in October, according to data from the Spanish National Statistics Office. This was the lowest level in a year as energy and food costs fell and the real economy slowed dramatically. October’s figure, in line with estimates, was down from 4.5 percent a month before, but this piece of information obscures more of Spain’s current inflation dynamic than it actually reveals.

The slowdown in inflation over the last few months is evident in the chart below. 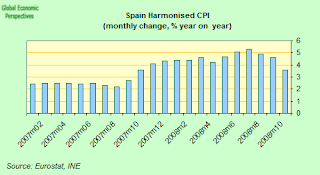 “Headline figures reflect energy and food price falls. The most interesting thing is the substantial drop in core inflation, which is a very clear sign of a more fundamental slowdown in the overall economy,” said Daniel Antonucci, economist at Merrill Lynch.

But this slowdown in annual inflation isn’t the important point, the big news, and the part most analysts seem to be missing, is that the price index peaked in June (as can be seen in the chart below, and whether you measure on the Spain general index or the EU HICP), since which time it has been falling, and from now on (barring the slight possibly of a minor “blip”) it looks like it is going to be downhill all the way. From all the indications we have at present we should be ready for quite a sharp fall in Spanish prices in 2009 (possibly 2-3 percentage points). 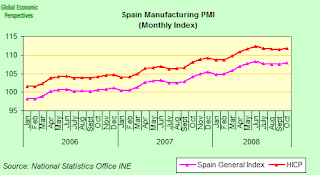 The reasons why we should expect a fall are evident, we are heading for a global recession in 2009, energy and commodity prices will all be y-o-y negative, house prices, rents, factory gate prices etc etc, all look set to fall as profits get squeezed, and wage and salary earnings – if not direct base salaries – also fall. As the headline in newspaper the woman sitting opposite me in the metro this morning was reading said “Rebajas Hasta El Pan” (The “sales discounts” even reach bread).

GDP is about to start shrinking fast: 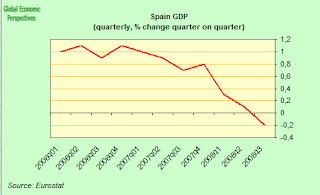 While unemployment is rising at this point almost exponentially: 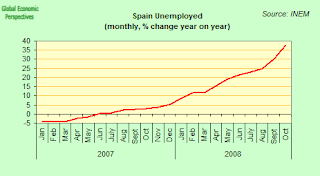 I would say that the practical economics of this situation are now obvious, but for some more general theoretical explanation of why we should now expect to see deflation raising its ugly head across one economy after another see Claus Vistesen’s “The Global Economy â€“ Is Deflation the Next Macro Story?” post. And for more details on the current macro economic background you could try my Spain’s Services PMI Contracts At Record Rate In October

2 thoughts on “Inflation Is Dead In Spain, Fasten Up Your Seat Belts For A Sharp Dose Of Deflation”