According to Secretary of State at the Hungarian Finance Ministry LÃ¡szlÃ³ Keller Hungary will post a public sector deficit of HUF 332.9 billion in the month of March, up from the preliminary forecast of HUF 329.8 bn made only a month ago. At the same time the Finance Ministry has left its full-year deficit projection of HUF 730.6 bn virtually unchanged from the one made a month ago of HUF 729.9 bn. (In fact the entire Q1 deficit is expected to run to HUF 581bn or 2.2% of annual GDP. This seems like a huge chunk of the whole years deficit spent already, but we should remember that there is a strong seasonal component here, and for comparative purposes we could note that the actual deficit for Q1 was HUF 508bn or 1.9% of GDP, so while the situation is not good, it may not be as bad as it seems at first sight).

However, as the months pass the ability of the government to live up to its budget objectives seems more and more remote, despite constant reassurances from Keller that â€œThe cabinet is in control of the situation” and that â€œThe government wants to keep the budget deficit under 3.0% (of GDP) at all costs”.

The root of the problem is that the slowdown in Germany and other customers for Hungary’s exports is much deeper (and likely to be of longer duration) than was originally anticipated. As a result, the Hungarian government’s growth forecast of a 3.0-3.5% contraction this year now looks rather high, with the median estimate of analysts in a Reuters poll published this week suggesting Hungary’s economy will contract by 4.5% in 2009 despite pleas from Keller to â€œstop the race” in who can forecast a bigger economic contraction for Hungary. The most pessimistic prognosis in the current Reuters survey is for a 5.6% fall, and I’d have to admit, despite being reasonably positive about the export potential for the Hungarian economy in the mid term, that from the data I am seeing, the 5% to 5.5% contraction range doesn’t look at all exaggerated.

Data like the fact that January gross wages in Hungary fell by a significant amount – 5.2% year on year. The most important reason for such a drop was a cut in wages in the public sector (bonuses and premiums) where salaries fell by almost a quarter (-23,7%)compared to January 2008. In fact most of this was due to a reduction in earnings rather than basic wages, since basic pay excluding bonuses actually increased by 5.1% (5.8% in private and 3.4% in public sectors). Equally important is the rapid deterioration in purchasing power, since in real terms earnings fell by 6.9% year on year which supports the view that the economy will contract pretty sharply in 2009, and especially given the constraints on government spending resulting from the IMF programme. Equally important is the haemorrhage in jobs from the private sector with employment down by a hefty 3.5% year on year.

And another of these data points comes from the announcement that Hungary’s construction industry output dropped by massive 16% year on year in January 2009, following an almost recovery like rise of 3.7% in the previous month. Even more shocking is the month-on-month number that showed a 13.8% drop, seasonally and working days adjusted numbers. Hungary’s construction sector is now well and truly back in a very deep slump. 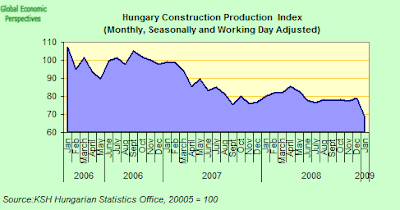 All of which makes Angela Merkel’s statement today that European Union countries that run into a financial crisis can count on international help sound pretty hollow.

â€œWe will help member states that get into a financial emergency,â€ Merkel said today in a speech to the parliament in Berlin before attending an EU summit in Brussels. â€œWe showed that in the cases of Hungary and Latvia. And if it hits other member states, we will do the same”….EU countries in financial straits â€œcan count on our solidarity — weâ€™ve repeatedly made that clear,â€ she said.

Well, as I made clear in this post, the Hungarian economy is not as bad as it is being made out to be in the medium term, although what it now needs more than anything is “incubation”. The current measures can’t work, the 3% deficit is almost unattainable, and more cuts will be counterproductive. What Hungary needs isn’t Balance of Payments assistance, but real economic support. Nice words don’t help here, what we need are facts and deeds. A tragedy is about to happen, it would be more than a pity if it wasn’t averted.