The Hellenic Republic, rated A2/BBB+/BBB+, has mandated Credit Suisse, Deutsche Bank, Eurobank EFG, Goldman Sachs International, Morgan Stanley and National Bank of Greece for its forthcoming Greek Government 5-year Euro benchmark. Due 20 August 2015, the transaction will be launched and priced in the near future subject to market conditions.

And here’s how the ten year bond spread with the comparable German bund performed today. 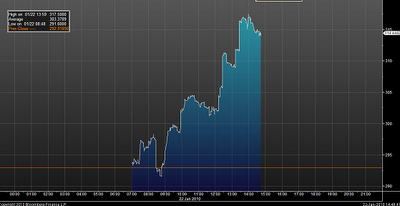 Greek plans to issue new bonds re-ignited concerns over peripheral euro zone sovereign debt on Friday and helped push benchmark German debt futures to a one-month high. The risk attached to Greece’s sovereign debt continued to dominate investor sentiment with the announcement of a syndicated issue of 3-5 billion euros causing Greek 10-year bond yield spreads over German Bunds to widen beyond 300 basis points. “The announcement that Greece are looking to issue five- or 10-years in the near future, albeit in small size, has put the periphery under pressure once again,” said Peter Chatwell, fixed income strategist at Calyon.

Other peripheral sovereigns were again affected by contagion from Greece, with Portuguese 10-year yield spreads over Bunds hitting their widest since early May.

Speaking at a conference in Athens yesterday Miranda Xafa, a prominent Greek economist and an ex Executive Board member at the IMF, said that Greece could well have a difficult time borrowing in April and May, since during these months a total of 22 billlion euros in bonds are set to mature.

â€œThis year, we have a big expiry of bonds in April and May. With the five-year bond from 2005 and the 10-year bond issued in 2000, this concentration of maturing bonds leads to a re-financing risk.â€

â€œThe issue is that slowly, the ECB will start to withdraw its extraordinary measures for obtaining unlimited liquidity, and we will return to the system that was in effect before the crisis. This means Greek banks will have to look for alternative ways of securing liquidity, not through the ECB but through markets. In June, Greek banks will owe 28 billion euros ($39.5 billion) they have borrowed from the ECB, and it is almost certain that the total of this amount cannot be refinanced for more than a few months. If Greeceâ€™s credit rating falls below A- at the end of the year, it will mean that Greek bonds cannot be used as collateral for borrowing from the ECB.â€

4 thoughts on “Half a League Onward Rode the Six Hundred”