Well, as reported over the weekend on this blog, the EU Commission did in fact demand “more sacrifices” from the Greek people, and in the end Prime Minister Papandreou had to make a last minute TV appearance to explain to his incredulous listeners that the time had come “to take brave decisions here in Greece just as other countries in Europe have also taken….We all have a debt and duty towards our homeland to work together at this difficult time to protect our economy.” I thought that that time had come last November, but evidently I was precipitate in my judgement, but now it has finally arrived, although I ould note that hope does spring eternal, and that even now not everyone is 100% convinced.

When Adreas Papandreou said Greece needed the same brave decisions others have taken I presume he was in fact referring to Latvia, Hungary and Romania.

More than the measures themselves, what is interesting about the Brussels acceptance speech were the series of measures put in place to monitor and control Greek economic policy. As the Financial Times put it, the EU puts Athens under close scrutiny.

“The European Commission, the guardian of Europeâ€™s fiscal rules, struck out into uncharted territory by placing Greeceâ€™s economic and budgetary policies under closer surveillance than has yet been applied to a eurozone country.”

In fact the European Commission has put Athens on an unprecedentedly short leash, since there is to be a mid-March interim progress report, a further one in mid-May, and quarterly updates thereafter. In addition, an infringement procedure was also launched against Athens for “failing in its duty to report reliable budgetary statistics”.

The Commission recommendations will now be forwarded to EU finance ministers for possible approval on 15-16 February. If endorsed, it will be the first time that a eurozone member country will be put under such strict surveillance.

And the agreed measures are obviously far from being the end of the road, since the EU executive only conditionally approved Greece’s three-year fiscal plan and warned further cuts in public sector wages would be required (that dreaded internal devaluation) if, as many economists believe, the measures so far announced prove to be insufficient to generate the economic growth which will be needed to meet the steep deficit-reduction targets. Thus the die is cast, and Greece will not, as I recommended, be going to the IMF. Such a move is now seen as superflous, since the EU Commission is steadily transforming itself into a local “mini-version” of the Fund in order to try to handle the cases of those countries who show continuing reluctance in implementing those much needed deep structural reforms. I only hope the Commission have the will to follow this through with all the determination that is needed, since if Greece do now finally go to the IMF for help it will surely now be as an ex-member of the Eurogroup.

Not that this weeks session was entirely accident free. Retiring Economy Commissioner Joaquin Almunia gave yet another example of how clumsy he can at times be, by declaring that “En esos paÃ­ses (Greece, Portugal and Spain), observamos una pÃ©rdida constante de competitividad desde que son miembros de la zona euro” (a “continuous” loss of competitiveness), which appeared in the English language press as: “Almunia Says South Europe Has â€˜Permanentâ€™ Competitiveness Loss“. It isn’t clear to me from this distance whether he was speaking in English and his core message got “lost in translation”, or whether he thought the speech out in Spanish, and the faux pas is down to his advisers. Either way the damage was done, causing even more problems than needed – according to data from CMA datavision, Credit Default Swaps were up on Spanish Sovereign Debt to 151 bps, or up 18.24 on the day. Portugal CDS also rose sharply on the day – 28.47 bps to 195.80.

As Deutsche Bank’s Jim Reid said after the announcement:

Clearly aggressive fiscal tightening can look plausible on paper but the reality is that the path will be full of potential roadblocks. Future strike action will be sign of how prepared the general population is to take the hard medicine. The jury must still be out on this and the market will look to exploit any set backs. However in the short-term the market does seem to have lined up an alternative target.

So the jury still is very much out on just how viable the GDP targets being offered by the Greek government really are. George Papaconstantinou, Greeceâ€™s finance minister, may have told the Financial Times that he expected a return to economic growth from the middle of this year – boosted, he said, by strength in the shipping and tourism industries and the â€œhidden power of consumersâ€ in the shadow economy. But saying this is one thing, and achieving it is another. Growth across Europe will at best be modest this year – let’s say between 0.5% to 1% of GDP at the most optimistic – with labour markets week everywhere, so I think it is rather unrealistic to expect a tourist boom going much beyond the one we saw (or didn’t see) last year, and the same goes for shipping, which is a sector where surplus capacity still abounds. As for those affluent Greek consumers he is talking about, we have to hope they all dig deep into their wallets, and that each and every one of them now insists on a VAT valid invoice!

But so far there is not much sign of this, and retail sales are actually falling steadily (see chart below). In fact I seriously doubt we are going to see much support from internal consumption at this point. Greece is all about exports now, but where are they going to come from? And how is the country going to get a trade surplus big enough to achieve the sort of economic growth they are talking about without a much stronger internal devaluation? 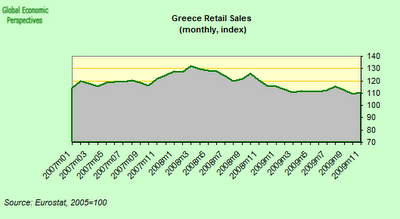 Industrial output has been falling for some time. 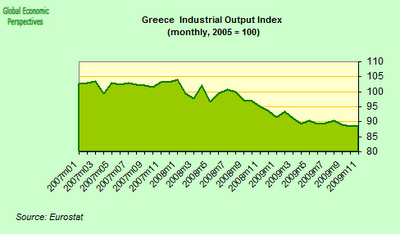 And the latest January PMI only served to underline how Greece was becoming detached from the recovery elsewhere. 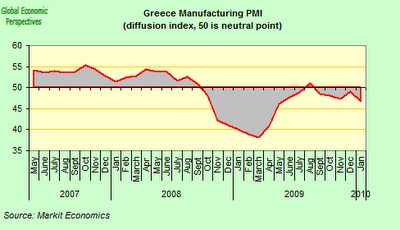 â€œThe onset of the new year brought little hope of a near-term recovery in Greek manufacturing. Accelerating contractions in new orders, output and employment caused the headline PMI to sink to an eight-month low. Meanwhile, firms were struggling to cover rising costs, as strong competition and unfavourable demand conditions rendered them unable to raise charges.

Eurozone unemployment hit 10% for the first time in December, underlining the extent to which the timid economic recovery has yet to translate into job creation. Spain’s jobless rate rose to nearly 20%, and Ireland, which like Spain has also been hard hit by a housing downturn, saw its jobless rate climb to 13.3% from 13%. As is normal Eurostat didn’t have data on the jobless rate in Greece, where, as Market Watch point out, statistics are notoriously hard to come by. The lastest – EU comparable – number we have is for October, but at this point such a data point is the next best thing to useless. A similar situation exists in the construction sector, we have no clear idea of what is happening since the Greek statistics office simply to not supply comparable data to Eurostat.

Meanwhile the drama in the bond markets looks set to trundle on:

Greece’s acute problem is the need to raise financing to allow it to roll over maturing debt in April and May, while preserving sufficient cash to fund current expenditure. We estimate an additional funding need of at least â‚¬30bn by May. The concentration of maturing debt is unusual, but even if this immediate source of stress can be overcome, the funding profile for coming years remains demanding. The next three months will have a heavy bearing on the profile that is followed, but whatever happens, Greece and other peripheral euro area countries will still suffer from a chronic need to improve productivity, raise national savings and cut government borrowing.
Christel Aranda-Hassel, Director, European Economics, Credit Suisse.

An all the doubt continue as to whether, with the fiscal retrenchment process and the competitiveness correct Greece can manage to achieve the debt to GDP reductions promised in their Stability Programme. As Credit Suisse’s Giovanni Zanni puts it, previously

Nominal GDP growth was systematically higher than the average rate of interest paid on the governmentâ€™s debt. The implication was that the government could run significant fiscal deficits and still reduce the debt-to- GDP ratio. It did not exploit that advantage significantly, however, and the Greek governmentâ€™s debt ratio fell only slightly over the period. Things have changed drastically since last year. Nominal growth fell to 0% in 2009. Although it should recover from 2009 lows, we think it will remain subdued relative to the recent past. Even if Greek sovereign credit spreads versus Germany fall back somewhat from the peaks reached last week, it seems extremely unlikely that the favourable dynamics of the past will reappear anytime soon. As such, there are few options open to the government other than to move the primary balance into surplus â€“ a surplus that is sufficient to first stabilise the debt-to-GDP ratio and then push it downwards.

This primary surplus seems a very, very long way off at this point. And Greek bonds fell again yesterday, pushing the premium investors demand to hold 10-year securities instead of German bunds up by 12 basis points to its highest level in a week. The move followed news that Greeceâ€™s biggest union had approved a mass strike while tax collectors began a 48-hour walkout. The Greek 10-year yield jumped 8 basis points to 6.76 percent as of 11:45 a.m. in London. The difference in yield, or spread, with benchmark German bunds was at 365 basis points. It widened to 396 basis points on Jan. 28, the most since before the euroâ€™s debut in 1999. 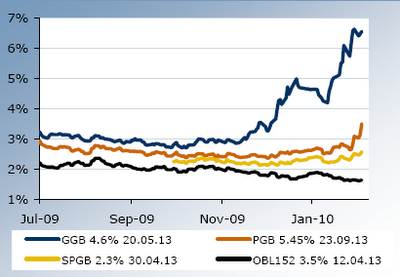 And Citicorp warns that investors may well continue to cut their holdings of Greek bonds amid skepticism the government can overcome public hostility to budget cuts.

â€œAlthough Greece has secured the expected backing from the EU for its latest austerity program, we expect markets to remain very fearful of the potential for the fiscal consolidation process to slide or to be derailed by public dissent,â€ according to Steve Mansell, director of interest-rate strategy at Citigroup in London. Investors, he said, may be â€œmore prone to lighten exposure on any significant spread tightening movesâ€.

And it isn’t only the bank analysts who are not convinced. According to this article in Le Monde IMF head Dominique Strauss Kahn and his close associate Jean Pisani-Ferry, director of the Brussles based think tank Bruegel also have their doubts:

Which in plain English says that they thing the EU Commission has neither the vocation, nor the teams, nor the technical experience to take on a job of this size, and while it is vital that the necessary structures and policy tools are developed, in the meantime the clock is ticking away, and the infection is spreading to the Sovereign Debt of other countries – even as far away as Japan. Basically M. Strauss Kahn seems to feel that the EU Commission is assuming an unnecessarily high risk, and that the Greek dossier should really have been sent to the IMF as a matter of some urgency. I cannot but agree.

17 thoughts on “Greece Gets The Green Light, But Will It All Work?”