Global manufacturing industry ended 2009 on what seems to be a fairly positive footing, with the JPMorgan Global Manufacturing PMI posting a comfortable 55.0 in December, up from 53.7 in November, significantly above that critical 50 growth/contraction dividing line. December’s was the highest reading for 44 months, and the headline Global PMI has now remained in expansion territory for each of the past six months. So this is not a fluke, and growth is being sustained, even if it is not evenly distributed, and is far from being that much hoped for “V” recovery. But of course, what happens to all of this as the stimulus is gradually withdrawn? 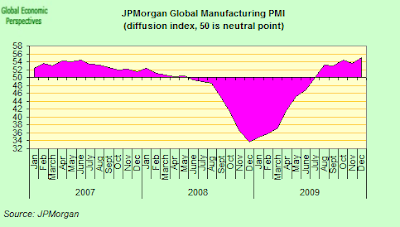 December data also continued to reflect an ongoing expansion in international trade volumes, with growth of new export orders being the fastest in almost two years. The latest increase came from a broad-base, with only Australia, Brazil, Greece, Russia and Spain reporting declines.

The employment situation also continued to improve, and at 50.2 the Global Manufacturing Employment Index signalled the first (ever-so-slight) increase in staffing levels since March 2008. The rise in manufacturing employment was, however, largely concentrated in emerging markets (particularly China, Taiwan and South Korea) and the US. Staffing levels fell in all of the West-European nations covered by the survey, although the rates of decline were slower than in November.

One thing is clear at the present time, and that is that economic growth in Asia is powering ahead at a faster pace than in other regions – and is being led by China and India. The PMI reports for China, South Korea, Taiwan and India all suggest the presence of a widespread recovery. Japan improved for the first month in four, although Japanese exports do seem very China dependent. Australia was the outlier in Asia, with conditions deteriorating from November and the PMI falling back to from 51.2 last month to the present 48.5.

The China HSBC Manufacturing PMI rose to 56.1 in December, up from 55.7 a month earlier â€“ the second fastest rise yet recorded by the survey, which dates back to 2004. The HSBC PMI data also signalled that prices charged by Chinese manufacturers were rising at the fastest rate since July 2008, bouyed by rising raw material costs as well as strong demand. 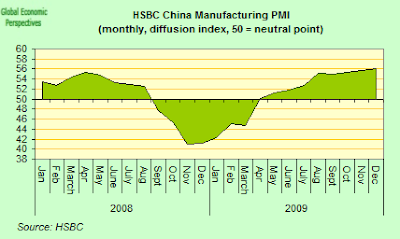 The India Manufacturing PMI, rose from 53 to 55.6 , its highest level since May, when it hit 55.7, the strongest performance of 2009. The positive result was helped by a big rise in the sub-index for new orders, which rose to 60.1, the highest for the year, from 54.6 in November. 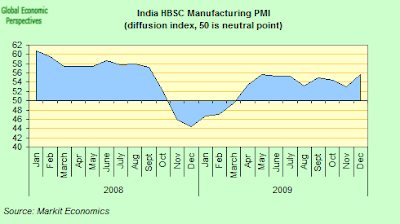 The India PMI has now been above the neutral level of 50 for nine consecutive months, indicating a sustained period of expansion, following a five-month period when it suggested that output was contracting. HSBC said the detailed December survey data suggested that growth was the strongest for 15 months, driven by better economic conditions and business investment. Demand from both domestic and foreign buyers was higher than in November, although the home market remained the principal driver of new business expansion.

The South Korea manufacturing PMI edged up slightly in December to 52.8 from 52.6 in November, indicating a continued expansion of the economy, although the pace appeared to be slowing. The sub-index for total new orders fell from 54.1 to 52.9, and the index for new export orders declined from 52.4 to 50.7. However, both remain in positive territory. 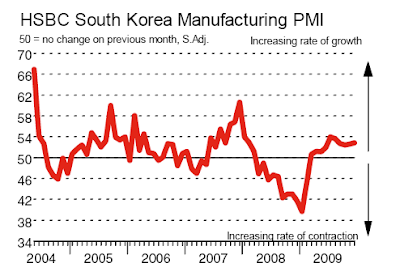 In Taiwan, the manufacturing PMI moved upwards for the ninth successive month, reaching 58.7 from 58.4 in November. The index showed strong demand in both export and domestic markets, although the rate of increase in new orders edged downwards.

Diversity In The Eurozone

In Europe, the situation was more uneven, and characterised by the marked disparities between the performances of the big-4 Eurozone economies. While the French recovery remains robust, the German one continues to look lacklustre. Italy just managed to keep its head above water for the second month running, while the Spanish manufacturing sector remained firmly in recession territory. Greece and Ireland continued to struggle to gain momentum, while in the East Hungary and Russia failed to pass the critical 50 level.

The Eurozone Manufacturing PMI posted 51.6, up from 51.2 in November, the highest level since March 2008, but still well below the global level of 55. 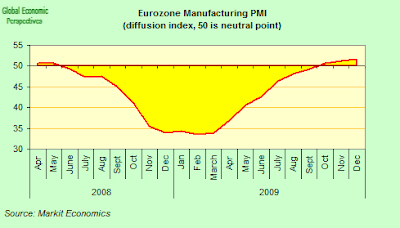 As usual, France lead the way again, with the headline PMI recording 54.7, up marginally from 54.4 in November. Output was raised in response to a further increase in incoming new orders, the sixth in successive months. The domestic market remained the principal driver of growth, although export sales rose at an accelerated pace. Anecdotal evidence suggested that improving market demand and restocking at clients had contributed to the latest increase in new work.
Higher new orders placed pressure on firmsâ€™ capacity, leading to a further rise in backlogs of work during December. The rate of growth of outstanding business was robust and the strongest in three years. If the US is no longer the global consumer of the last resort, France is certainly in the process of becoming the European one. 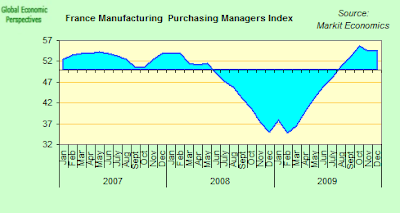 In Germany the final headline PMI registered 52.7 in December, up from 52.4 in November, to indicate the strongest overall improvement in operating conditions since May 2008. However, the final PMI was slightly lower than the earlier flash reading for December (53.1), while the rise in the PMI since November largely reflected slower rates of job shedding and inventory reduction.

As far as I can see, you can read four things here into this December German reading: i)the situation in German manufacturing has improved since May; ii) but not very much (since 52.7 is not a very high absolute reading); iii) he final reading came in slightly v lower than the flash – that could indicate deceleration as the month went one, the good profile is having a higher final reading than the flash one; iv) the improvement came from a slowing down in job shedding (which may suggest increased optimism for the future, retaining staff etc), but not from an increase in output.Conclusion, German manufacturing continues to move forward, but the road is a lot longer and a lot harder than many were expecting. There is no sharp rebound here, nor are we likely to see one. 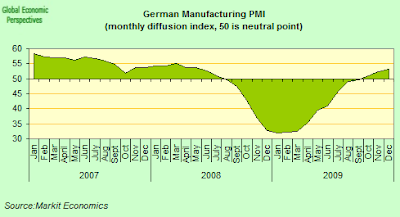 Italy continued to more or less move sideways. At 50.8, up from 50.1 in November, the seasonally adjusted Markit/ADACI Purchasing Managersâ€™ Index only served to underline the fragility of the recovery in Italy, and how easily Italian manufacturing could fall back into contraction. On the other hand Italian manufacturers recorded a solid rise in new export orders during December. The increase in new business from abroad was faster than that recorded for overall new orders, suggesting that demand growth was stronger across export markets than in Italy. 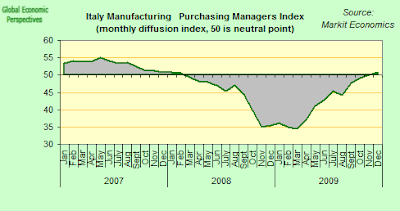 Outside the Eurozone, Swedish industry continued to be the stellar performer with the PMI climbing up to 58.2 points, from 56.o in November, according to data from Swedbank/Silf. This was the highest level over the last year and indeed the highest of any country included in the JPMorgan poll.A strong inflow of orders accounted for the largest positive contribution to the rise in the PMI. The order sub-index rose 5.8 points, with domestic orders rising and export orders falling. Increased orders also lead to higher production plans for the next six month, pushing the production sub-index up close to the 60-point level, while time of delivery continued to increase, yet another sign of stronger economy. Meanwhile, fewer companies reported cutting staff and the employment sub-index rose to 49.5 points. 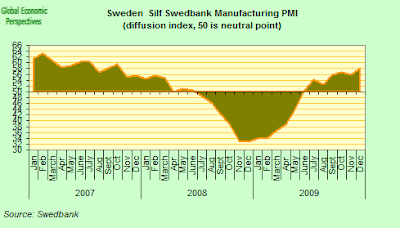 No Strong Performers In The East

Business conditions in Russiaâ€™s manufacturing sector deteriorated yet again in December, suggesting that domestic inflation and the rise in the ruble was continuing to take its toll on manufacturing competitiveness. Output was only marginally higher than in November, and new orders fell for the second month running. Meanwhile, manufacturers continued to shed staff and cut inventories. Input and output prices both rose on the month but, in both cases, the rates of inflation remained historically weak. The headline seasonally adjusted Russian Manufacturing PMI posted a second consecutive reading below the 50.0 no-change mark in December, indicating an overall deterioration in manufacturing business conditions.

The index declined to 48.8, from 49.1, its lowest level since July. Contributing to the downward movement in the index were slightly steeper falls in new orders and stocks of purchases, and a slower lengthening of suppliersâ€™ delivery times. 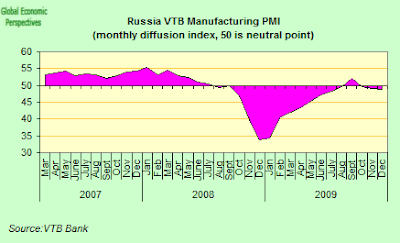 Output in Poland continued to rise, while the Czech Republic just managed to keep its head above the 50 mark. Unsurprisingly, Hungarian manufacturing continued to contract, though at a slightly slower rate than in November. 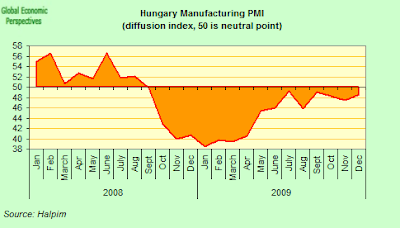 The rate of expansion also slowed in Turkey,and the headline index posted a measly 50.6 in December, indicating only a marginal improvement of business conditions in the Turkish manufacturing sector. The rate of expansion fell back from November and reached the lowest recorded in the current eight-month period of growth. Incoming new business received by Turkish manufacturers only increased marginally in December.

Labour market conditions remain difficult, and employment only increased slightly in December. Staffing levels have now risen for seven successive months, but the latest increase was the weakest since July. On the other hand input prices rose substantially in December, and faster than they did in November. 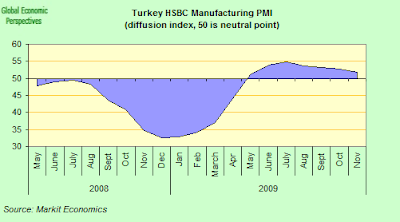 And Dynamic Growth In Both The US And Brazil

In the Americas, both Brazil and the United States showed strong growth – in the US case the reading was a four year high. The Brazilian manufacturing sector continued to expand at a robust pace, and the seasonally adjusted Brazil Manufacturing PMI hit 55.8 in December, up from 55.5 in November – its highest level since November 2007. Output rose for the sixth time in seven months, and at the fastest rate since October 2007. Unfinished business and employment both increased during the latest survey period, pointing to the existence of capacity pressures in Brazilâ€™s manufacturing industry. Staffing numbers expanded at a robust rate that was the fastest for seventeen months. 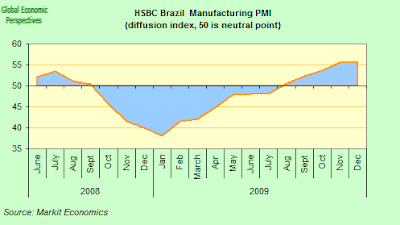 The U.S. manufacturing sector expanded in December for the fifth straight month, according to the Institute for Supply Management report. The ISM manufacturing index rose to 55.9% from 53.6% in November. It was the highest since April 2006. In December, nine of 18 industrial sectors were growing, led by apparel, petroleum, electronics and machinery. Manufacturing is benefiting from the need to restock inventories, according to Norbert Ore, chairman of the ISM’s survey committee. 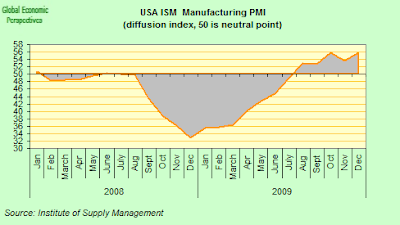