Well, it is not as if I relish rubbing salt into old wounds, but this quote from the latest piece by Ben Hall in Paris and Ralph Atkins in today’s Financial Times is just too good to resist.

French manufacturing output rose at its fastest rate for nine years, according to a survey on Monday, confirming that France has become the economic powerhouse of continental Europe. Purchasing managersâ€™ indices for manufacturing showed France performing significantly better than the continentâ€™s other main economies â€“ thanks to robust domestic demand. 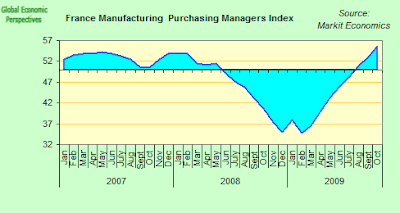 Plenty of food for thought in this paragraph it seems to me. As foreshadowed in this earlier post, it is the French economy – and not the German one – which is rebounding sharply, and this seems to be for essentially three reasons:

i) there is still life in domestic demand, due to the fact that demographics are good, and lending to households (at an average rate of increase of 11%) was a lot less during the last boom than it was in the bubble societies (20% per annum in Spain and Ireland

ii) France’s more favourable demography means that the French government has more space for fiscal stimulus (when compared with Germany) which means the “cash for clunkers” can roll on a bit longer.

iii) the combination of these above two factors means that stimulus actually can work, since it can fire up domestic consumption which is not already dead on its feet. That is, the situation is a win-win one in the classic sense (although, as I was arguing at the end of last week, the ECB will now need to do some pretty adroit monetary footwork if it wants to avoid firing up an asset bubble in France, to follow hot on the heels of the one which has just deflated in Spain.

â€œThe strong recovery in French manufacturing continued in October, with output rising at the fastest pace for nine years. While some of the current strength reflects a rebound from the extreme financial crisis, it nevertheless offers further evidence that the France is towards the front of the pack among developed economies in emerging from the downturn. Domestic demand remains the key driver of growth as confidence continues to recover.â€

The current recovery could be conceptualised as a group of Tour de France cyclists set on scaling the slopes of the notorious Tourmalet. One group of riders – mainly emerging economies like China (current PMI 55.4), Brazil (53.7), India (54.5) and Turkey (52.8) are out in front, with just two developed economies having “escaped” from the main group to try and catch them, France (55.6) and Sweden (56.7). 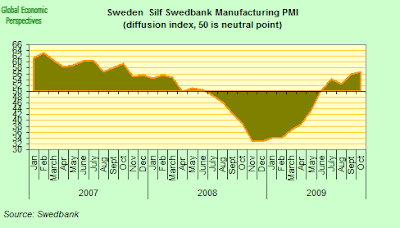 Then comes the main group, who continue to show a modest recovery, howevering around or even (at last) somewhat over the 50 point break even mark (Germany (51), the US (55.7), Japan (54.3), the UK (53.7), the Netherlands (50.5), Austria (51.1), etc). In Eastern Europe, the Czech Republic (49.8) and Poland (48.8) though still weak continue to gain ground, while the Russian team this month unexpectedly had a puncture, and dropped back into contraction territory (49.6), after registering growth in September. 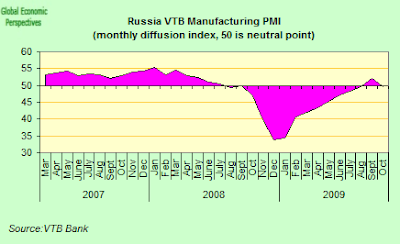 And then come the stragglers lead by Italy (which is peddaling furiously, but – with a PMI of 49.2 – doesn’t seem to ever quite make it over that critical 50 mark, oh well, next month perhaps),followed closely by Hungary (48.2), Greece (48), Ireland (48), South Africa (47.8) and of course, in last place, I think the rider is now so weary he is getting off to walk the bike up the hill, comes poor old Spain (46.3), where more or less predictably, the contraction continues. In particular Spain stands out as almost the worst case scenarion now, with a manufacturing sector which continues to bleed jobs in a country where no one seems to have any serious proposals about what to do except wait in the hope that things might get better eventually, and of their own accord. The sky in front with always be clearer maÃ±ana, of course.

â€œItalian manufacturers reported that their recession which has spanned eighteen months finally ended in October, two months behind the Eurozone as a whole. Production rose for the first time since March 2008, driven by a marginal return to growth of new orders. Although the October survey represents a step in the right direction on the road to recovery, weakness persists which suggest that a sustainable upturn is by no means guaranteed.” 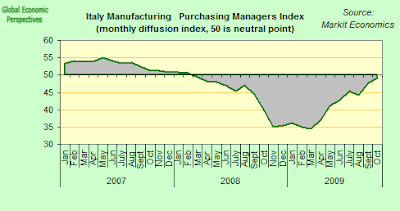 Hungary’s manufacturing purchasing manager index dropped 0.8 percentage points to 48.2 points in October, according to the Hungarian Association of Logistics, Purchasing and Inventory Management (HALPIM). The October reading suggest the steady improvement that started in the spring may now have come to a halt. 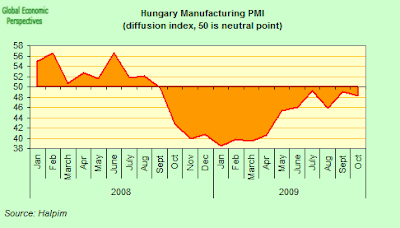 The seasonally adjusted Markit Greece Purchasing Managersâ€™ Index fell marginally to 48.0 in October from 48.5 in the previous month. The latest reading signalled another slight deterioration in operating conditions across Greeceâ€™s manufacturing economy. 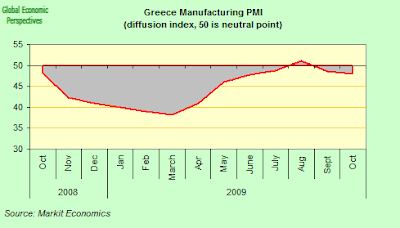 â€œThe hope raised in August of an imminent recovery in Greek manufacturing production has dwindled somewhat over the past two months, as the PMI has sunk back into negative territory. Nevertheless, the headline index continued to signal only a slight weakening of the business environment. Additionally, almost all of the surveyed variables are improved on their twelve-month averages â€“ in most cases noticeably so. These are clear signs that progress has been made and therefore show that the sector is on the right path to stabilisation and recovery, even if it has not quite got there yet.â€

In Ireland the October data indicated that, while operating conditions at Irish manufacturers continued to deteriorate during the month, the sector moved a step closer to recovery. Both output and new orders fell only slightly, and purchasing activity decreased at a markedly slower rate. The seasonally adjusted NCB Purchasing Managersâ€™ Index rose to 48.0 in October, from 46.6 in the previous month. This signalled that the rate of deterioration in business conditions eased to the weakest since February 2008.

â€œThe output and new orders components very nearly breached the sacred 50 mark in October. New export orders did however fall away marginally after breaching 50 last month. The fall in new export orders reflected sterling weakness which is continuing to squeeze the manufacturing sector. With UK exports under pressure it is a welcome sign that the US economy posted impressive GDP growth in Q3, even when account is taken of their scrappage scheme. With global economic activity gathering momentum we are still hopeful that the Irish economy will begin growing in Q4 of this year and the latest PMI was comforting in this regard.â€

South Africaâ€™s purchasing managersâ€™ index rose to its highest level in 16 months in October as the countryâ€™s first recession in 17 years eased, according to the monthly report from Kagiso Securities. The seasonally adjusted index increased to 47.6 from a revised 45.9 the month before. The index has been below 50, which points to a contraction in output, since May 2008. 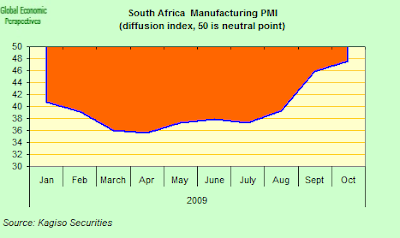 Operating conditions in the Spanish manufacturing sector continued to deteriorate in October. Output fell further over the month, while new orders contracted at the sharpest pace since May. Supplier lead-times lengthened for the first time in nineteen months.

The seasonally adjusted Markit Purchasing Managersâ€™ Indexcontinued to signal a marked decline in overall business conditions, posting 46.3 in October. Operating conditions have worsened in each month since December 2007. Output decreased modestly in October as the wider recession in Spain continued to impact negatively on demand. Production has now contracted in twenty of the past twenty-one months. 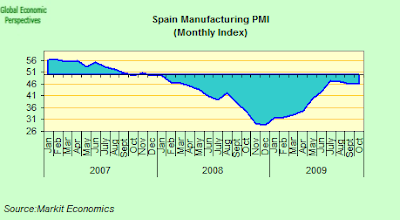 â€œSpain’s recovery continues to lag the upturn seen across the Eurozone as a whole, and a steeper contraction of manufacturers’ order books in October will be of particular concern as it points to a further delay to any prospects of stabilisation.Competition is so intense that firms are being forced to slash prices, despite their raw material prices increasing. The stabilisation of unemployment in the third quarter signalled by official figures is likely to be only temporary with PMI data continuing to show considerable falls in employment in the manufacturing sector as firms seek cost cuts.â€

Global Improvement – But Watch Out For The Stragglers, And Those Overly Dependent On Exports

So, as JPMorgan say in their Global Manufacturing report, the Global Manufacturing PMI hit a 39-month high in October, and at 54.4 posted its highest reading since July 2006. The PMI has now remained above the neutral 50.0 mark for four successive months. But while the general picture is one of solid, if modest, growth, the group of stragglers at the back of the pack (to which would could add names like Latvia, Portugal, Romania, Finland, and Ukraine, where PMI surveys do not currently exist) point to potential problems further on down the line in 2010. 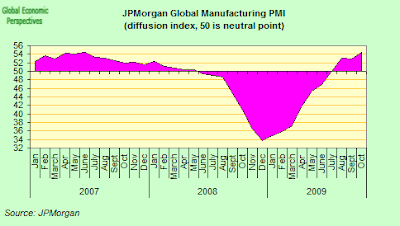 Also of concern is the way the index in export dependent countries like Germany and Japan (both suffering the added impact of having a high currency following the ongoing dollar weakness) continue to struggle for air. This is more apparent in the German than the Japanese case at this point, but the survey organisers specifically highlightend the way in which survey respondents in Japan are already reporting a lack of “bounce” in export orders, and this once more serves to highlight the weak spot in the current recovery picture – where are all the customers for all those exports eventually going to come from.

â€œOctoberâ€™s Japan Manufacturing PMI fell for the first time in nine months, by 0.2 points to 54.3. It remains above the key dividing line of 50.0, indicating that production activity continues to recover, but suggesting that the pace of improvement is slowing. The New Export Orders Index, a leading indicator of Japanese exports, fell 2.5 points to 51.6. Although this is the fifth consecutive month in which the figure has been higher than 50.0, the October reading suggests that the pace of improvement has obviously slowed. An improvement in export demand was the main factor behind the rebound in Japanese manufacturing output. Therefore, we think that the strong rebound in production activity in Q2 and Q3 now looks likely to run out of steam from 2009 Q4.â€

This final point, along with the negative impact that problems among the “stragglers” may present for the main group later on up the hill suggests, to me at least, that while many emerging markets remain strong, we will almost certainly not see anything resembling a “V” shaped global recovery, and especially not in the OECD countries. As far as I am concerned this hypothesis can already be safely discarded.