The FT says this is worse than feared, and I say it is just what I was expecting (see here, I do hope that doesn’t make me one of those “visionaries” you are all so busy talking about).

Germanyâ€™s economic slump in the final quarter of 2008 proved worse than feared, official figures showed on Friday, with the country posting the sharpest fall in gross domestic product since the country was reunified in 1990.The larger-than-expected 2.1 per cent plunge in GDP in the final three months of the year showed Europeâ€™s largest economy contracting at a faster pace than the UK in the same period and threatening to drag down the performance of the 16-country eurozone. 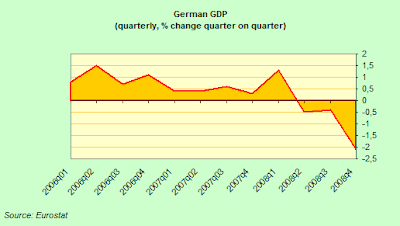 A 2.1% quarterly contraction, for those who are confused by the way we economists do things is equivalent to an 8.4% annualised rate of contraction, which is quite something (although in fairness some of this comes from Q3 when there was a big build up in inventories, which has now unwound). But the real question, when all the dust settles, is going to be why it is that economies like those in Germany and Japan are so incredibly export dependent (remember, all those “decoupling” arguments which were so in fashion not so long ago). My view is “its the demography silly”, but then we can’t go back 30 years and change all that with the wave of a wand, so we really don need some out of the box thinking on the global imbalances soon (see Claus’s arguments in his last post).

Meantime the EU are working furiously away on the next “top secret” European bank bailout proposal (does this have anything to do with the unexpected rapid departure of Michael Glos last weekend? – all of this was most strange, see here). Details are sof the coming bank bailout proposals are still scarce at this point, but the excitable Telegraph do come up with a very hair-raising number (16.3 trillion pounds, see here). As I have been arguing, far from Germany subsidising the rest of the EU, Germany may well be at the heart of the bailout, needing support from the rest of us, which is why we need EU bonds, and we need them now. United we stand, divided we go down the plughole!

And if you have any doubt about the export connection, just look at the chart below, not an exact fit, but an obvious close correlation. Germany needs a demographic fix, simply going for longer shopping hours (and the like) won’t work in a case like this. 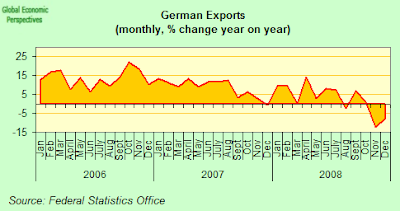 And as for labour market reforms, just look how many jobs Germany created this time round. 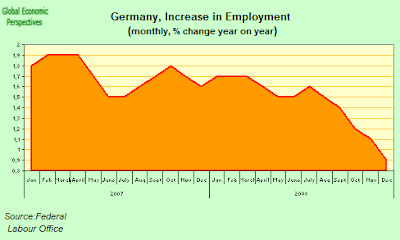