When we look back five years from now, will we see this week as marking a turning point in the short, but far from uneventful, ten year history of Europeâ€™s common currency? Certainly recent comments by the deputy governor of the People’s Bank of China have made evident what was already implicit: the dependence of EU sovereign debt on sentiment in global markets, especially in Asia and the Americas. Simon Derrick, chief currency strategist at Bank of New York Mellon even went so far as to say the trauma of recent days might well signal the point that we stop talking about a â€œGreek debt crisisâ€ and start talking about a â€œEurozone structural crisisâ€ . And while Herman Van Rompuy, president of the European Council, was telling us on the one hand that the eurozone will never let Greece fail, Jane Foley, research director at Forex.com busied herself explaining, on the other, that any involvement of the International Monetary Fund in helping Greece to stabilise its fiscal position only heightens the risk that the country might one day end up leaving the eurozone. So just where are we at this point?

Basically it is important to recognise that the current crisis has placed the spotlight on the severe institutional weaknesses which lie underpin the common currency, and it is just these weaknesses which are leading so many commentators to now ask themselves whether it might not have been easier to implement political union in Europe before embarking on such an ambitious monetary experiment.

These weaknesses became even more clear on Thursday when Jean Claude Trichet went very public in making clear that he personally is totally opposed to IMF participation in any Greece “rescue”. â€œIf the IMF or any other authority exercises any responsibility instead of the eurogroup, instead of the governments, this would clearly be very, very bad,â€ he said on Franceâ€™s Public Senat television. And this on the same day as Angela Merkel and Nicolas Sarkozy were publicly celebrating the triumph of the “Franco-German” entente. Clearly there are still many rivers left to cross before we can say we have reached the other side in this particular structural crisis.

Basically the issues facing Greece are now not primarily fiscal ones. The issue is how to get growth back into the economy fast enough to stop deflation and the economic contraction taking away all the good work acheived through fiscal cutbacks, and how to finance Greek borrowing at a rate of interest which stops the level of indebtedness spiralling upwards out of control.

The Economist magazine have done their own calculation on this, and they estimate that a loan of â‚¬75 billion rather than the currently rumoured â‚¬25 billion will be needed and that the country is likely to need five years (rather than three) to get its deficit down below 3% of GDP. They also assume that Greek GDP will be 5% below its current level by 2014. Obviously the output you get in these sort of calculations rather depend on the expectations you put in, but these are not unrealistic expectations.

As I explain in this post on the debt snowball problem, only two things really matter at this stage, the rate of change in nominal Greek GDP (that is non price adjusted) and the rate of interest charged on the sovereign debt. As regards nominal GDP, the Economist assume a 5% contraction in 2010. This may seem rather steep, but it does include an anticipated fall in prices as well as a drop in GDP. My own calculations suggest a drop in real GDP of about two percent, rather than the somewhat higher numbers others are talking about. I suggest this number is more realistic given the degree to which the trade deficit is likely to correct, and the net trade impact on headline GDP numbers. 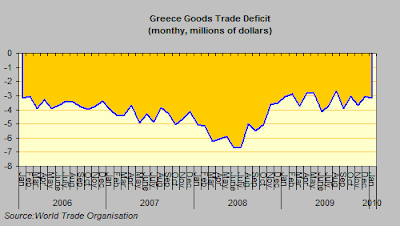 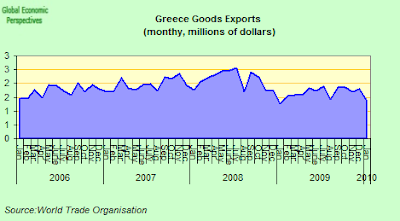 As far as prices goes, I think a one percent fall in the CPI is a reasonable guess at this stage. If you look at the chart below you will see that interannual Greek inflation is still well above the EU 16 average, but prices have now been falling since November, and even though we shouldn’t neglect the impact of tax and public sector tariff increases, prices will almost certainly be down in December 2010 over January. The big difficulty is estimating by how much. 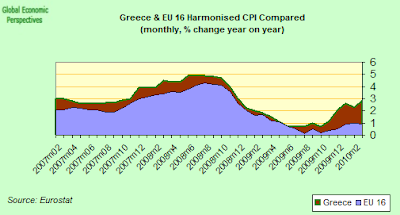 One of the key issues facing Greece at the moment, with large parts of its outsanding debt needing to be refinanced, is just what rate of interest (or extra spread) will have to be paid on any loan (I deal with this question in this post). This is almost a key question, since it can become a “life or death” issue in determining whether or not the country will be forced into default. But here both the EU and the IMF have a problem, since if the Euro Group countries make a loan at a level near to the the current price charged for German debt (which is what should happen if we argue Greek debt carries no additional risk since we are all guaranteeing it), then other countries who are currently paying more (Spain, Ireland, Portugal, Austria etc) may ask why they also could not have such favourable treatment. On the other hand, asking the IMF to make a cheaper loan causes problems, since it could be seen as subsidising Europe in sorting out its problems, and this might not be easily understood in Emerging Economies where there are evidently many more needy cases than Greece’s to think about.

The bottom line is that there is no easy answer here, and Europe is struggling to convince the rest of the world that it has both the will and the instruments to effectively tackle the problem of maintaining a single currency in a diverse group of countries. Herman Van Rompuy said on Friday there was no danger of Portugal being sucked into the same sort of debt whirlpool as Greece, and that Portugal would not be the next country to be sent over to Washington in search of a helping technical hand from the IMF. Which raises the question: if it won’t be Portugal, who will it be?

49 thoughts on “From A Greek Debt Crisis To A Eurozone Structural One?”