Well, these are not easy times for those who are economically active in Spain, and doubly not-so when many of those with money to spend over the holiday season decide to take advantage of the cheap pound and go and spend it over in the UK (in fact in this Somerset village they are already accepting one euro for one pound sterling). But this is only the tip of the iceberg and, as we will see below, retail sales inside Spain are now steadily falling by the month, with no reversal to this trend anywhere in sight. Not this year, not next year, and probably not the one after either.

But first off, lets start with the news of the moment, Spain’s falling (or could we say disappearing?) industrial output.

Now, as I noted in my last post, according to the JPMorgan Global Manufacturing PMI report for December the weakest manufacturing performance was registered by Japan, whose output and new orders indexes fell to levels which were unprecedented in the history of any of the national manufacturing surveys included in the global manufacturing PMI. But at the end of the day this must have been a pretty close call, since while the composite reading for Japan was only 30.8, for Spain it was 28.5. Thus, on aggregate, Spain’s manufacturing sector was still leading the global charge down. Of course, if we are only talking about industry the situation in Japan is more critical, since the economy there in general is more dependent on manufacturing industry than the Spanish one is. The thing is – we will know on Monday – the services reading for Spain in December may not be much better. 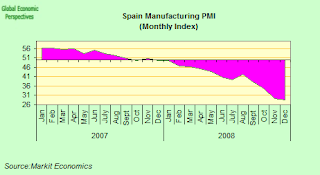 Thus Spain’s manufacturing sector shrank at a record pace for the fourth month running in December, according to the Markit Purchasing Managers Index. The indicator fell to 28.5 from a previous low of 29.4 in November and marked the lowest level for any country in the near 11-year history of the survey. Around 43 percent of Spanish manufacturers in the PMI survey said they cut jobs in December to compensate for falling production, marking the highest level of layoffs in the series history and taking the employment indicator to a world series low of 29.4. Jobs have now been cut in the Spanish manufacturing sector for 16 consecutive months.

“The truly horrendous PMI data for December mean that Spanish manufacturing heads into the new year with little reason for optimism – 2009 is all set to be a very difficult year,” said Markit economist Andrew Harker.

December PMI data also showed the second steepest contraction on record for both new domestic and foreign orders, with cancellations from the United Kingdom, France and Germany

Spanish retail sales (at constant prices) were down by 9.6% year on year in November, according to data from the national statistics office. 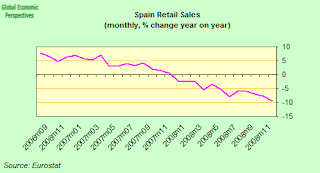 This was the twelfth consecutive month of year on year declines, and retail sales hit a seasonally adjusted monthly high in November 2007 (see chart below), since which time they have continued to fall, and will continue to fall for some considerable time to come. Quite frankly I have no idea at all about when they will get back to those “heady” levels of late 2007, certainly not in 2009, and most probably not in 2010. And after that we will see. 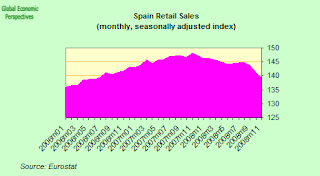 Spain’s factory gate prices fell sharply between October and November – by 2.6% month on month, bringing the annual rate of producer price inflation down from 5.9% in October to 2.9% in November.

Now falls like this are certainly not “normal”, and are an indication of massive underlying structural forces. Let us remember what JP Morgan said in their December report:

“The Global Manufacturing Input Prices Index posted 31.3, its lowest ever reading. The rate of deflation was especially marked in the US, were purchase prices fell to the greatest extent since June 1949. Rates of decrease in costs hit series records in the Eurozone, Russia, Switzerland, the Czech Republic and Denmark.”

So basically, if the PMI readout is anything to go by we could well hit negative year on year prices in December, and if not then certainly in January. As can be seen in the index chart below, prices have already been falling since July. All of this is quite important since producer prices give us an early indicator of the likely path of consumer prices in the coming months, which means, I think, that the deflation threat in Spain is a very serious one indeed. 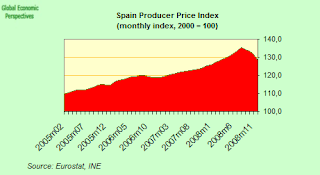 Another Wave Of Credit Downgrades In The Works

Hardly surprisingly in this environment, Spanish financial organisations are now seeing quite frequent downgrades in their credit ratings. The latest here – as Jaime Pozuelo-Monfort reminds us on RGE Europe Monitor – Caja Mediterraneo (CAM) and Bancaja who have been downgraded by Standard and Poorâ€™s from A- to BBB+ with negative outlook. At this point CAM and Bancaja still maintain their investment grade status, which is held for ratings of BBB- and above. Prior to the Standard & Poorâ€™s downgrade, CAM and Bancaja were also downgraded by Moodyâ€™s (who use a different classification system) in August 2008 from A2 to A1.

This little extract from Europa Press, which explains how Banco Pastor have decided to “dispense with the services of” Standard and Poor’s is also interesting for those of you who can read Spanish, as is their explanation for why they have done it (which, naturally, has nothing whatsoever to do with their October downgrade from A to A-) , which is basically that since the wholesale money markets are closed to Spanish banks then they can live without getting rated anyway. What’s more, they say, the guarantee they are sure to receive from the Spanish Treasury for their forthcoming issues (watch out Spanish taxpayers) makes the ratings agencies unecessary. Amazing! I couldn’t have believed it if it hadn’t actually happened.

The article also informs us that the Caja de Ahorros del MediterrÃ¡neo (CAM) and Caja de Ahorros de Valencia, CastellÃ³n y Alicante (Bancaja) also asked to end their contracts with S&P’s following their respective downgrades. Petlulence will get you nowhere my child!

Property Prices Down Too

Spanish Property Buff Mark Stucklin reports that even on the rather questionable official House Price Index, published by the National Institute of Statistics (INE) average Spanish property prices fell by 3% over 12 months to the end of the third quarter. Mark comments that:

The index, which has only been published for 2 quarters, needs to be treated with scepticism, as its figures are simply not credible in the current market. In reality, prices are sharply down, though nobody knows by exactly how much. And as I have pointed out here before, new build prices in the official statistics do not reflect the prices developers are offering today to make sales. With a glut of around 1 million new properties, and developers falling like flies, industry sources report that new build prices are falling fast.

He also informs us here that Catalonia is suffering more than other parts of Spain. Taking data from reports published by webportal Idealista.com, he explains that sales have fallen by around half, new housing starts are down by 80%, and prices are falling significantly. In Barcelona city, prices are down 8.6% over 12 months, pushing resale prices back to where they were in 2005. Prices are falling more in Barcelona than in Madrid, Valencia or Seville.

According to the latest data from idealista.com, a leading Spanish property portal, nominal prices in Barcelona capital have fallen 10.6% in the last 2 years, which translates into a fall of 16% in real terms (after adjusting for inflation). A typical flat of 70m2 is now 30,000 Euros cheaper than it was 12 months ago.

Over 12 months the asking prices tracked by idealista.com have fallen by 14.7% in Sants-MontjuÃ¯c, 12.9% in Sant Andreu, 12.7% in Horta-GuinardÃ³, and 11.7% in the Ciutat Vella, Barcelonaâ€™s famous old town Gothic Quarter. Coastal resorts around Barcelona popular with second home buyers are also in trouble. Asking prices have fallen by 15% in Malgrat, Pineda y PremiÃ  de Mar, 13.3% in Roses (Costa Brava), and 13.5% in Segur de Calafell (Costa Dorada).

And finally, for this batch, Mark also draws attention to the way in which Spanish banks are increasingly turning themselves into property companies.

Spanish banks are turning into some of the biggest real estate companies in Spain, just as they did during the last property crash of the late 80s and early 90s. To a greater or lesser extent, banks are running some of Spainâ€™s biggest listed developers, companies like Colonial and Metrovacesa, who were forced to throw themselves at their bankersâ€™ feet when they couldnâ€™t cope with their billions of Euros of debt.

Itâ€™s not just the big developers with billions of Euros of debt that the banks are having to take over to prevent their loan default rates from going through the roof. All around Spain many small regional banks and savings banks have been quietly taking over small local developers for the same reason. Having taken over developers or their assets in return for cancelling debts, many banks and savings banks, known as cajas, now find they own a wide variety of real estate assets from land and flats under construction to finished developments and business parks.

As Mark also points out the banks seem to be taking some consolation from the fact that on both previous occasions this move turned out to be extremely profitable to the banks as boom followed slump, and prices rebounded. But what if this time it is different. What if this time – following the trail blazed by Japan in 1992, and Germany in 1995 – prices come down and stay down; for decades.

Oh yes, but don’t worry, not everything in Spain is going down. Unemployment, for example, is surely going up, and strongly so, as we will more than likely find out on Monday. So, in true Goethean spirit, ready yourselves, since onwards and upwards they will undoubtedly lead us.

7 thoughts on “Everything But The Sky Falls-in On Spain”