GDP releases are, by their very nature, lagging indicators and thus do not tell us a whole lot about the current momentum in an economy. Moreover, the immediate focus of attention in the Eurozone remains, and rightly so, the situation in Greece (and Spain), and what precise plans are likely to emerge from the busy schedule meetings which is taking place between Eurogroup and EU finance ministers and heads of states. Yet, despite all the known shortcomings, GDP data remains our basic source of information about the health and progress of our economies, and with the Q4 data out today and the 2009 GDP summary we are able to arrive at some sort of interim conclusion [1] on what was obvioiusly an absolutely abysmal 2009. More importantly we are also able to take stock of a recovery which permanently promises to arrive, but never actually seems to do so, much to the chagrin, I am sure, of the various Eurozone policy makers (click for better viewing) 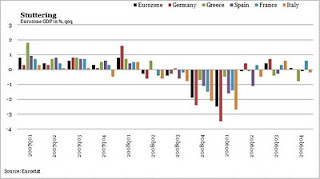 Call me smug if you will, but I for one am not surprised to see that France is all over this reading and basically it is thanks to France that the Eurozone is seeing growth at all. I would venture the claim that this is the beginning of a trend. In terms of the figures, the Eurozone (EU16) grew 0.1% from Q3 when the economy pulled out of recession by growing 0.4% qoq. The figure was primarily held down by continuing contractions in Greece and Spain (-0.8% and -0.1% respectively) as well as of course the stagnation in Germany where the growth rate was flat at 0% qoq after a strong showing in Q3. In Italy, the strong rebound in Q3 GDP at 0.6% qoq was somewhat given back in the form of a -0.2 contraction in Q4.

The biggest losers with respect to national output remain Spain and Greece. Yet, the rest, save France, do not seem to be able to take up the slack for the these two hitherto dynamic sources of demand. The Economist pinpoints the order du jour quite adequately;

The main problem is a familiar one: consumers within the euro zone are not spending enough and the strong currency is making it hard to tap demand in the rest of the world. The best hope for a home-grown stimulus is Germany, where firms and consumers had practised thrift when the rest of the world indulged in a spending boom. Sadly Germany still relies too heavily on exports. Consumer spending and investment both fell in the fourth quarter and were it not for a boost from foreign trade, the German economy would have shrunk. This week Axel Weber, the head of Germanyâ€™s central bank, gave warning that cold weather could mean that GDP falls in the current quarter.

Other countries are tapped out. Spain was once a rich source of internal euro-area demand but its consumers are now weighed down by debts accumulated during a long housing boom. The unemployment rate is perilously close to 20% and its rigid jobs markets mean it is unlikely to come down soon. Bond-market pressures mean Spain’s government is having to withdraw some of its support to the economy sooner than it would like. The wonder is that Spain is not in a deeper funk. GDP fell by 3.1% in the year to the fourth quarter, not much worse than in Germany.

Basically, this is like a relay race where the change of baton has gone horribly wrong. Consequently, we were supposed to see a rebalancing of intra-Eurozone growth whereby the consumers of Spain, Greece etc were given a much needed break with those of particularly Germany taking over. This has not materialised and while France is still standing strong it is hardly enough to propel the entire Eurozone economy let alone its export dependent economies growing rapidly in number. I have argued several times that this exactly is now set to be an enduring feature of the Eurozone as an economic entity which of course makes it even harder for those intra-Eurozone imbalances to be resolved in an orderly manner.

Additionally, Eurozone growth or the lack of an even more catastrophic contraction in some member countries is still driven by large fiscal deficits. In this way, it does not take much economic intuition to see that if 2010 is set to be the year of the big fiscal scare (in a global context) the natural and inevitable retrenchment of fiscal deficit spending is going to reveal, in all certainty, just what the underlying growth momentum is. Personally, this is where I think the biggest negative surprise will come in terms of overall activity measured by national output.

More generally something, naturally, has to give here and according to the FT’s Martin Wolf, Germany needs to return the favor as he puts it, or more specifically; the Eurozone needs German consumers.

(…) Germany was able to offset extreme domestic demand weakness with robust external demand, from both inside and outside the eurozone. Indeed, as much as 70 per cent of the increase in Germanyâ€™s GDP between 1999 and 2007 was accounted for by the increase in its net exports.

Germany needs to return the favour. More precisely, the only way for eurozone countries to slash huge fiscal deficits, without their economies collapsing, is to engineer another private-sector credit bubble or a huge expansion in net exports. The former is undesirable. The latter requires improved competitiveness and buoyant external demand. At present, none of this is available. It is difficult to regain competitiveness when the euro is strong, partly because Germany is so competitive, and eurozone inflation also so low.

This argument is similar to one Mr. Wolf made recently on Japan and in the context of which he and I had a tÃªte-Ã -tÃªte on just what the possibilities are for Japan’s economy and its consumers to stage a recovery driven by domestic demand. My argument and beef with Mr Wolf is the same here. Thus, it is not because I think that Wolf is wrong and certainly not because I cannot see the fundamental need for Germany to attempt a rebalancing of its economy. However, the key question here is not what Germany needs to do, but whether it is feasible to expect Germany to pull forward the Eurozone through growth in domestic demand? I think it is not and I think you need to take a long hard look at the increasingly ageing German population and how this feeds into the ability of the economy to generate growth based on domestic demand.

Yet, as Martin Wolf adequately pointed out to me during our bataille on Japan that argument hardly brings anything to the table in terms of solution. I concur that it does not in the state that I present here. Yet, the consequence of the argument (and thus in some sense the solution) is very clear I think. If the Eurozone before the financial crisis had economies that were able, or who were allowed/pushed onto an unsustainable growth path where domestic demand/credit flourished it does not have these economies anymore (save perhaps France). It follows logically from this that while Germany (and Italy) was the main export dependent economy in the Eurozone before the financial crisis, the whole Eurozone is now effectively dependent on exports to grow. Notwithstanding the Economist’s point that this means the recent weakening of the Euro is actually a blessing, it also provides a very important perspective to the discourse on the global imbalances and how to unwind them.

It is all about the Eurozone at the moment of course and not so much about the Q4 reading but more fundamentally about the Eurozone/EU itself in the wake of the growing economic crisis in Spain and most notably Greece. My good friend Edward Hugh is pretty much pushing forward the discourse at this point (on Spain and in general) especially with his new blog for the newspaper Expansion (in Spanish!, but see also this) as well as his amusing yet important post on Chart Wars featuring as prominent a cast as the recent economics nobel laureate Paul Krugman and the Kingdom of Spain itself. Meanwhile, in a different media another good acquaintance of mine, Jonathan Tepper from Variant Perception, has an interview on the economic situation in Spain which is also much worth a look. Finally, I had a piece this week on the Guardian’s Comment is Free edifice which got a host of interesting comments.

[1] – We don’t have a detailed break-down yet on the country and Eurozone-wide level.