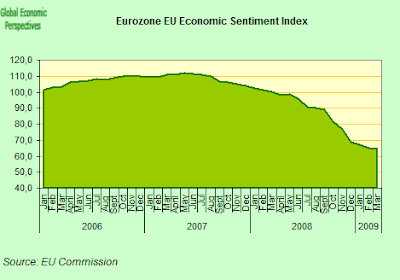 Both the EU Economic Sentiment Indicator (ESI) covering the EU 27 and the eurozone only one declined again in March, though the pace of decline was slower than in the first two months of the year. The indicator fell by 0.6 points in the EU, and by 0.7 points in the euro area, to 60.3 and 64.6 respectively. As a result the indicators for both regions now stand at their lowest levels since the current series was launched in January 1985. 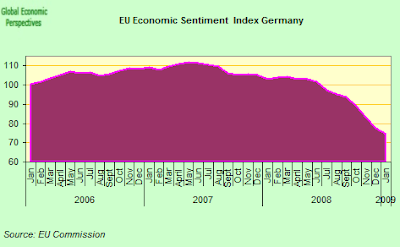 The EU Commission attribute the fall in the ESI to deteriorating sentiment in the industry and services sectors, which both fell by 2 points, and in both regions. In other sectors, the picture was more mixed. Consumer sentiment stabilised in the EU, but fell by 1 point in the euro area. Retail trade increased by 2 points in the EU and by 1 point in the euro area, reinforcing the rebound which started in February. Unfortunately this rebound in sentiment is only reflected in the sales numbers insofar as the rate of contraction (and only in some cases) is declining. 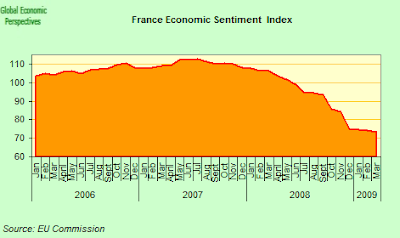 Construction sentiment remained stable at the February level in both regions. Among the largest Member States, Italy saw the most significant decline in sentiment (-4.5 points), while the fall has been more marginal in France and Poland (-1.0), Germany (-0.8) and the UK (-0.4). Economic sentiment recovered slightly in the Netherlands (1.3) and (amazingly) in Spain (0.8). 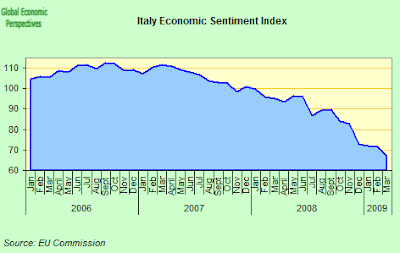 The financial services confidence indicator â€“ not included in the ESI â€“ improved by 1 point in the EU but deteriorated by 4 points in the euro area, reversing the previous month’s gain. Compared to February, managers’ expectation of demand for their services worsened in both areas â€“ significantly in the euro area, but to a much lesser extent in the EU. 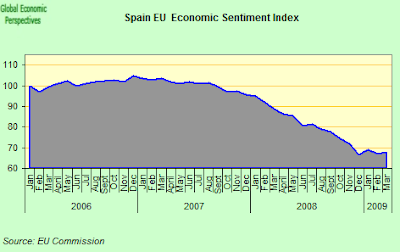 To a certain extent each country is a “world unto itself” and this can be seen in the shape of the respective index curves. 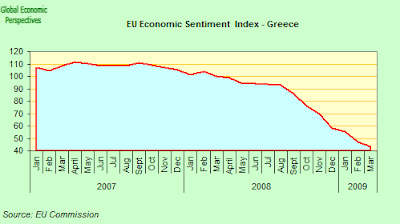 The economic climate is now deteriorating all over Eastern Europe, but the crisis has set in rather later than in the West. In Romania, for example, the deterioration clearly starts after October. 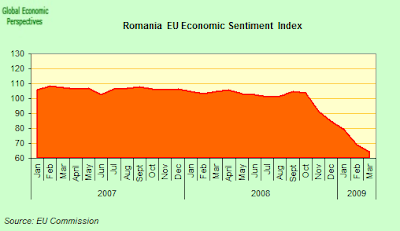 In central Europe the decline has been a little more muted than elsewhere, as can be seen in the Polish case. 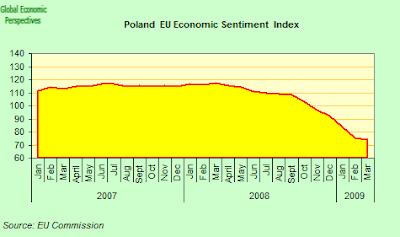 The fall in the Czech Republic has been rather steeper than in Poland, although interestingly both countries “steady up” a bit in February and March, and I wonder to what extent this is a by-product of the German stimulus package, since Germany is a major customer for exports in both cases. 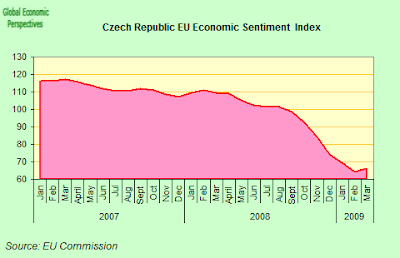 Hungary is, of course, the worst case, and the decline has been unremmiting since late summer. The Hungarian index is now the lowest (32.7) in the entire EU 27. 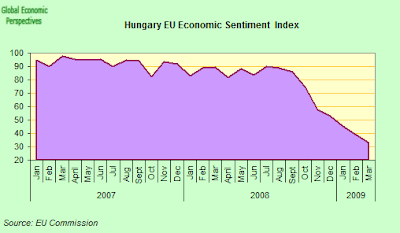 The Baltic decline is much smoother than the others, for the simple reason that it started much earlier (spring 2007). The end point looks to be not that different though – even if it is unlikely that many will see GDP contractions which are so sharp as the double digit ones which are now looming in the Baltics. 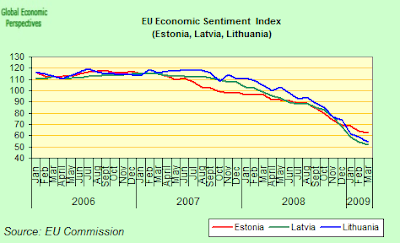 The Eurozone In The East

The two euro area members in the East also have quite an interesting profile. The drop in Slovania is quite dramatic after October (just like Romania) even though the euro in theory gives more protection. This will make an interesting topic for research papers long after the present crisis is over. 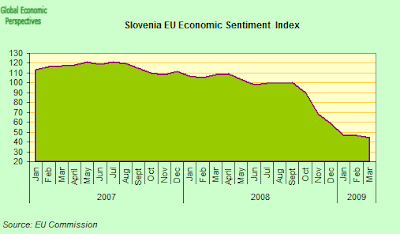 Slovakia’s drop is much more steady, so there doesn’t seem to have been much of a “euro entry” boost, which may, or may not, be a good thing. In any event the decline in sentiment is striking, and gives more food for thought following Moody’s recent warning on Slovak competitiveness. 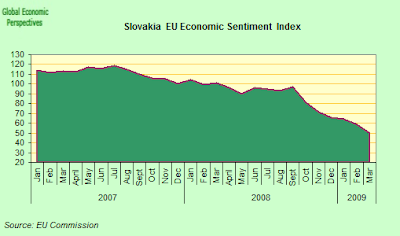